Who will pay for Manju? 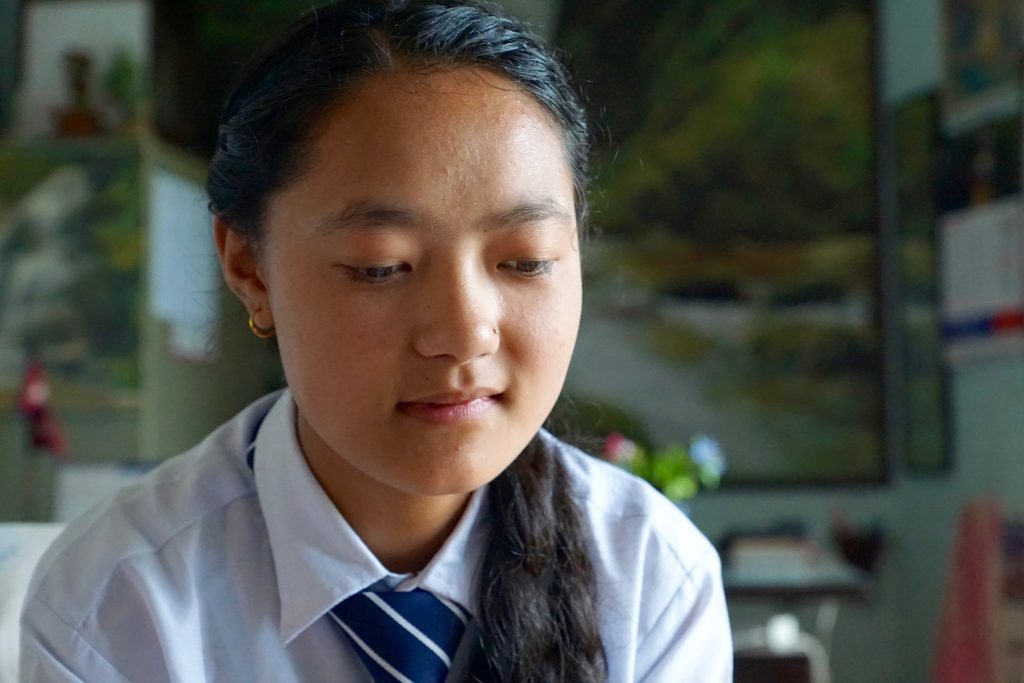 It is the fourth year Manju is supported by CONCERN and she is very much aware of the importance of education. (Bhaktapur/LC)

Manju is 16. Most of the time she is lowering the gaze, when someone is speaking to her. She answers questions very evasively, but always with the shadow of a smile appearing on her face. She feels quite uncomfortable. We joke, speak about our experiences with school and try to make her feel safe and relaxed. It is difficult. She tells us that she likes going to school and that she helps her mom in her shop after school when she has free time. She tells us that she never worked in a brick factory.

Buddha Mala, her mother, is more direct and makes no secret about her daughter’s past work in the kilns. She has tears in the eyes when she mentions her and her children’s life in the brick factory. We make her understand that we are not judging her, but that we ask these questions only to help her, because the monitoring and evaluating of the 50 Children Program in talking to all families supported by CONCERN and AP, is necessary for the project’s improvement. Her statement is very important to us. Even more, when I realise that her daughter did not tell us the truth. I guess she tried to protect her mother, fearing we could blame or scold her because she took her kids with her to the kilns from a very young age. These human and understandable bias distort any evaluating, that’s why crossing interviews around one person or issue is crucial. 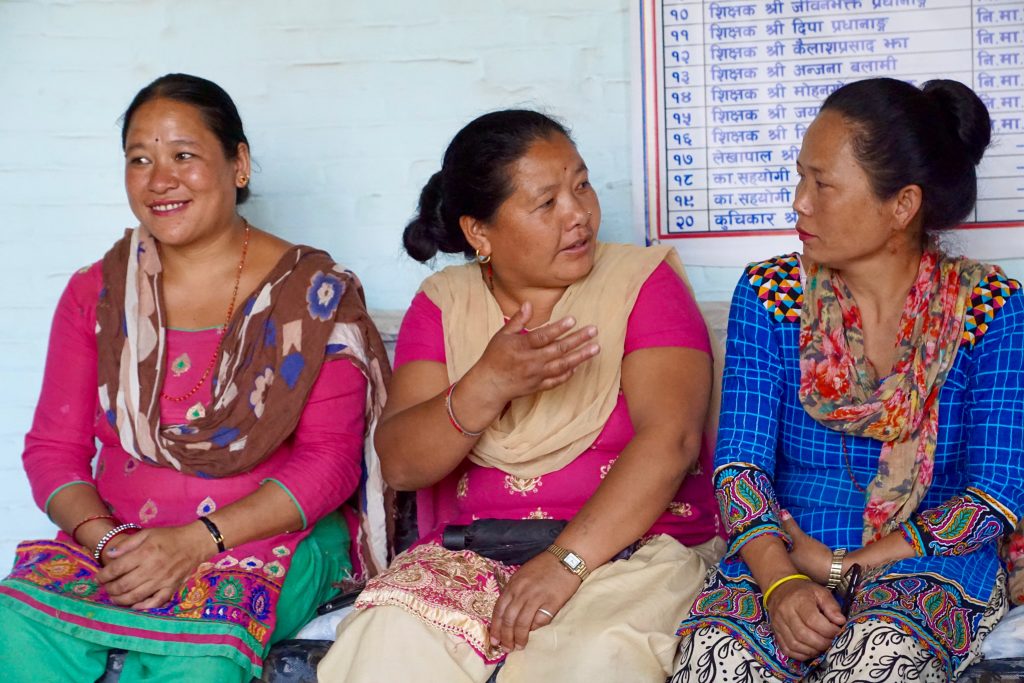 Buddha Mala (middle) is supported by CONCERN and AP since 2015. It enabled her to send her daughter to school instead of taking her to the kilns, where Manju used to work until the age of 12. (Bhaktapur/LC)

Will you continue to support Manju’s school fees even if she is 16 now?

Her very pertinent question stumped me.

Until when are you a considered as being a vulnerable child that needs to be rescued from child labour? Until when should a child, that was rescued from the work in brick factories and given access to education, be supported in order to avoid him going back to the kilns – because without diploma it is almost his only opportunity?

It opens an even broader question, not only about free access to basic education, but also making access to high school easier, to allow a child to go through its entire schooling in the best condition, while making sure he obtains a diploma once it is accomplished. 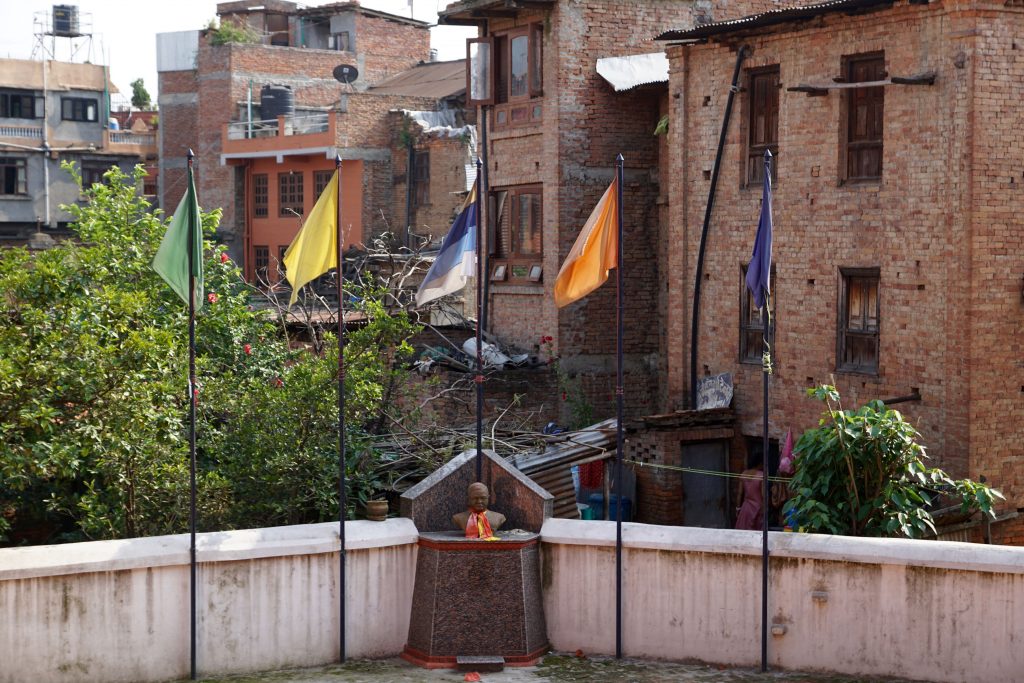 Saraswati school in Bhaktapur is one of seven schools supported by CONCERN in 2018. (Bhaktapur/LC)

From a South-African perspective

During my research on sponsored education around the world, I came across one interesting example on how the government takes actively part in reducing school fees for basic education. South-Africa’s Schools Act of 1996 introduced the opportunity for poor families to be exempted from paying school fees. The act has been enriched in 2007 with the no-fees school concept that aimed to abolish school fees in the 40% poorest schools according to a national ranking system including schools from grade 5 to 9.

The education sponsorship system as it has been experienced in South-African schools has great potential. Despite the help the School Act provides to schools and families with a poor background, this school fee exemption initiative also shows its own limitations though. A case study published in 2010 by USAID shows that while this system is relieving many parents regarding the school fees, its benefits are unequal over the country. The rules are especially affecting negatively poor schools of some areas with main obstacles, such as principals that do not necessarily inform parents about the exemption application process, because provincial governments do not necessarily investigate on how and if schools respect their budget, because headmasters of poor schools are often overwhelmed by the complexity of the new kind of school budget they have to produce.

Other articles also point out the lack of additional governmental compensations for schools that have a high exemption level, compared to the support no-fee school receives, while the first ones being in poor areas, definitely need more attention. 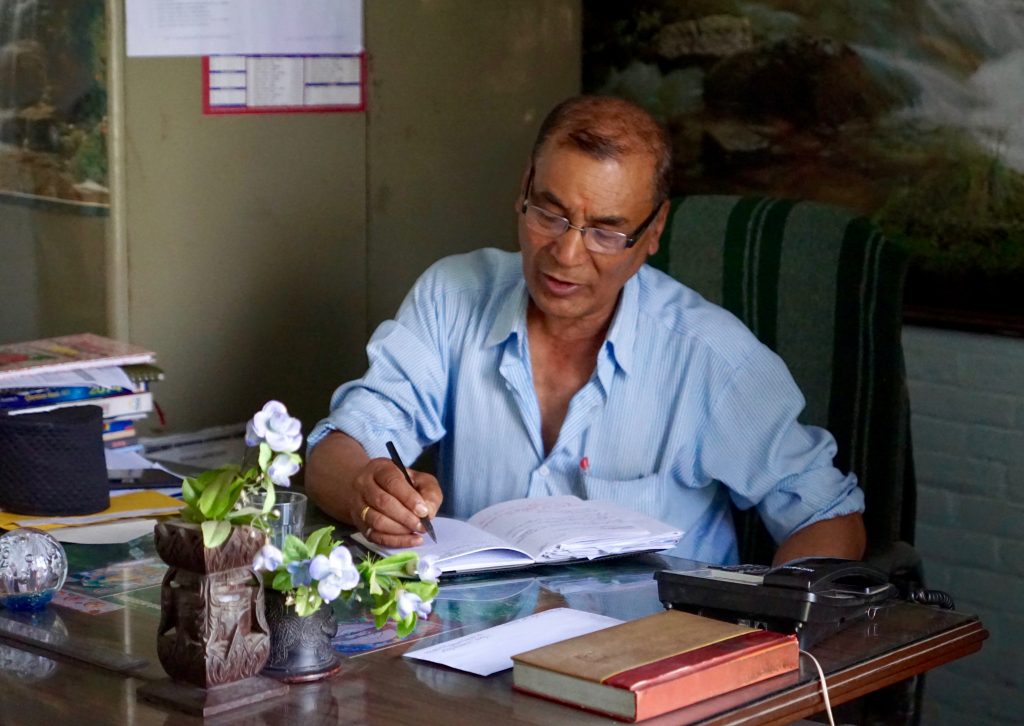 If I write extensively about school fee exemption and no school fee policies, it is because I raised the question of the benefits of free access for ALL children to basic education in my last blog “The Challenge of Prioritizing”. However, the South-African example would not solve Manju’s issue. Older learners are clearly not a priority for the government that only supports children from Grade R (the beginning of basic education around 5 years of age) to Grade 9 (before beginning higher secondary school, around 14 years of age). For those from Grade 10 to 12 the total amount of school fees will have to be paid no matter their financial background. A national survey from 2005 shows that children’s attendance rates are very high (around 98%) for those between 8 and 14, but that from age 15 their attendance rate considerably decreases(around 85%). The trends clearly show that dropouts are linked to lacking support of older learners, even though it is understandable that the state prioritize the access to basic education.

But what about all the Manjus of Nepal?

Manju is supported jointly by CONCERN and AP since 2015 and studied from then up to 2018 in Dattatraya school, along with her classmates Muskan and Roji, before being transferred to Saraswati higher secondary school. She loves going to school because of its atmosphere and is doing well, especially in Nepali her favourite subject. Sometimes she has to miss school when her parents are going to their village in Ramechhap. Both her parents worked in brick factories for years and took their children with them because they needed more money to eat. Manju worked and lived in the factory until the age of 10 and was shifting bricks everyday. Now, her father is a construction labourer and her mom has a little shop where Manju is helping after school when she has free time. Her parents want her to be hard-working since they did not have that opportunity themselves. She told us being happy because her parents allow her to read and write, and her awareness about the condition of her parents and their support for her education is touching. 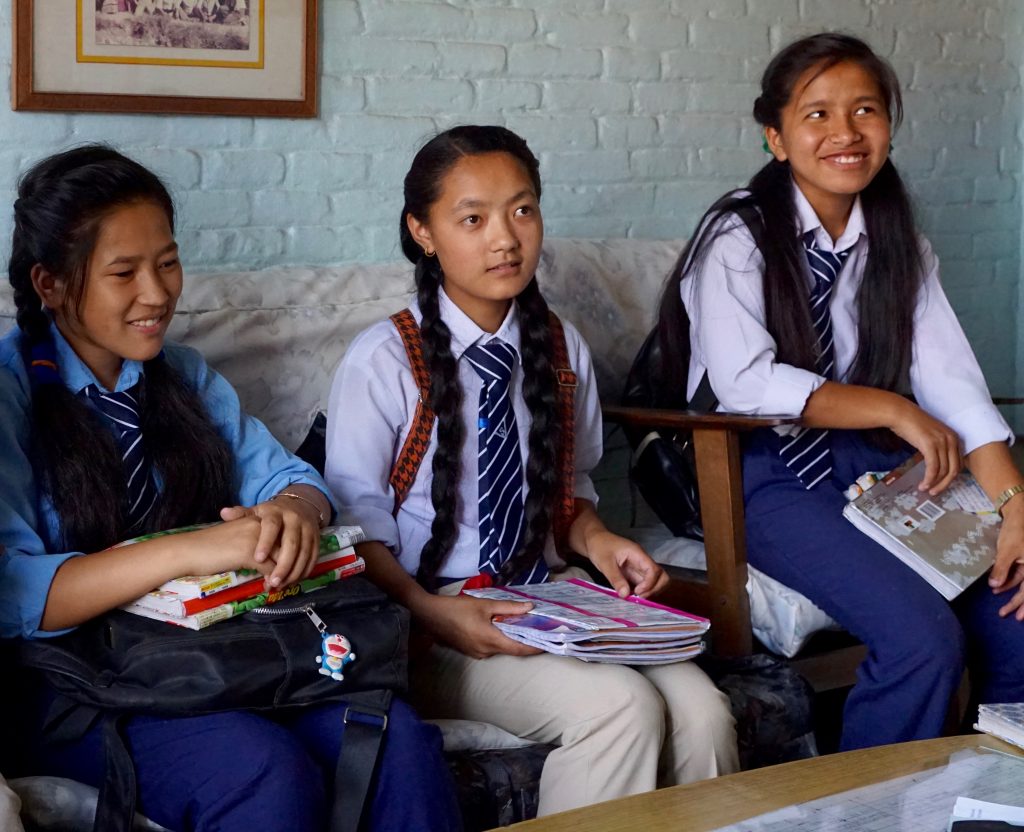 Muskan, Manju and Roji listening to the headmaster. (Bhaktapur/LC)

Like in so many countries, Nepal’s youth faces the problem of unemployment if their college level is “only” corresponding to that of a bachelor’s degree. For young graduates from high school, the job hunt is even more difficult and leads to considerable headache about accepting jobs that are underpaid regarding their qualifications, or doing a job that is well paid – mostly in the banking sector – but that does not correspond to their aspirations at all. Young people that dropped out at 16 do not even have the choice to work in the banking sector or somewhere else, they are mostly condemned to work for jobs where no diploma is requested. Most of the time they need to go back to rough labour jobs such as working in construction work, agriculture or brick kilns. 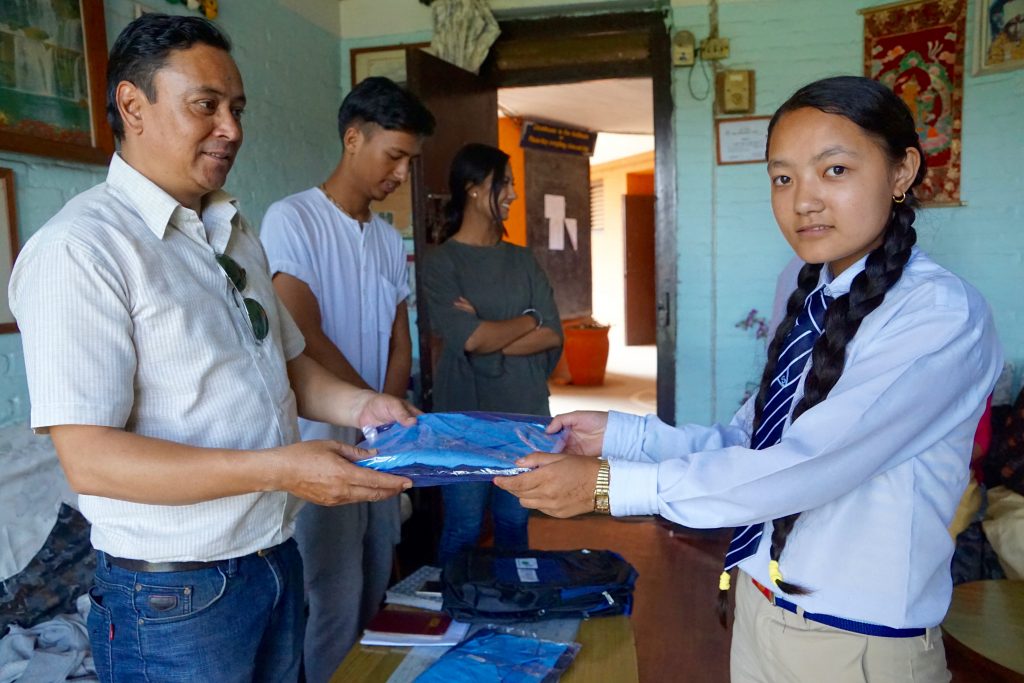 Manju is receiving her new uniform from CONCERN. Now she has two school dresses that will last for one whole year. (Bhaktapur/LC)

For this reason, it is of high necessity for CONCERN to support children even if these are not considered as being vulnerable children anymore. It seems difficult to me to see any sustainability in the support given to these families, if their child is not supported for the crucial final years leading to the diploma. This problem is not unique to Nepal but to every country where children with disadvantaged backgrounds are most of the time falling behind governmental education policies. Breaking the circle of child labour needs a long-term support that ensures a child of being skilled enough to live in better conditions to help enable its own future children to go to school, and in advocating for a child labour free society.

I did not know what to say to her mom when she asked me if we could continue to support her even if Manju is 16 now. I would have said yes. Unfortunately, I am not the one deciding on this. 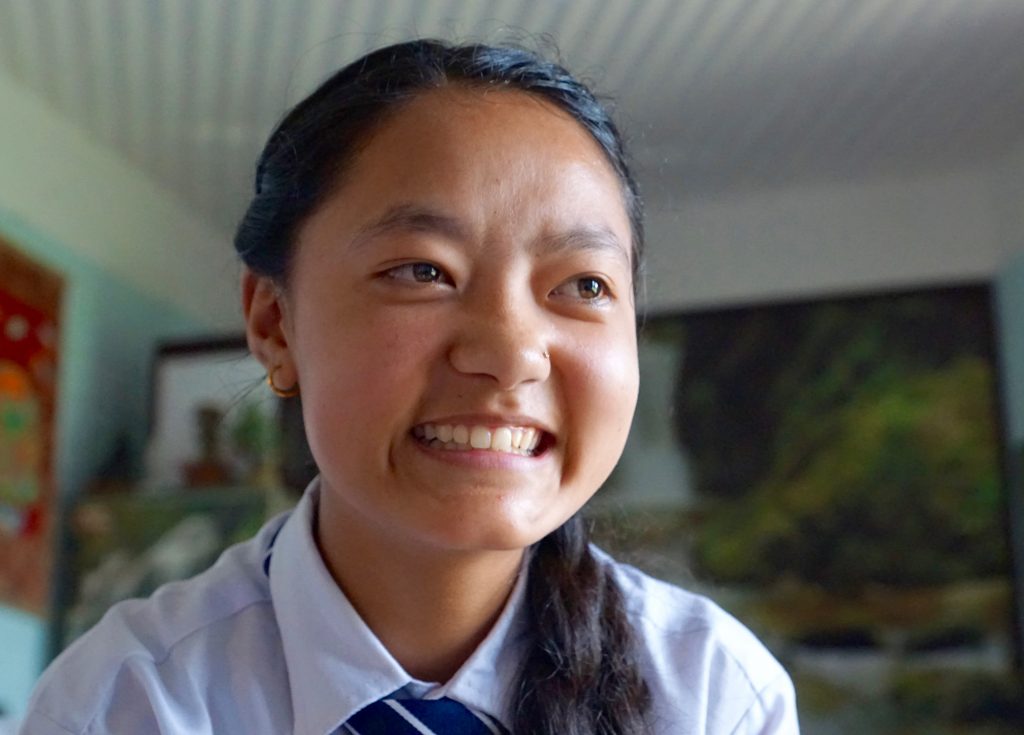 This smile is worth all education fees in the world. (Bhaktapur/LC)