I believe storytelling is about listening and observing. It may sound counterintuitive, but the most poignant and impactful stories I read or view are those that capture many layers of the protagonist. They are those that capture nuance and local context while simultaneously capturing the essence of our shared humanity. They are those stories where I don’t know the author or the person behind the camera, but I know they approached their role as a storyteller with respect, humility, and an unparalleled ability to listen and observe.

As a 2018 Peace Fellow in Kathmandu and Bardiya, Nepal, I am working with a community based organization called NEFAD, the National Network of the Families of the Disappeared and Missing, to support their work advocating for Nepal’s families of the disappeared and missing and providing livelihood support to women in the district of Bardiya who lost loved ones in the armed conflict.

Over 1,300 Nepali people were forcibly disappeared during the armed conflict in Nepal between 1996 and 2006. 224 of those disappearances were in Bardiya, the highest number in a single village. Their family members continue to seek justice and the truth about what happened to their loved ones. For many families, the loss of their family breadwinner had negative economic consequences. NEFAD established an embroidery cooperative comprised of 25 women in Bardiya. Through NEFAD’s embroidery training, the women have crafted quilt squares memorializing their stories and are working to establish their cooperative as a reliable livelihood source. 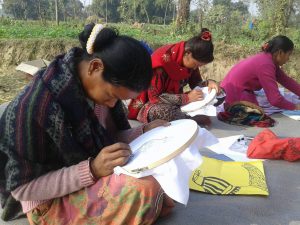 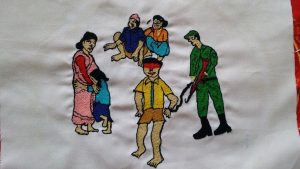 Memorial square depicting a man being taken from his family

A major component of my work involves telling the women’s stories through blogs, photos, and videos for advocacy purposes. One of my favorite definitions of the word advocacy is the following. Advocacy is the process of supporting and enabling people to express their views and concerns, access information and services, defend and promote their rights and responsibilities, and explore choices and options.

I like this definition because it captures what I value about advocacy work; that is, advocacy is the process of listening, observing, and amplifying the voices of people with great strength who may not have had an opportunity to tell their story. Responsible advocacy is an important part of the process of achieving positive social change and defending human rights as it sheds light on issues and challenges society may be unaware of or have forgotten about. With all of its potential comes great responsibility.

As with all advocacy efforts, there are many ethical and practical challenges, which I’ve briefly described below:

Ensuring the women’s safety: Politically charged issues including armed conflict and transitional justice may be sensitive issues. As a storyteller, my first priority is to do all I can to minimize the risk that they could experience negative consequences for sharing their story.

Women with agency: The women in Bardiya are more than the trauma they have experienced or any of the bad things that have happened to them. They are the protagonists in their stories, and I aim to portray them as women with identity, agency, and strength.

Power dynamics and privilege: As an American graduate student, I carry with me certain kinds of privilege. Perhaps some women do not want to relive their stories again. Perhaps some women feel they must relay their story in a certain way given my presence as an outsider, an American, or because of any other part of my identity. As Roxane Gay says, “You need to understand the extent of your privilege, the consequences of your privilege, and remain aware that people who are different from you move through and experience the world in ways you might never know anything about.”

Translation: Most of the women I will meet in Bardiya speak Tharu. Sarita and Prabal of NEFAD will translate, but it’s so easy for words to get lost in translation. Prior to traveling to Bardiya, I will work with Prabal to ensure that everything I intend to ask is translated into the appropriate local context or adjusted as necessary.

Regardless of the ethical or practical challenge of advocacy and development work, I hope that by listening and observing diligently and by approaching the work with humility, respect, and thoughtfulness, I can tell their stories with great care.