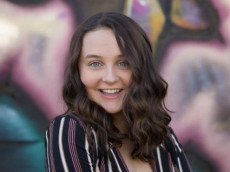 Abby recently graduated from Denver School of the Arts in Denver, Colorado. This past year she served as an International Thespian Officer, where she represented more than 100,000 theatre students across the world. In this position she traveled across the nation to teach leadership and arts advocacy workshops to students, teaching them how they can use their passion for theatre to advocate for change. Abby has spent the last four years lobbying and advocating for arts education and funding, on a local, state, and federal level. Her passion for arts education, enacted her interests for social justice and women's rights. She is currently pursuing a BA in political science at American University with the hopes of joining the PeaceCorp after college.

As a young woman, I have grown up watching politicians and lawmakers chip away at my right to bodily autonomy. The politicization of my health care has made me question whether my government serves to violate my body or protect it.

The Pro-Life vs. Pro-Choice debate is a war that has been waging for too long. Roe v. Wade was a huge stride in women’s rights and is a symbol of the liberation of women’s bodies. Since it’s ruling in 1973, the evangelistic Pro-Life movement has been making enormous progress in the political arena to strip women of their right to choose. Their direct manipulation of Republican politicians has created legal restrictions limiting access to abortions.

Targeted Regulations on Abortion Providers (TRAP) are legal laws that are endangering women’s right to an abortion. Twenty-three states have legal regulations on abortion clinics. Planned Parenthood states that “Targeted restrictions on abortion providers (TRAP) laws are costly, severe, and medically unnecessary requirements imposed on abortion providers and women’s health centers.” These laws are a direct reflection of Republican lawmakers weaponizing their personal beliefs to infringe the limit women’s power over their bodies to gain political support.

What is the effect of TRAP laws? Well, they created “abortion deserts,”  a term used to describe cities that are more than 100 miles away from the nearest abortion clinic. Twenty-seven major cities in the United States qualify as an “abortion desert” and there even six states that only have one abortion clinic in the entire state all of this due to the constraints of TRAP laws.

For a woman without a car or working a 40 plus hour week cannot afford to travel 100 miles for an abortion this is an extreme time and financial constraint. This creates a socio-economic gap that favors women of higher income while women with a lower income can’t afford access to abortion. This increases unwanted pregnancies in low-income communities which only perpetuates the cycle of poverty.

Unfortunately, this is not the end, it is only the beginning. Due to the recent devastating loss of Supreme Court Justice, Ruth Bader Ginsburg and her conservative replacement Amy Coney Barrett could rechallenge Roe vs Wade, forcing women’s rights to a climatic cliff.

Growing up I treasured Ruth Bader Ginsburg for fighting for the equality of women in the workforce and in the homes, along with protecting a woman’s right to choose. Her efforts to fight for women’s bodily autonomy are threatened by the enforcement of new TRAP laws and the appointment of Amy Coney Barrett. The politicization of abortion is a health risk. Politicians are creating and enforcing TRAP laws in their states without having any sort of medical experience. Proving, the TRAP laws are not created to protect or help women but to limit access to abortions because of their own personal beliefs. In totality, The debate is not about health and protecting the lives of women, it is simply a facade that politicians and lawmakers use to gain more power.