Gail Morgado is an Advocacy Project Peace Fellow working this summer with the Women in Black Network from Serbia, an AP partner organization in Belgrade, Serbia. She has recently finished her first year in the MSFS program at Georgetown University where she is concentrating in foreign policy and international security. In 2004, Gail received her BA in political science and Spanish with a minor in Portuguese at Rutgers University in New Brunswick, NJ. She was awarded highest honors in political science for work as a Henry Rutgers Thesis Scholar researching Cuban-American relations and its influence in a transitional post-Castro regime. Selected as a Rotary Ambassadorial Scholar to Portugal, Gail served as an "ambassador of goodwill" from 2004-05 and earned a post-graduate diploma in European studies that specialized in the political economics of Euro integration and community law of the European Union. Here, she also organized fundraisers and community activities, which helped to raise AIDS awareness and to increase national literacy and educational standards in Portugal. Gail is working with Women in Black, a women`s feminist - anti-militarist peace organization that has been advocating against militarism, nationalism, war, sexism, and all forms of hatred, discrimination and violence since 1991. Gail will be working with this courageous group of women to further their mission of peace and justice in a post-conflict society.

This was one of the most intense moments of my life. I visited the Srebrenica Memorial with members from Women in Black on 12th anniversary of the massacre where 8,000 Muslim boys and men were killed by Serbian forces in a crime that the Hague has called “genocide.”

No Serbian officials were present; We were the only Serbians to visit Potocari on this day. “Visiting the places of crime committed in our name” is one of the most important activities that Women in Black is committed to.

Women in Black came to express their sympathies to the survivors of the Srebenica massacre.
Stasa Zajevic, president of the association, said she and other members came to Srebrenica to “apologise to the relatives of the victims for the crime that was committed on our behalf”.

“We admit that genocide in Srebrenica was a crime organised on a state level and that the country we are coming from was involved in it. We want the perpetrators of this crime to be punished,” said Zajevic.

For more photos on Women in Black in Srebenica, visit my flicker account: 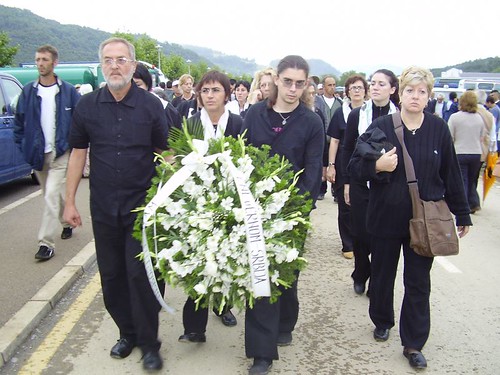