Investing in Our Future

There are many times in the field of conflict resolution where I find it difficult to maintain hope in the concept of peace, mainly because the primary ideologies governing international relations are not aligned with my personal beliefs.

Especially, the more that I learn about world history, the more I wonder to myself if I am too greatly outnumbered. If I am outnumbered, what difference am I making when the majority of the world will simply continue to struggle for power?

Then I remember the story of the child throwing starfish back into the ocean… Making a difference in one life may not change the entire world but it still makes a difference to that one.

From my perspective, the roles are reversed; I am walking along the beach and children represent the most precious starfish. Children are innocent, impressionable, and completely vulnerable to their environments. That being said, they are also incredibly resilient and determine the future of our world.

I remember my first time coming to Africa, with an inspirational woman named Catherine Keck and her organization Project Restore. We worked in a school in a small rural village in Uganda. I was absolutely in awe of the children, many of whom were orphaned by HIV/AIDS, of their smiles, their curiosity, and their stories. It was in Namulonge that I met Anna (whose name has been changed to respect her privacy) and it was there that I was smacked in the face with the reality of what some children experience as a result of the life they are born into. Anna was a total orphan, which in this case means that both of her parents died as a result of AIDS. She had 8 brothers and sisters and they were all being cared for by their elderly grandmother.

Let’s stop and think about that for a second- about the situation that Anna was in and about her grandmother. Not only did Anna’s grandmother lose either her son or daughter, but now she also has inherited the sole responsibility of nine children who not only have just been devastated by the loss of both parents but could very well be at risk of HIV themselves. I remember holding her as she cried and told me her story. This was not my first encounter with the unfairness of life, but it was my first time feeling so compelled to do something and yet utterly helpless at the same time… and at the end of the day the only thing that Anna wanted was to be loved.

I think about Anna nearly every day, and the countless number of children like her throughout the world. She left an impression on me that remains, and all I can hope is that in some way I helped her see her worth, and made her feel cared about.

Now I have returned to Africa, this time once again to Kenya, and I have been met with equally inspiring people. Spending this first week with the directors of Children’s Peace Initiative (CPI), Hilary, Monica, Jane, and Caroline, I have been able to see that not only do they attempt to spread peace throughout Kenya, they live and breath it every day and consider children at the forefront of their priorities.

One example of this can be seen in Elias, a boy that Monica adopted 3 years ago during a visit to oversee one of CPI’s projects. Initially when they met his eyes were extremely swollen and almost closed, and it was agreed upon that from then on Monica would have legal guardianship over him.

Once a tiny boy who can barely open his eyes has developed into a brilliant, friendly, thoughtful, loving 8-year old. He has an amazing bond with Monica, as well as her sister Jane and cousin Purity, and they have formed a small family, albeit one that is not quite traditional (which makes them all the more endearing). When I arrived Monica told me about Elias, and also that he was very excited to meet me. We became immediate friends, playing football and doing homework together. Still, it was slightly surprising on the third night when Elias told Monica he wanted to sleep in my room.  Monica said “Wow, you two have really bonded!” I felt truly touched that this little child trusted me so much, someone he had virtually just met.

So I tucked him in under the net and thought about the gravity of the impact having that trust betrayed would have on a child.

Elias’ story has a happier ending than some, he maintains contact with his mother and siblings, has even returned to visit them and acknowledges them as his family and first home, but is flourishing in his second home in Nairobi. Some children are outright abandoned and abused, sometimes for years (or the entirety) of their young lives.

Can you imagine? Imagine being so young and dependent, and being let down by the people who are supposed to raise you, in whatever way that may be. Perhaps you have experienced that.. perhaps you have experienced much worse. In the life of a child, breaking trust and a bond that early could be extremely detrimental. I’m not a psychologist, but one can imagine the potentially life-altering impact. Yet, in the case of Anna and Elias, there is still so much room for love. Despite the fact that they, as all children basically are, completely at the mercy of the decisions made by the adults in their life, they have the courage and resiliency to want to trust and love again.

We heal, and we move on. 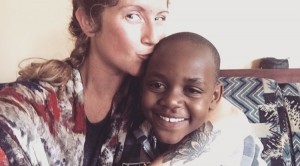 Maybe I’ve had this wrong all along… maybe I’m the starfish. Every time I get washed on shore, searching for purpose, along comes a child reminding me where to find hope in this life and why I chose this path. 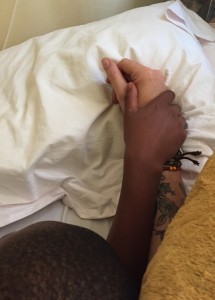 This post comes in conjunction with the opening of a Global Giving page for CPI and a very exciting MATCH DAY tomorrow, Wednesday, June 15. I was very lucky to find CPI as an organization that truly values children, and I feel very strongly that the approach they are using is making a distinct difference in the lives of the children, families, and communities in the areas in which they work. Children are underestimated in the peace process, and, as Hilary has said, “should be given an active role in peacebuilding”- this at the most basic level is empowering them to take control of their own destiny, one that is much closer to being “conflict-free”.

The children that CPI helps all have stories and many are similar to those of Anna and Elias; kids with huge hearts and so much potential that is hard to reach depending on the hand you are dealt. If you feel so inclined, please visit the links below to check out the CPI website and make a donation. Any donations are greatly appreciated, but making a contribution on June 15 will be especially beneficial as any donations are matched at 50%!

**edit, the original Global Giving link was incorrect, this one has been changed and should work perfectly.