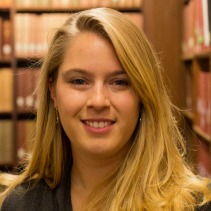 Allyson is a graduate student at the Fletcher School of Law and Diplomacy at Tufts University, where she is pursuing a master's in Human Security and Gender in the Middle East. Prior to Fletcher, Allyson spent two years in Tunisia teaching English with AMIDEAST, learning Arabic at the Bourguiba Institute for Modern Languages, and travelling. She also worked for Layalina Productions, Inc., a DC based nonprofit that produces award winning films and television series that aim to bridge the divide between the Arab world and the United States. At Layalina, Allyson served as Coordinating Producer and Production Supervisor for "Yemeniettes," a documentary that follows a team of teenage girls as they strive to break barriers of traditional Yemeni society through entrepreneurship. She is incredibly excited to return to Jordan, where she first studied abroad in 2010, and learn more about the issues facing Iraqi and Syrian refugees in Amman through working with the Collateral Repair Project. Allyson is originally from New Hampshire, and holds a BA in Government from Smith College in 2011. After her fellowship, Allyson wrote: "The training I received from AP ensured that I would be able to contribute to my host's efforts in a meaningful way. Knowing that I was able to build capacity and contribute to sustainable programs made my fellowship experience not only useful for my host, but rewarding for me."


Hope and Hospitality in Amman 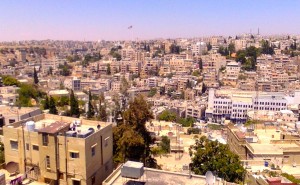 Jordan is a place that has always welcomed me with open arms. Whenever I’m in Amman, I find myself knocked off my feet with hospitality. Between heaping bowls of my host mother’s food, vibrant and encouraging conversations with my taxi drivers, and the countless people I’ve encountered who have helped me wend my way through this city, I’m constantly amazed at the kindness and generosity of everyone I meet here.

It is no wonder that a place so selfless and welcoming has served as a haven for many different groups fleeing persecution throughout history. Jordan has been welcoming refugees for almost 200 years; Muslim Circassians, Armenians, and Palestinians, among others.[1] Currently, many Syrians fleeing the violence of the Syrian conflict are crossing Jordan’s northern border, where they are received at the Za’atari refugee camp. Since the opening of Za’atari in 2012, it has vastly expanded and it is considered to be Jordan’s fourth largest city. Za’atari’s growing size, as well as ongoing demonstrations over insufficient food and accommodation, make it the nexus upon which the refugee conversation in Jordan rests. With so much attention directed at Za’atari, the plight of urban refugees is considerably less visible.

The reality is that an estimated 82% of Jordan’s refugees reside in urban areas,[2] their plight often obscured by attention given to camps. This is where organizations like the Collateral Repair Project step in. Originally founded in 2006 and focused on aiding Iraqi refugees in Amman, CRP has expanded over the years and now serves Palestinians, Iraqis, Syrians, and Jordanians alike in Amman through their community center programs and emergency assistance.

Wrapping up my first week at CRP, I’m most struck by the diversity of CRP’s staff, the community they serve, and the deep connection between them. Abu Ahmed, one of CRP’s Program Directors, is from Damascus and works alongside Jordanian and Iraqi staff at CRP to serve the community. In fact, many of CRP’s beneficiaries go on to become volunteers at CRP, and the connections between the organization and the community are evident.

On my second day, during a meeting with Amanda, the Executive Director of CRP, she mentioned to me that Saddam, one of CRP’s Program Directors, had noticed a man on the street begging whom he had not seen before. Saddam engaged with the man, and ultimately visited his home to hear his story. The man and his wife had fled Iraq along with their young daughter due to sectarian threats. With no current source of income, they were behind on their rent and struggling to put food on the table. Amanda informed me that they would be adding the man and his family to CRP’s monthly food voucher program as a result of the visit. To me, this example highlights just how tapped into this community CRP is; they know the people in this neighborhood and through their programming, have really helped foster a strong sense of community through their connectedness and willingness to engage with members of the urban refugee population who might otherwise fall through the cracks. 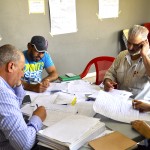 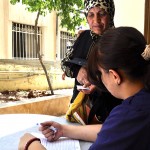 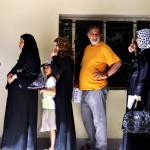 It’s been an eye-opening first week. Even though things slow down at CRP (well, everywhere in Jordan, really) during Ramadan, staff was busy running food package and voucher distributions. This week CRP distributed 50 food packages, which will feed 112 adults and 113 children in their community. They also distributed food vouchers that went to 128 homes that will help feed an additional 285 adults and 360 children this month. 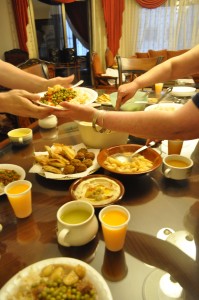 Iftar dinner with the host family

As my host mother stuffed me with platefuls of home cooked Jordanian food every night for Iftar, thoughts of the food distributions were at the forefront of my mind. Ramadan is a time to reflect, to fast and be reminded of the luxuries you might have that others do not, and to share in the joy of family. These sentiments echo through CRP’s work year round, and I’m looking forward to learning more this week about how Jordanians, Palestinians, Iraqis, and Syrians are coming together in the CRP space to keep spirits high and the community engaged and active despite the challenges faced by urban refugees here.

CRP’s website for more information about their programming and emergency assistance programs,

Elena Habersky’s (former Programs and Administrative Manager at CRP) excellent piece for MUFTAH which provided many insights about the urban refugee population in Amman,

And my Flickr feed to see more photos of this week’s distributions!

With love from Amman,