After a seven-hour bus ride and two-hours on a ferry, Saidul Huq and I finally got to Barisal. I have a lot to say about that particular bus ride, but I think I’ll spare you the distress. Most importantly, my travel partner and I arrived at our destination still (miraculously) in one piece. 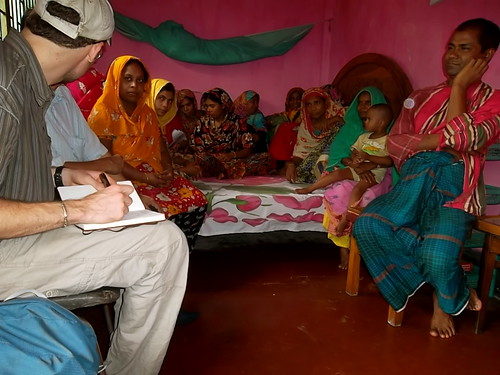 Meeting with the Micro-credit group in Barisal

For those of you unfamiliar with BERDO, Saidul is the founder and Executive Director. He is also blind and has been since he was six. In my first weeks here he was my guide. I’ll never forget having Saidul give me a tour of city: we were riding in a rickshaw and he was pointing out all of the landmarks – “stadium on your left now…this is the government building on our right”, and so on. It was impressive to say the least.

Saidul and I were taking this trip so I could get acquainted with BERDO’s micro-credit program, which operates in three different locations including Barisal. During our short stay there I met with two local woman’s groups who receive Micro-loans: one strictly made up of women and the other (as far as I could tell) consisting of all women but without claiming the title.

It was an amazing and totally different experience than Dhaka. The first thing I noticed about Barisal, to my relief, was the improved air quality and the reduced noise. The second thing I noticed was the generosity of its people. Their level of generosity is humbling. On countless occasions I have been invited in to strangers’ homes and fed a meal. Not to mention the numerous cups of tea.

The groups we met with in Barisal were formed around the programming that BERDO provides. If you get a loan, you definitely want to be part of one of these group. Outside of being a great resource economically, they provide a social environment that would be hard to come by if not for the structure of the programming. 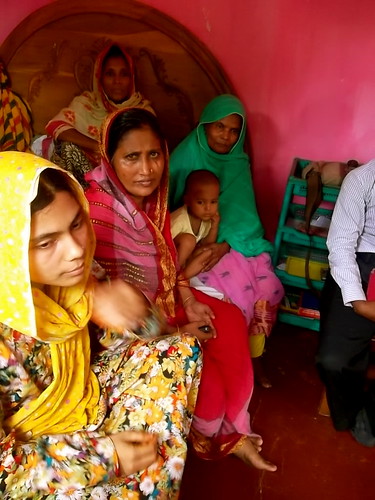 Tania on the Left

Saidul translated for me as I asked Woman about their lives and their loans in particular.

Tania had taken out a loan for 8,000 TK (100 dollars). She keeps her finances separate from her husband’s and has learned how to use a shoe-making machine. She volunteered her time making shoes with another woman in the community, so she could learn the trade. When the time came, she bought her own machine and went into business. She said this was only possible because of the loan she received from BERDO. Saving in Bangladesh is not easy when you make a dollar a day (if you’re lucky). Before her loan, Tania wasn’t making any money and was supported on the $3 dollars a day her husband makes as an interior painter. They also have a child. Now she is making 700 TK a week (8 dollars) and is repaying to loan on time. It might not sound like much, but when you consider what it will mean for her when the loan is paid off, it’s a pretty incredible thing.

I’m headed back this week on a 12-hour ferry ride from Dhaka to Barisal. I’ll be staying in Barisal for a number of weeks looking into developing more micro-credit options and developing a proposal for donors.