Ms. Duong Thi An’s family is the Agent Orange Campaign’s sixth beneficiary. Ms. An lives in the Le Thuy district with Le Quoc Huong and Le Thi Hoa, her youngest son and daughter, respectively. Huong and Hoa have both been affected by Ms. An and her late husband’s Agent Orange exposure. Huong (39 years old) has severely impaired vision and had his right eye removed at the age of nine and Hoa (36 years old) has Down Syndrome. 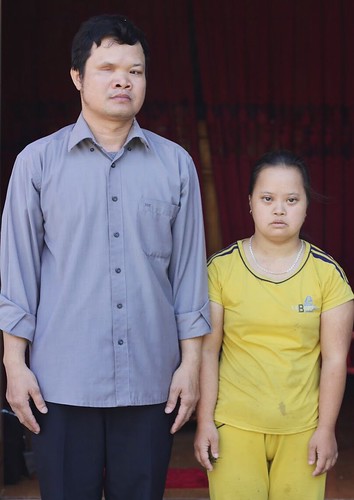 Le Quoc Huong (39 years old) and Le Thi Hoa (36 years old) meet with us during our visit to their home. Unfortunately, Ms. Duong Thi An was ill and in the hospital. Huong has been in charge of managing the household with help from his brother’s family while Ms. An is away.

We visited Ms. An’s family earlier this month and spoke with Huong. Ms. An is in the hospital in Dong Hoi tending to serious problems with her gallbladder and elevated liver enzymes. Huong explained that no one realized Ms. An was sick, so she kept working in the fields and taking care of her children. He recalls that she worked so hard that her skin became yellow and eventually she could not eat anymore. Huong quietly and woefully mutters that they were all so focused on work, not health.

Ms. An spent 1 month and 10 days in Hue hospital and then was relocated to the provincial Dong Hoi hospital during the week of September 6. The move was the result of policies and procedures that require documentation to maintain her in a bigger city hospital. From Huong’s description, it seems she was unable to get the approval necessary to stay in Hue. She will return home when she is better although they are all unsure of when that will be.

Ms. An has health insurance but it does not cover all the costs of her treatment. The family had to sell the buffalo calf to pay for her treatment in Hue. It helped cover the medical costs no money from the sale remains. On a positive note, Huong is happy to report that the buffalo has just conceived earlier this month and will bear a calf in approximately 10 months. They are maintaining their buffalo-rearing endeavor in the best way they can but are experiencing competing needs that surpass the income generated by it.

Her eldest son, Le Quoc Hai, does not suffer from the effects of Agent Orange and is responsible for supporting the family in Ms. An’s temporary absence. Hai spends time with Ms. An in the hospital, uses the buffalo to farm sweet potatoes and vegetables, and raises pigs, ducks, and geese. Huong mentions that they depend on his Hai’s family. 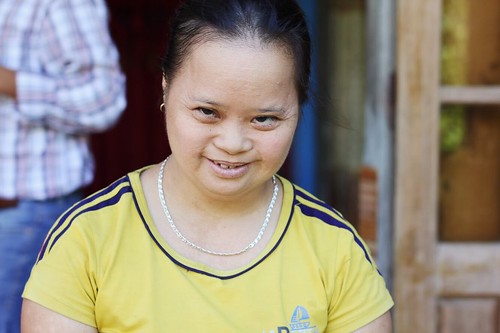 Hoa smiles for the camera before flashing a peace sign with her fingers.

While Hai has taken up the farming and field work duties, his wife has filled in for Ms. An inside the household. Ms. An taught Hoa how to do household chores but she often depends on someone to assist or task her which Hai’s wife is able to do. Beyond these interim household duties, she also goes to Ha Dinh province to purchase medicine for Huong and Hoa every month.

Huong provides for his household through his massage parlor. He tells us that things are going well; there are slow days and days with a handful of customers. Huong would like an assistant but isn’t quite ready to hire anyone. Unfortunately, his vision is worsening. He had plans to have a consultation in Hanoi (prior to Ms. An’s treatment) but has since postponed it because there isn’t enough money. Huong will need more surgeries to save his only eye but in the meantime he can only rely on local medication. 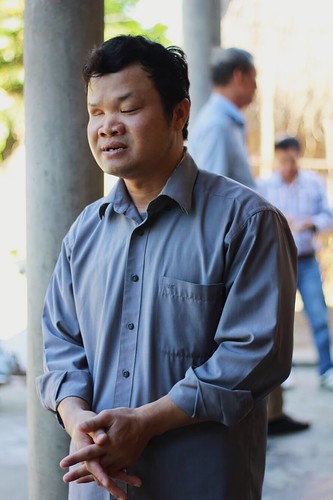 Huong shares a few final thoughts with us before heading back to work. He has a busy day ahead of him.

Huong did not dwell on the latter for very long he had “work to do–especially now”. We said goodbye to Hoa and Hai’s children (that had been sitting nearby) and Huong hopped in the car. We dropped him off at his massage parlor but not before he gifted us a grapefruit from their garden.

I left the visit feeling saddened by Ms. An’s health condition but inspired by her family’s strength, union, and compassion. The Campaign will continue to support Ms. An’s and Huong’s business plans with regular check-ins by the Outreach Workers and overall guidance.