Ms. Duong Thi Hue’s family is the Agent Orange Campaign’s seventh beneficiary! Her family received a cow and calf in 2017.

I’d like to preface this post by saying this visit was the most emotionally challenging for me. Ms.Hue is comfortable and has consented to sharing her story and life updates, but even so I’ve hesitated to write this because it contains sensitive information about her family and their history with gender-based violence (especially as it relates to Agent Orange exposure). 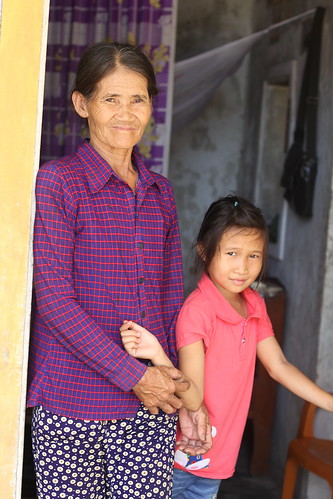 Mr. Vinh (AEPD driver) parked the car outside her gate. We weaved through her front yard, minding the tarps covered in drying grain, toward her home. Quietly, we shuffled into a room with a bed, tables, chairs, and an aquarium with a bamboo plant shooting over the glass walls. The fish in the aquarium are not pets. They are Ms. Hue’s plan B on days the family does not have enough to eat or wants to supplement their meal.

Ms. Hue is strength personified. The wrinkles on her face and her swollen hands concede her life’s challenges. She has had six children, five of which fell victim to dioxin poisoning from the war. An elderly widow, she’s the sole caregiver and provider of three of her Agent Orange-affected children and one grandchild*.

Her daughters, Duong Thanh Binh (29 years old) and Duong Thi Hong Thanh (27 years old), live in padlocked structures behind her home. They developed mental disabilities and began exhibiting violent fits of rage when they turned 14 years old. At which point, Ms. Hue became incredibly scared of her daughters. Left with no recourse to help them and keep everyone safe (including neighbors), Ms. Hue was forced to lock them in separate rooms in 2013. She explains that she gives them medicine with their breakfast in the morning by slipping it into the rice. When they realize there is hidden medicine “they throw the food and break the bowls”.

There is no alternative to this. She would greatly prefer that her daughters live freely but in the times they’ve convinced her to release them, they’ve acted violently–going so far as to pull out a knife and threaten Mr. Thuan (AEPD Outreach Worker).

I struggle with this: I try to walk the fine line of observant learner of cultures and behaviors but sometimes feel the urge to ask unanswerable questions. Is it ethical for her daughters to live contained for the rest of (at least) Ms. Hue’s life? What about their human dignity? Can Ms. Hue’s and her daughters’ suffering be addressed? By whom? How?

There is no question that Ms. Hue deeply loves and cares for her daughters. There is also no question that she wouldn’t do anything to help them. And yet, I’m left confounded and irked at my privilege. A privilege that allows me to sit here and philosophize about her life. The harsh truth is that Ms. Hue does not have any other option. Morally, these questions should still be asked. Practically, they do nothing to help her. 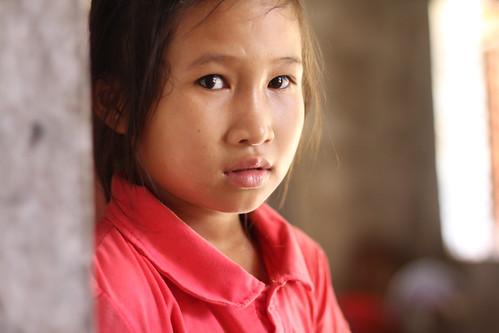 Ms. Hue speaks in hushed tones. Her ten-year-old granddaughter is sitting on the floor below the doorframe playing with an empty plastic chair. She asks her to adjust the fan in the other room before sharing the following:

Binh became pregnant with her when she was 19 years old. Ms. Hue implies that her granddaughter was born from the sexual assault. Her granddaughter attends school and is quite astute. Despite her best efforts, Ms. Hue is unable to raise her. She applied to the SOS orphanage village in the province but was rejected. The village administration is worried that she will begin exhibiting the same behaviors as her mother in a few years and cannot bear the liability and/or safety risk she may become.

Ms. Hue is desperately looking for somewhere safe to send her granddaughter.

A long conversation ensues between Ms. Hue and Mr. Thuan. Her granddaughter returns to sit in the same spot. He promises to support her in finding a suitable and safe place for her granddaughter. Ms. Hue continues to speak in whispers.

Through the door, I see that her son Duong Viet Thanh (24 years old) has returned from feeding the cow and calf in the fields. An uncanny sort of tension stirs in the room. Thanh has recently been released from prison. Ms. Hue fears he has become more violent now than when he was first imprisoned. She suspects that his violent outbursts are the result of Agent Orange exposure and wishes he had been exposed to rehabilitation rather than corrections.

Thanh walks into the home and through the doorframe where Ms. Hue’s granddaughter is sitting. He greets us and asks her to move over, when she does not, he assertively moves the plastic chair out of the way with his foot. Thanh retrieves something from the room and walks to the front yard. We’ve all fallen silent.

Quietly, Ms. Hue explains that her home is not safe for her granddaughter now that he is out of prison. There are moments when he gets very upset and lashes out. Like other caregivers we work with, Ms. Hue understands that these violent outbursts are symptoms of the exposure but that there is nothing that can be done to help him. Mr. Thuan reiterates his pledge to help her granddaughter and respectfully asks why she does not ask him to leave. She explains that she has come to rely on him for help with the cow and calf in the fields. Ultimately, however, Ms. Hue loves her son and wants him with her. She candidly admits, though, that she is worried about what his reaction would be. 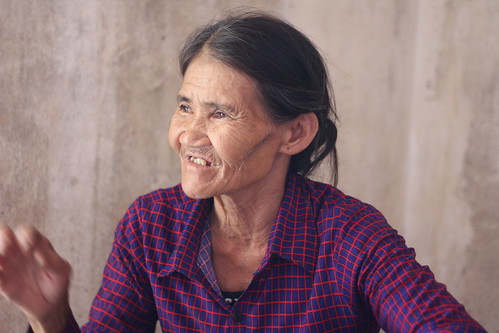 Ms. Hue and Mr. Thuan speak at length. Due to the sensitive nature of the conversation, Ngoc forgoes translating until there are more appropriate pauses in their conversation.

I notice the scab across Ms. Hue’s cheek and ask Ngoc if she is also a victim of his violence. Ngoc was unsure but based on context and the stories she had been telling Mr. Thuan (many of which were lost in translation), said it could be possible. And again, I silently thought to myself: What policies, institutions, support systems are available to Ms. Hue and her granddaughter beyond an orphanage and the Campaign? How will her granddaughter’s mental health be impacted by her current reality? What about Ms. Hue’s mental health? Is there any way to support Thanh and prevent the violence?

Nonetheless, Ms. Hue’s most pressing concern is her children’s wellbeing after she passes away. Of all the other beneficiaries whom we work with to foster sustainable incomes and eventually savings, Ms. Hue is (to me) the most financially savvy. She is the only one that is currently actively saving money for the future and has explicitly mentioned saving now as a priority. The other beneficiaries we work with are still cultivating their sustainable income-generating-mechanisms that will allow them to save in the future (but don’t always quantify when that future is).

She proudly tells us she has saved 45M VND.

She sold the cow in early 2018 for 7M VND and the original calf just had a baby in mid-August. Ms. Hue decided to sell the cow because she was worried about string of cow disease that was plaguing the commune and felt more comfortable caring for a calf. She was also featured on a TV program earlier this year and received 38M VND from supporters. Having a good handle on her income generation and finances, she decided to save 100 percent of the charitable money and income from the cow sales to support her children’s future.

Ms. Hue’s life has been ravaged by the effects of Agent Orange. I sympathize deeply with her plight and admire her resilience.

AEPD is supporting Ms. Hue in looking for an alternative and safe place for her granddaughter and methods to deal with the violence.