After days of horrific reports that thousands of immigrant children are being separated from their families at the U.S.-Mexico border, the welfare, treatment, and development of children have been at the forefront of many people’s minds. These scenes are disturbing and heartbreaking, and I am dismayed and disgusted by the actions of the U.S. President and his policy choices. But I also feel hopeful because of the people I work with here at Children Peace Initiative Kenya, who are so committed to the development of children and helping empower them to become protagonists for peace. So while it has been a dark couple of weeks for children and families, I offer you this blog as a possible beacon of hope; to read about the work of a dedicated individual who has devoted his life to children. With that, I present to you Hilary Halkano Bukuno, the Director and one of the co-founders of Children Peace Initiative Kenya. 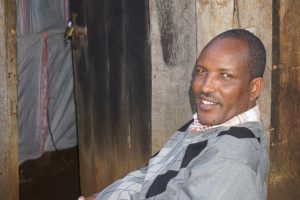 Hilary is a passionate, inspiring man. Everything he does he does with gusto; whether it’s playing the card game “Uno” while we wait for our dinner at the “Pizza Inn”, or speaking about peacebuilding and children being the bridge-builders of their communities, or watching EVERY (no exaggeration) match in the World Cup so far, he is passionate. As a young boy he wanted to become a priest, and his ability to pontificate and inspire makes me believe that he would have been a good one. If John Lennon were still alive I’d bet he and Hilary would be friends, working together to help improve the lives of others. But Hilary found his calling in another direction; peacebuilding.

Hilary was born in 1972 in the small village of North Horr in Marsabit County, Kenya. Marsabit is in Northern Kenya and shares a border with Ethiopia. It’s the largest county in Kenya, yet less than 300,000 people live there due to its harsh desert landscape, perennial droughts, and conflict that has plagued the area for decades. Born into a pastoralist tribe (meaning a tribe that raises livestock and moves with the herds, since the land is not arable) he grew up in conflict, remarking in a matter-of-fact way that “that is a very normal story.” He was sent to boarding school at a young age to escape many of Marsabit’s conflicts, however, his mother had to endure them. “In her lifetime she’s found herself in a raid three or four times. She survived all of them, and is very very lucky to [have] survived.”

These raids that Hilary’s mother survived are what Children Peace Initiative Kenya have stopped from happening in the last 7 years since implementing the Children Peace Building program and Heifers for Peace program with the Pokot and Samburu tribes, Turkana and Gabra tribes, and Rendile and Gabra tribes. I wrote about these two programs in my last blog; if you missed it, go ahead and read it now!

“In the last seven years, there has been zero violence, zero raids, and this is the longest in history these tribes have lived without fighting. Seven years is the longest they’ve stayed without fighting” he says with pride. As he should; some of these tribes have been fighting since the 1850’s, but now that they are at peace the results that CPI Kenya has fostered are incredible. Children are able to stay in school, families are able to build more permanent homes since they don’t fear having to flee, markets are open where the tribes trade and interact with their former enemies, and the cattle herds are growing. In Northern Kenya, where drought and famine are all-too-common, this food security and peace is monumental. 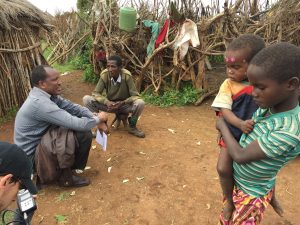 As Hilary speaks, you can tell he has found his calling. As I interviewed him one evening after work, he comfortably lounged his tall frame on a couch while I recorded him and took notes. Speaking about the impact of children is when he comes most alive, his voice getting louder and his speech speeding up. “From the start, things happen automatically with the children. They’re like an army without guns. They transform immediately and start building trust immediately.”

Even when I ask Hilary about the biggest challenges CPI Kenya face, he maintains his vigor. Hands down, funding is the organizations biggest challenge because there are so many children and families to engage in the Peace Building program and Heifers for Peace program. Over the next 8 weeks, we are hosting a major fundraising campaign for the Heifers for Peace program through Global Giving. There are currently 100 families (50 Pokot and 50 Samburu) who have successfully earned a heifer to share amongst each other, and we need to raise more money to buy these heifers by mid-August! Please consider donating and helping bring peace to Northern Kenya. If you can wait, I ask you to consider donating on July 18th at 9am EST – on this day, Global Giving will match all donations by 50%!

Next week we will be heading into the field to Baringo County to host a Peace Camp in the village of Chepkalacha. We will have 250 Pokot and Ilchamus children begin their interactions with each other and form friendships; hopefully two years from now, they will have successfully formed friendships between their families and will be ready to earn a Heifer for Peace. I am so ecstatic to be heading to Chepkalacha with my CPI Kenya teammates to see them in action, empowering children to be protagonists for peace and working with the pastoralists communities to bring peace in Kenya.

During a time when children at the U.S. Southern Border are being treated like criminals, I feel encouraged by CPI Kenya’s recognition of the importance of children. The revolutionary ideas of Hilary have the capability to change the Peacebuilding field; he views children not just as victims of conflict, but also the starting point to ending conflict.

All great social change starts with a small group of people who have a big idea; why can’t it be CPI’s?