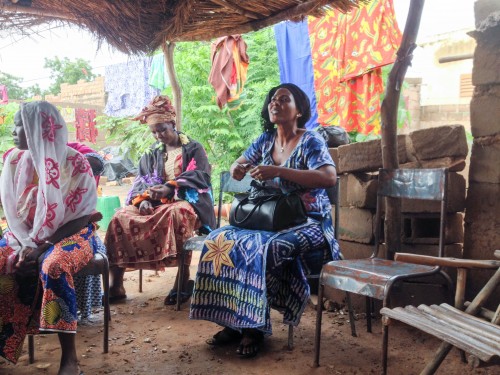 Towards the end of a very busy day of financial donor reporting the power went off, and with it went the Wi-Fi connection, the cool air from the fans, and the battery of my laptop that I had just started charging. Power cuts are pretty common; in the hot season, they occur almost everyday for a couple hours, but since the rainy season began they have become much more manageable. Luckily I was almost done; I sat outside, filled in the last few excel cells, checked my formulas and formatting, and saved my work.

When I walked back into the office, one of Sini Sanuman‘s community organizers, Assetou Touré, was just finishing a conversation with a mother she was trying to help to not excise her daughters. The woman did not want to excise their 12 and 14 year old, but her mother in law was adamant that the girls be excised when they go to their native village for their school vacation, and her son, the girls’ father, was powerless against his mother.

Assetou had spent a lot of time speaking with this couple, and on this particular afternoon, gave the woman a document about the Universal Declaration of Human Rights (UDHR) and the Convention of the Rights of the Child. She hopes this will help her convince her mother in law that excising her granddaughters is wrong.

We spent the rest of the afternoon talking about beliefs about excision in Mali, the importance of mothers communicating openly with their children, and Assetou’s prior work protecting the rights of sex workers.

I mentioned that someone had told me that excision is practiced in Islam to reduce women’s sexual desire. We agreed that harmful practices such as excision and early marriage are justified by a fear of young women dishonoring their families by engaging in risky sexual behavior. The response is to attempt to control women’s bodies and behavior, rather than educating both men and women about the possible consequences of unprotected sex – such as unwanted pregnancies, which can lead to rejection from families, sexually transmitted diseases etc.

Assetou, a true community outreach organizer, believes in the power of communication and education. She explained to me that she speaks to her children openly about sex and the negative consequences that can come with it, and that as a result her children can talk to her and have thrived. She wishes that more parents spoke to their children the way that she does.

She told me about her past work educating sex workers about their rights and the importance of insisting on condom usage. She found that several of the young women got involved in this work because of bad relationships with their parents and a lack of communication, which resulted in them leaving home and engaging in sex work to feed themselves. She cared so deeply about these young women that she helped a few of them find alternative employment in places like hair salons.

Assetou is a very passionate, loud woman, who is not afraid to say whatever comes to her mind. She speaks very openly about anything and everything, like the unsanitary conditions children are excised in, how they are not informed of what is about to happen to them leading to trauma, and how she had to be careful about who saw her in bars talking to sex workers because her husband is very jealous.

Usually out in the field, any time she is in the office she enjoys a lively debate with the men in the office. She also has great taste in music and can be found singing and dancing along to Flavour or Oumou Sangaré.