Last week I lost any sort of fear I may still have had of speaking Spanish in front of large audiences. For Colombia’s Semana por la Paz (Week for Peace), I had the opportunity to participate in community and high school meetings in Medellin at the beginning of the week, a 4 hour forum on disarmament with youth groups and community leaders in Bogota, and the Latin American meeting on Disarmament with 150 youth and community members and another Panel Discussion on the Role of Women in Reconciliation in Medellin. 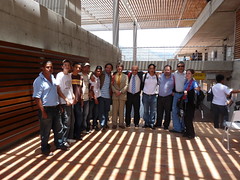 The Latin American Meeting on Disarmament was particularly exciting. As the only woman of five international speakers, I had the opportunity to bring a gendered perspective to the discussion on guns. I was the only one to emphasize the role of masculinities in the demand for guns and point out the particular effects of guns on women in the home. Many people came up to me after the presentation to ask questions and comment, including two victims. “What should one do if the aggressor is part of the State?” one woman asked me. She told me that her husband is a policeman and has always been extremely violent. She confessed that she can’t leave because she is economically dependent on him. She was too afraid to be filmed and couldn’t stay long enough to tell me her story in detail, but agreed to send it to me by email. Another woman, whose husband was also a policeman, approached me and agreed to share her story. She wanted to remain anonymous so I took a picture of her hands. I noticed that her skin was covered with white marks. “Did he do this to you?” I asked. She shook her head. “Leucoderma. It’s a disease. From the stress caused by so many years of abuse, fear and intimidation.” 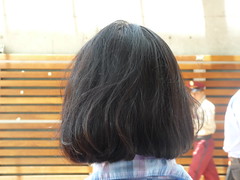 We married 38 years ago. Two months after the wedding, I found out that he already had a daughter from another woman. One day he brought the girl, his daughter, and asked me to take care of her. I agreed.

We lived in his parents’ house. My sisters-in-law started inventing stories to create problems, intervening in our relationship. He began to have a mistress. We would argue.

Two years after our wedding, he became violent. He asked to be transferred to a town in Antioquia and there he found another mistress.

He was a policeman. He would threaten me with his gun. 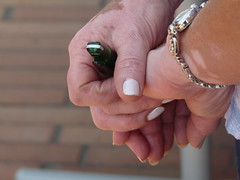 He would arrive at the house and tell me he didn’t want to live with me anymore, pointing a gun at me, to intimidate me. I would say yes, that we could start filling out the legal papers to get a divorce, but then he would change his mind and say he wanted to stay with me after all.

One time, he arrived really drunk. I was very afraid. I took his gun and hid it. It was horrible. He asked me where his gun was. I said I did not know. He became furious and almost destroyed the house searching for the gun. He hit me, mistreated me, roughly battered me for hours and hours demanding the gun. Then he went back out to the street.

I decided to speak with the police commander. He was very understanding and decided to transfer him to Medellin. There, my husband continued to have mistresses. I found them together.

My husband continued to threaten my son and me with the gun.

When he was 12 years old, my son confronted his father. He said he couldn’t stand seeing him treat me like this anymore. Either we would leave or he would. So my husband left, found a piece of land. Now he is retired and no longer has access to a gun, but he continues to be violent when he visits us.