A Quick Word on Agent Orange 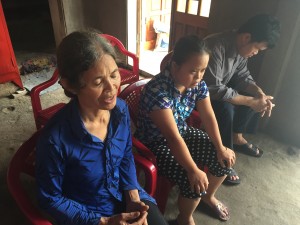 Mrs. Duong Thi An with her children.

In my conversations with friends and family back in the US about my work and AEPD’s work in Vietnam, one question seems to come up a lot: how do I know that the often horrific disabilities suffered by the people we’re working with were specifically caused by Agent Orange? The honest answer is that I don’t, not for certain.

The debate over the extent to which Agent Orange affects humans, and whether these effects are passed down to their children, has been raging for decades, and from what I can tell there don’t seem to be any truly definitive answers. The Vietnamese Red Cross estimates that as many as 3 million people in Vietnam suffer from the effects of Agent Orange, including over 150,000 children of those directly exposed, but of course some would argue that Vietnamese organizations, and the Vietnamese government, have an incentive to exaggerate the problem (though I’m not sure how true that is).

The US government has consistently resisted attempts to connect Agent Orange with more health problems, but legal battles over the years have forced the government to gradually open health benefits to American veterans of the Vietnam War who are suffering from one of a list of conditions causally linked to Agent Orange exposure (though not their children, yet). But the government denies that Agent Orange causes the same diseases in Vietnamese, and official proclamations on the issue have been intentionally vague, emphasizing the lack of consensus on Agent Orange’s health effects and particularly its effect on future generations. As I mentioned in a previous post, the US’s aid for persons with disabilities in Vietnam has gone out of its way to not specifically focus on victims of Agent Orange, since that would imply that the US is responsible for their condition. The implications of admitting that Agent Orange’s effects can be passed down make it unlikely that this will happen; for their part, some American veterans’ advocates believe that the government is cynically attempting to “run out the clock” by delaying a definitive answer to the question until the veterans demanding it are dead.

So much for the scientific debate. I’ve been reading a lot about this topic, and I don’t feel like I’m much closer to understanding the actual details of Agent Orange’s effects and the different views on the subject. I’m no expert, and definitely no scientist, so I can’t give an informed answer or evaluate anyone’s symptoms to figure out where their disability came from. But I can give my impressions having met seven of these families (with more to come).

I’ve felt that all the beneficiaries I’ve met have been sincere. I’ve spoken to them about their experiences, and they all seem convinced that Agent Orange is responsible for the disabilities suffered by them or their children. They’ve all served in areas where Agent Orange contamination is known to have been a problem—a couple actually described having the chemical dropped on them, while others were simply stationed in contaminated areas or participated in cleanup operations. None of them dwelled on the use of Agent Orange as a weapon or any outside responsibility to care for its victims, but they also never expressed doubts about Agent Orange’s role in their troubles. AEPD, the Vietnamese government, and in some cases other advocacy organizations or NGOs have all recognized these families’ status as Agent Orange families, and in the end, I believe them too, even without “hard” evidence. After all, in the end, these beneficiaries would be worthy of compassion and support no matter what the cause of their disability. The fact that these disabilities are man-made only makes their stories more tragic and the benefits of supporting them greater.