Lest you think that all I’ve done since coming to LSN-V is attend meetings and workshops (admittedly, there were a lot), I’d like to introduce you to some survivors that I got to meet recently. They’re all remarkable, but one who made a big impression on me is Ms. Thuyen.

I was tagging along with Mr. Quyen, the Economic Opportunity Coordinator, and Mr. Hoc, an outreach worker, when they went to visit her at her home. They were there to see how she was doing with her pig farm. Before business, though, came the real business of sitting down over tea and catching up. The three of them joked like old friends, and soon she pulled me in too. 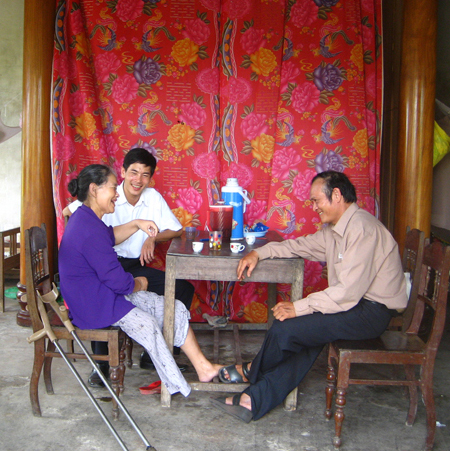 She’s an good-natured woman with a sparkle in her eye and a ready smile. She works hard: her hands are callused and her arms are muscular and strong. Meeting her, you just know she has an amazing history and you’d be right. During the Vietnam War, she was a member of the youth volunteer team in her community. One day, the area around her village was bombed and everyone rushed underground to take shelter in a tunnel–when it suddenly collapsed. Ms. Thuyen took her duties as a youth volunteer seriously, and she was helping to dig people out and pull them to safety when she stepped on a landmine and had part of her right leg blown off. She was 19 years old.

title=”Ms. Thuyen’s pigs, raised with the assistance of LSN-V” width=”240″ height=”180″ align=”left”
hspace=”7″ vspace=”7″/>She stayed in a hospital for a year, recovered, and eventually had two children. When she began working with Mr. Hoc, the outreach worker in her area, one and a half years ago, she was almost 60 years old and had worked in various farming enterprises since the war. To Mr. Hoc and Mr. Quyen, she outlined a business plan to raise chickens and pigs for selling and breeding. The idea was sound, and they referred her to organizations that would help her get the skills and resources to raise the animals successfully. LSN-V also contributed some raw materials, like bricks and cement, to build a pen for the animals.

Ms. Thuyen’s venture is doing well. She still actively volunteers her time in the community. In fact, she is one of the elected executive board members of her commune’s self-help club. I think she’s wonderful; she’s a survivor, a respected force in the community, a source of support for others. But she’d probably be the first to laugh and say, “anyone else would do the same.” 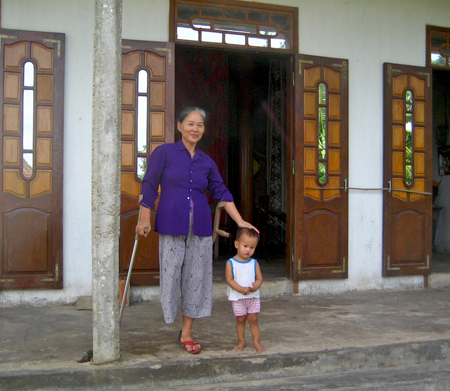