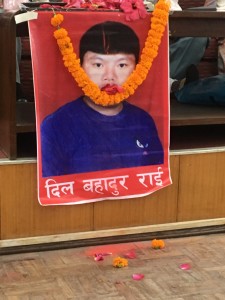 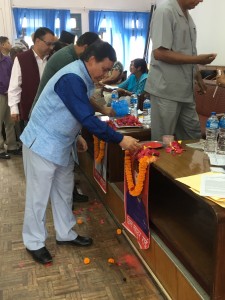 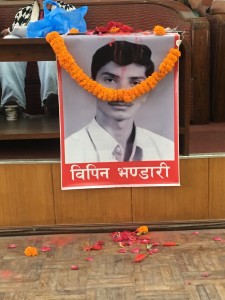 On June 17th, 2017, NEFAD’s Director Ram Bhandari invited us to a memorial event hosted at the office of the Attorney General in Nepal and we bore witness to some of the ways families are coping. Bipin Bhandari, pictured on the left, was 22 years old when he was disappeared during the conflict. Dil Bahadur Rai was about the same age. Their fathers spoke at the start of the memorial service. Bipin and Dil had so much life left to live. As people filled the room at the office of the Attorney General, Prabal told us that all had a family member who had been forcibly disappeared. To see a room filled with mothers and fathers gazing at portraits of these two boys, draped in marigolds, offered a mere glimpse of the magnitude of grief faced by Nepali conflict survivors.

A series of speeches commenced, and I was surprised at the speeches’ political bent. The loss of Bipin and Dil is inextricably linked to the ten year conflict and subject to structural holdups. Because of this, survivors’ grief has been forced to encompass not just personal loss, but collective trauma and advocacy for political action. Speakers gave their testimony, some had temporarily been detained and disappeared themselves. Mostly, I sensed exhaustion. One woman expressed anger at the efforts of the Truth and Reconciliation Commission to “restructure itself rather than respond to victims.” With force she said, “We are tired of speaking on these issues.”

Charam Prasam, a prominent human rights activist in Nepal said something that resonates with people in all countries: “There must be a certain level of honesty in politics. Where is the honesty? Where is the accountability of the state?” as he critiqued Nepal’s transitional justice process.

There is a cruelty to the waiting families are experiencing. Enforced disappearance is illegal under international law, per the International Convention for the Protection of All Persons from Enforced Disappearance. Some say that the crime of enforced disappearances is a particularly cruel form of torture, withholding from them any truth about how or why their loved one perished. The Center for Victims of Torture describes the ambiguous loss that compounds grief,

“Indeed the psychological suffering associated with disappearance, a type of ambiguous loss, is an immense burden on the family members. Ambiguous loss differs from ordinary loss because it lacks closure or clarity without understanding of what happened or whether a loved one is actually gone.  As a result, many question whether they should grieve the loss of a loved one or continue to hold out hope.”

Memorial services like the one we attended are one way that families have sought to remember their loved ones while processing their emotions. Grief is a profoundly human experience, and rituals for acknowledging it are passed from generation to generation – an unending link to traditions of the past.

When I arrived in Nepal, I felt ill-equipped to step into someone else’s grief, to ask families prying questions about something so personal seemed terribly intrusive. People’s grief is sacred. I didn’t want to cause them any more harm based on my ignorance. I worried about not knowing traditional grieving rituals. In an effort to familiarize ourselves with Nepali traditions on addressing death, Prabal Vicky and I visited Pashupathinath Temple, a place unlike any I have ever experienced before. 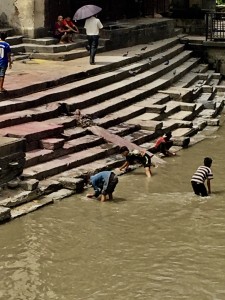 While not all families who experienced enforced disappearance are Hindu, many of the families I work with in Bardiya share the Hindu tradition. Prabal explained to us that in Hinduism, humans are said to be birthed at the river and to return to the river upon their death as they await reincarnation. Pashupathinath temple is a holy site for devotees of Shiva. It is built alongside a river bank that is lined with funeral pyres where bodies are cremated. Prabal guided us through the space, a place in which society is invited to share in death rituals.

I asked Prabal if it was ok for us to be there, sharing in the most difficult and emotional moments of people’s lives. Prabal said that it was, so we sought to be very respectful witnesses. It was striking how communal an experience funerals are at Pashupathinath. It is a place that invites reflection. We were very quiet, and I thought frequently about how families in Bardiya had been denied the right to these rituals. While terribly painful in and of themselves, rituals matter in grief. They don’t fix the pain, but as Prabal told us, cremation allows families to see that their loved one is gone. There whereabouts are no longer ambiguous.

I haven’t been able to stop thinking about our trip to Pashupathinath. It is a place that must be experienced, and not necessarily understood, but rather respected as a deeply holy place.

Learning about the ways families have shouldered grief without access to their rituals renewed my admiration for the ladies of Bardiya. They are resilience personified. While we were in Bardiya, we asked the members what they would name themselves. They chose The Bardiya Conflict Victims Cooperative. The Nepali translation of cooperative has a stronger connotation than the English word. It means mutually supporting and uplifting one another. I asked them more about their choice to identify as “Conflict Victims” rather than survivors. I admit that this decision initially surprised me. They said the choice was not because they considered themselves victims, but because the crimes committed against them were the platform that brought them together.

Fudiya Chaudhari, who I wrote about previously, explained, “Before we were united, it was very difficult to express our grief. We were alone in our homes. We became much stronger [after] sharing our grief to advocate with the state.” They  named themselves, and I respect their name. The Bardiya Conflict Victims Cooperative is transforming their grief into mutual support and care. If that isn’t resilience in the face of grief, I don’t know what is. 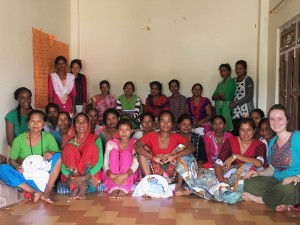 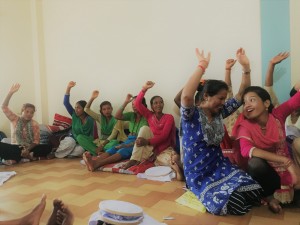