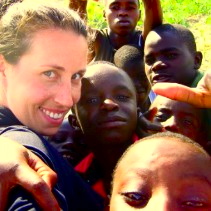 
An Introduction to the Slums

The passage above was written in the travelogue ‘American Notes’ by Charles Dickens in 1842 during a walking tour of the Five Points slum in New York City. His vivid details of the 19th century urban slum and the lives that were surviving within ignite the senses in all their foul glory. Although rife with unnecessary upper class disdain and misunderstandings, Dickens predecessor of the modern day travel blog was one the first thoughts that came to my head when it dawned on me that I may not have the adequate skills to convey the modern African urban slum.

However here is my attempt….Don’t judge me too harshly Mr. Dickens:

Upon entering the slum, you immediately feel the world close in, the light disappears, and the air turns rancid. Homes are literally shacks made up of material the occupants were lucky enough to stumble upon in their scavenging efforts. Rigged tin sheets, rotten wooden boards, and crumbling red mud and grass are nailed, packed or tied together in crooked patterns to form small square rooms barely higher than five feet. Swaying back and forth on an exposed wire is a single light bulb illuminating the cramped quarters inside. A single mattress may have been obtained if fortunate, but if so it can be possible for 5 or 6 people to be sharing it. There are no glass windows in these shacks, or doors for that matter. A single curtain of thin material hangs to provide a mocking sense of privacy.

A glance into a tailoring shop in Kibera slum

The ground is dirt mixed with trash and after the rains a bog is formed of mud and waste made up of all you can imagine. The alleys are an impossible maze of twists and turns and are narrow enough at times for only one person shuffle by sideways. Running down the middle of these alleys is a trench which carries the flow of sewage water, plastic bags and old shoes which on more than one occasion I witnessed people picking up and trying on. Emaciated packs of dogs and cats scurry through their own passageways in search of food or trash that smells close enough like food. Children wander around unattended and if lucky are wearing shoes. However, wherever I travel a high pitched chorus of “Allow! Ow are you?!” mixed with giggles and laughter trail beside me.

A newly paved road in the Gomongo Slum. To make the road, the governemnt bulldozed any building in its way including half a school

In the past week I have been to four slums around the hectic and crowded city of Nairobi Kenya: Mathare, Kibera, Dandora, and Gomongo. In total, over 2 million people live inside these and other Kenyan slums. To offer some perspective, the entire population for the state of Utah is just over 2.5 million. The largest slum in Africa, Kibera, is approximately the size of Central Park and houses 1 million of the total slum dwelling population.

As an outsider, and a white ‘muzungu’ one at that, my presence in the slums is simultaneously an attraction and an irritation. Besides the obvious safety concern, taking out my camera to capture the images of the slum feels like an invasion of privacy that turns the suffering of a people into merely a tourist attraction. You grab the shots you can, but as future notice to readers, when it comes to obtaining illustrated evidence of my work or allowing the poorest of the poor to maintain their dignity, I will choose the later and simply work on achieving the descriptive powers or Mr. Dickens.