I must admit that the pace that I am collecting information has been a lot faster than I can disseminate. So much has happened in the last few weeks and low Internet connectivity has delayed many posts. But I’ll start from the top and work my way down. 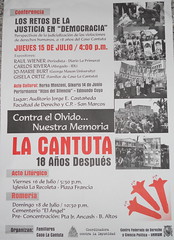 As I had mentioned in my previous blog, the anniversary of the terrorist attack on Tarata Street occurred July 16th, 1992. It is by no accident that the anniversary of the La Cantuta Massacre also passed two days afterwards. It was after the Shining Path bombed Tarata Street in the touristy area of Lima, that the Fujimori administration also cracked down on terrorism in the worst way; by shedding more blood.

As university students were often the instigators of leftist political involvement, what was an end of a semester party at La Cantuta University for these students, also ended up being the last night of their lives. A military death squad under Alberto Fujimori, now known as El Grupo Colina, was later found guilty of kidnapping nine students and a professor, driving them to a remote area where they were each shot and then buried. Later some of their bodies were transported elsewhere and burned to further hide the evidence of the crime. It is for this reason that the tombstone that honors these students in the Cemeterio “El Angel” in Barrios Altos, only contains fragments of these students’ remains. Some of the bodies still have not been investigated, found, or recovered to the families.

Although eighteen years ago, the family members of these students and professor, are still fighting for the right to truth, justice and against the impunity which has kept them from knowing the whereabouts of their loved ones remains. In fact, I attended the memorial service in memory of these lost lives on Sunday, July 18th. 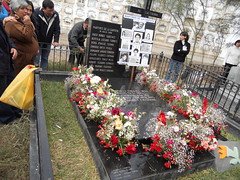 The cemetery is located near San Juan de Lurigancho and one of the more underdeveloped areas of Lima. As I exited the cab, the flower vendors were inundating me with their bright bouquets. The site of flowers overwhelmed me, as the women had surrounded me, and followed me into the gates of the cemetery. My lack of need for flowers accentuated my role as an outsider. And yet, even where there’s death there is still a strong need for sales to support the living.

In fact, the cemetery was very alive that day, much more alive than “The Eye That Cries” sculpture which I had recently visited a few weeks prior. Vendors sold coconut sweets, women cleaned their families’ tombstones, replacing wilted flowers, and a band of La Cantuta students played music and danced for the family members. 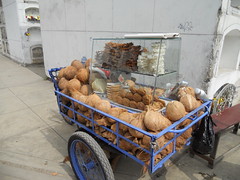 Upon stepping into the mausoleum I was struck by the rows and rows of tombstones, as though I had walked into a museum of the dead. The number of people present that morning was even more incredible. As though their lives were lost just a week prior. The older brother of professor, Hugo Muñoz Sanchez, who was killed on July 18th, 1992, retold an emotional account of the story of that evening in front of the large granite tombstone inscribed with the ten names of each victim. It was adorned with the same flowers I had nearly run away from at the entrance. Some of these students were my age when they lost their lives, others as young as 23. I couldn’t help but think that if I was politically active during this epoch in Peru I could have easily been a victim, as revenge often has no mercy.

This day however has become symbolic of the continued struggle of these family members in Lima and throughout Peru to pursue the investigations of their disappeared family members. The wound is still open for those who don’t know where their family members are. The Cantuta Massacre is one of the better-known cases of forced disappearances as it was among the crimes used in the conviction of Fujimori on April 7, 2009 for human rights violations. It also differs from much of the stories I heard while in Ayacucho in that most of these victims were of a higher socio economic status than the Quechua speaking victim prototype which make the majority of those who died in 1980-2000. 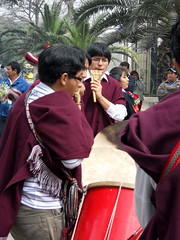 From what I also understand many of these family members have received more State attention than the majority, as they are situationally better located to adhere press attention. Although this morning was nonetheless morose, it was also obvious to me that these family members aren’t just mourning but they are fighting.

Carmen Oyague Velasco, is the mother of one of the female students whose life was taken that evening, whom I later spoke to. She told me while knitting a panel for “The Scarf of Hope” that:

“We want to continue fighting because we want to know what happened to our family members. The truth is, it’s not easy to lose a family member, a loved one that disappears from home overnight. It’s very painful, especially when you have small children … But we are not going to be quiet until we find the rest of the body parts from the other graves because the Interamerican Court of Human Rights gave an order to search for these bodies. What happens is that the authorities here in Peru pay little attention to these claims made by the family members, they mock human rights, that’s what we don’t want to happen, to continue happening in our country. It’s been so many years, eighteen years, and that is not a small amount of time, but it’s nothing for us.”

Her daughter, Dora Oyague Fierro, was never found but she still continues to search for the truth. She stood there, as a testament to others that although she still lives with the pain of losing a child, she has also chosen to fight against impunity, and with that she is a voice for those who are voiceless, holding a banner for the press that reads: “LA CANTUTA 18-JULIO 1992, NO TO IMPUNITY, THE FAMILIES WON’T BE SILENCED!” 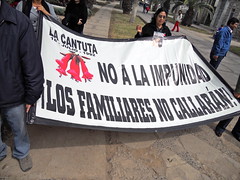