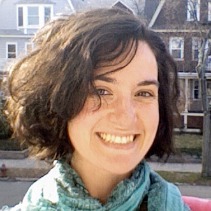 Rachel Brown (Alternative Information Center - AIC): Rachel graduated in 2005 from Brown University where she concentrated on Middle East Studies with a focus on the Israeli/Palestinian conflict. She then entered Teach For America and taught seventh grade English in southwest Atlanta. Rachel then worked as an intern at CARE and also at The Carter Center, where she researched and wrote about the rule of law in West Africa. She also volunteered for the Liberian Truth and Reconciliation Commission Diaspora Project. At the time of her fellowship Rachel was a graduate student at The Fletcher School. Her specific areas of focus were on reconciliation processes and youth and gender in conflict. After her fellowship, Rachel wrote: “I am more open-minded, and open to listening before advocating. I have greater appreciation for grass roots NGOs and the importance of civil society in formal negotiation processes. I feel more confident in my ability to succeed in a difficult circumstance, professionally and socially.”


Artists Talk About the Wall

While strolling Ben Yehuda Street in downtown Jerusalem a few days ago, I came upon a chain of Bezalel folks doing this: 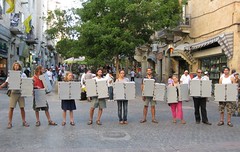 In a horizontal line, they each held a gray box that represented a brick in the wall between Israel and Palestine. The purpose of the art demo: to engage the Israeli public in conversation about the latest concrete structure between Israel and the West Bank that stirs disagreement among all facets of Israeli society.

For those who wanted to join the chain of artists, there was an additional pile of gray boxes stacked next to a nearby bench. The power of the installation was made evident by a teenage girl who stomped on the pile until it flattened. What struck me most about the girl was not her disapproval of the installation, but her degree of political certainty for such a young age. Off to the side, a project organizer explained that whether one believes the wall is a security essential or a government attempt to occupy more land, whether one comes from the right or the left, the conversation must become more public.

Leave it to the art students to find ironic ways of being heard: as part of the installation, the demonstrators were instructed to not speak a word to pedestrians who engaged with them. In the end their silence allowed engaged Jerusalemites to debate the wall with each other while the art students watched. Let’s keep talking about it, I say.