In Iraq, Ashwaq had a normal life. She was studying to be a math teacher, but she didn’t graduate and got married instead. She stayed home with her two children; they are 10 and 7. Eventually, life became more difficult. Her family is Sabaean and people began harassing them, “You must read Quran. Why don’t you wear black?” They tried to force Ashwaq’s husband to join the Hashid, an anti-Daesh militia. “We were older and we understood that there were people with different religions, but our children were too young to know these differences,” she says. Ashwaq’s children didn’t see why they were being asked why they don’t dress like everyone else or if they read the Quran like everyone else. They felt upset when people accused them of not loving God. They would come home every day, “My friend said this, my friend said that.” Sabaeans are people of the book in Islam, so she felt it was even more jarring when people would say the Quran said no such thing. Ashwaq says, “They wouldn’t even drink the same water as us.” 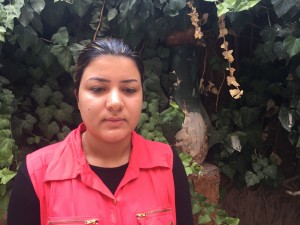 Originally, Ashwaq’s parents came to Jordan. Once they left, she began to question what she even had in Iraq. They told her that her children would not be bothered the way they were in Iraq and that life was nicer in Amman. They felt safe. Ashwaq told her husband she had made up her mind; she would go to Jordan with or without him. But he felt that they didn’t have a community left in Iraq, so he decided to come with her. Ashwaq’s parents were resettled in Australia two or three months after she arrived in Amman. At first, she was sad that they had convinced her to come and then left, but she is happy they can relax now.

Overall, Amman is better. There is safety and security that Ashwaq and her family didn’t have in Iraq. She says she can dress how she likes and so can her children. However, her husband left his work behind in Iraq and Jordanian law doesn’t allow Iraqis to work. He tried to find work anyway, but he couldn’t.

Ashwaq and her husband applied to go to Australia to be with her parents but they were rejected. They are trying again because she doesn’t know anyone else in Canada or Europe, where the UN suggested they try. It’s not just her parents there; she has uncles and cousins in Australia also. There is a big community of Sabaeans where her parents live. “Here, we celebrate holidays at home. We don’t have family to visit, but in Australia we could go celebrate with family,” Ashwaq elaborates.

Ashwaq’s children have a hard time with school here in Amman. They started, but she was scared for them so she pulled them out. She put them in the Kids Club at CRP, but her older son doesn’t want to be with the younger kids. He says he wants to go to real school with students his own age.

She says she would be thrilled for her children if they were resettled in Australia because they did not have a real childhood. “In Australia, they could go to school and be free.”