For my next blog posts, I will be highlighting two women in the Bardiya Conflict Victims Embroidery Cooperative who kindly agreed to share their stories with me. During our first trip to Bardiya, Sarita, Prabal, and I took a rickshaw to Belmati Tharu’s house in Basgadi. When we arrived, Belmati and her family were going about their daily housework. Prabal, Sarita, Belmati, and I sat outside on straw stools. Next to us was a piece of cloth with hundreds of kernels of corn. She and Sarita talked for a few minutes, and then Sarita explained that we wanted to ask her some questions for a video about NEFAD’s work.

Belmati maintained a sad look on her face through the entirety of our conversation, so I asked Prabal multiple times if it was acceptable for us to interview her. He and Sarita reassured me that it was and added that Belmati is generally a very somber person. Hesitantly, I asked my first question, and Prabal and Sarita translated.

She spoke specifically about her son’s disappearance. She explained that he had a problem in his stomach and that it was difficult to afford heath care. They didn’t have an economic cushion to address hardship. She explained that the people from the Maoist party came to him and asked him for some help. He helped them with the expectation that he would receive treatment for his stomach. While he was on his way to a follow-up medical checkup, he was arrested from Kohalpur Chauraha. It’s still difficult for Belmati when she remembers them. She mentioned that her home and her family would be happier if they were alive. 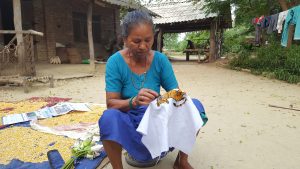 Belmati showing us her tiger square

After she explained the disappearances, I asked about her participation in the embroidery cooperative. Belmati explained that it’s nice to be with other people who have had similar experiences of the conflict. She told us that she enjoys doing the embroidery, but it’s increasingly challenging due to her age. She expresses that if they could regularly work on the embroidery, it would be a better way to make money, at least to purchase some groceries.

To support women like Belmati in continuing the embroidery work, please visit and share our Global Giving page where we are raising money for embroidery supplies.