Sending Your 10 year old Daughter Away to work Part 1: Between a rock and a hard place

SWAN’s campaign to eliminate the Kamalari practice has seen much success in the past decade with families willingly bringing back their daughters from work. SWAN has also been helping support the education expenses of ex-Kamalaris, and is also providing some form of livelihood support to their families. However, there are still a lot of families in Dang who see no other alternative to sending their children to work in order to survive. In order to comprehend the tribulations of such a family who had sent a daughter to work, I asked one of SWAN’s Social Mobilizers, Sita Chaudhary, to introduce me to such a family. 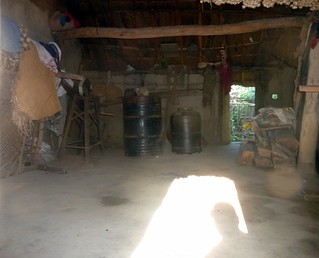 The hut where Ram Dwari Chaudhary lived with her two sons and daughters was empty when we arrived. Upon asking the neighbors about her whereabouts, they told us she could be collecting grass somewhere or working in one of the two mills in the village. We decided to look for her in the mills, and as we headed out to look for her, Sita, who had been in touch with the family for the last 4 years, filled me up on a bit of Ram Dwari’s background. Ram Dwari lost her husband, Lahanu Chaudhary, three years ago to an illness and she has been raising four children by herself since then. The oldest daughter, Sharmila Chaudhary, who is now 10 years old, was sent to Kathmandu to work for a family right after her father’s death. The oldest son, 15 years old Biren Chaudhary, seemed to have gone off to work somewhere as well. After we found the first mill to be empty, we headed over to the second one where we caught up with Ram Dwari, along with her five year old son who was taking a nap on one of the weighing scales.

Ram Dwari did not speak Nepali fluently, nor did I Tharuhati so I requested Sita to act as an interpreter. I asked all the questions I had on my mind, and a few more: why send a 7 year old girl to a complete stranger’s home hundreds of miles away; how does she feel having a daughter work as Kamalari; how does she handle her finances and support her children; what is in store for her remaining children; what would it take to bring her daughter back? After my conversation with Ram Dwari, with the help of Sita, the story that emerged seemed to echo a lot of similarity with what a lot of disadvantaged families are still facing in the region, which compels them to send their children to work either in domestic servitude or as laborers.

Sharmila was already working as a “helping hand” for someone else in her village by the time she was seven. Ram Dwari recalls that after the death of her husband, people with whom her husband had made arrangements to send her to work “relentlessly” came to her in order to take Sharmila away. As apparent in most of Kamalari cases, given the families economic hardships and the offer made by the employers Ram Dwari felt like she had no choice but to send Sharmila to Kathmandu to work. The employers promised to pay Rs.500 (USD 5.2) per month and provide Sharmila with good living arrangements, clothes, meals and a good education. For someone who makes a living managing a small plot of land she owns and doing seasonal work of maybe 3-4 days per month where she earns 300 rupees per day, not having to worry about the upbringing of a daughter while she was “taken care of” seemed to hold its own merits. 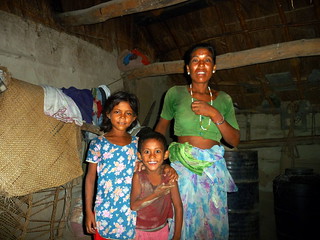 Ram Dwari’s older son, Biren Chaudhary, had gone off to the neighboring district of Rolpa where he was working as a laborer. Biren had been working since he was 10 years old, and never had the opportunity to get any form of education, and for the past three years had to take on the responsibilities of his father. Similarly, Ram Dwari’s younger daughter, Indra Kumari, had also been sent off to work as a Kamalari a few months ago, but she returned in less than a week as she “did not like the work that she was doing”. Ram Dwari mentioned that since Biren and Sharmila are already working, she would not force the two younger children to earn money and that she would educate them “as much as possible”.

When I enquired Ram Dwari about her daughter’s wellbeing, she said she could not tell for sure as her daughter was “very far” and she only talks to her when Sharmila comes back home, once a year. Ram Dwari, after a moment’s pause, seemed to be consoling herself rather than answering us, when she goes on to say, “I have not been there. I trust what they (employers) say. She will come to visit me soon, but it is better for her there than here. I do want to bring her here, but even her brother says it is better for her over there.” She went on to laud the employers “generosity” by mentioning that they even had promised to arrange for her marriage, when the time comes. However, when asked if she thought that would be in her best interest, she simply replies, “Of course not!” I wanted to know if Ram Dwari knew whom Sharmila was working for, to which she pointed out a house in a distance and said, “She works for the daughter of that house, taking care of their small child.”

Turns out, Sharmila’s employer, Shanta Hamal, used to live in the same village and had moved to Kathmandu after marriage. Sharmila was recruited to work in Kathmandu by Shanta’s mother who still lived in the village. Even though the employers were from the same village, and still had roots there, Ram Dwari had no clear idea whom Sharmila was working for. I asked her if she wanted to talk to Sharmila, as Ram Dwari had mentioned it had been a considerable period since she spoke to her. Ram Dwari said she wanted to talk, but did not have the phone number. Therefore, we decided to go to meet Shanta Hamal’s mother, so that Ram Dwari could talk to her daughter, and we could talk to Shanta Hamal and her mother about employing a 10 year old child.