When former North Vietnamese soldier Dao Thi Thuyen lost her leg during an American bombing raid in 1968, she considered her life ruined. The prospect of an agrarian life in Quang Binh countryside without a limb was bleak. 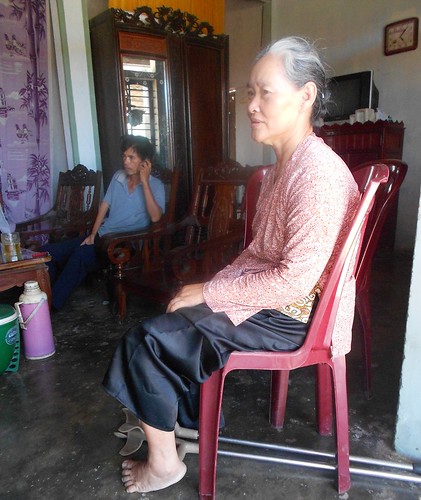 Unable to afford purchasing heating oil, Ms. Thuyen spent every day of the following 46 years of her life gathering and chopping enough dried wood to cook food and boil water for her family. These duties were made more difficult and time consuming by two forearm crutches she uses to walk. Everyday struggles like this are common among persons with disabilities (PWD) in Quang Binh, the majority of whom live in rural areas lacking accessible infrastructure. Predominantly poor, Quang Binh’s PWDs are unable to afford the devices and services available to PWDs in developed countries.

One month ago, Ms. Thuyen’s life changed. Due to a grant from the Association for the Empowerment of Persons with Disabilities (AEPD), Ms. Thuyen was able to afford the installation of a biogas system that converts the excrement of her pigs into fuel. As one of the program’s beneficiaries, Ms. Thuyen no longer must spend hours every day gathering and chopping wood. She told me that since her propane gas system was installed, she’s gotten some pressure off her back.

Ms. Thuyen’s biogas system is one of 45 AEPD is installing throughout Quang Binh Province in central Vietnam. Funded by French donor organization Zebunet, AEPD disburses biogas grants of approximately 7.155 million Vietnamese Dong (d) ($350) to qualifying rural households headed by persons with disabilities. The remaining cost of installing a biogas system is covered by beneficiaries, raging from 1.145 million d ($50) to 12.200 million d ($250) depending on the number of pigs a household intends to keep. 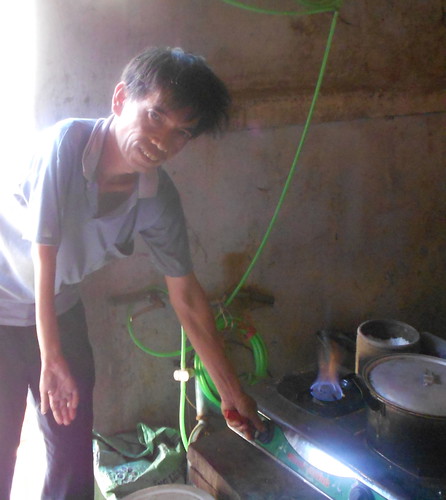 Dang Huy Thau, the Vietnamese government official overseeing the installation of the biogas units, told me that biogas has led to a dramatic improvement in quality of life for AEPD grant recipients. The use of biogas can mean the difference between subsistence living and the ability to save money. Aside from the economic benefits of producing essentially free fuel, the biogas units also serve to hygienically dispose of livestock waste, which decreases air pollution and the incidence of airborne disease.

I heard similar sentiments from aid beneficiaries, who told me that the smell of feces had limited the number of pigs their neighbors would allow them to keep. Ms. Thuyen says that her neighbors now visit her home to examine her biogas system and are impressed, wanting similar systems for themselves. She plans on purchasing more pigs now that the smell of their waste is no longer an issue. In the poor Quang Binh countryside, the ability to house even a half dozen more pigs can significantly increase a household’s income. 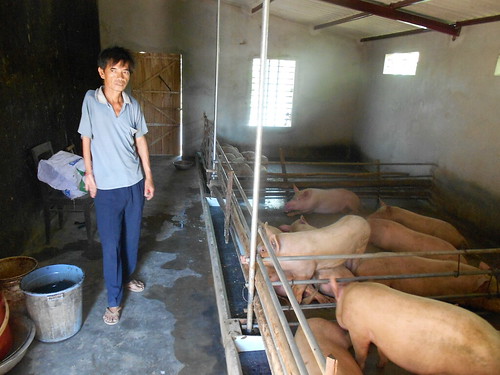 The spread of biogas throughout Quang Binh brings with it a sense that local actions are linked to global efforts to improve the environment. To receive biogas funding, AEPD requires beneficiaries to attend a training that, aside from instructing participants on how to use their biogas systems,  explains how using alternative energy sources combats climate change and deforestation. This discussion of biogas’ role in the larger effort for environmental sustainability has not been lost on aid recipients.  When I asked beneficiaries to describe the benefits of their biogas systems, they all began by telling me that biogas cleans the air and decreases the use of oil, which is good for the environment.

The value of biogas has already been recognized by more affluent rural Quang Binh residents, who are buying biogas systems out-of-pocket faster than local firms can supply them. Provider Ha Van Toan told me that even installing two or three biogas systems everyday he wasn’t able to keep up with local demand.

If this year’s program is a success, AEPD will try to find funding to continue providing biogas grants to Quang Binh’s PWD community. 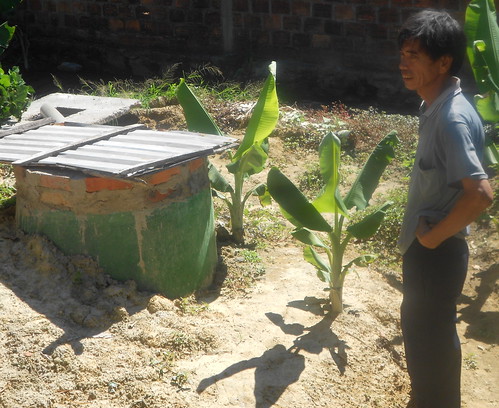 Mr. Dao Van Thuan stands next to the biogas tank in his backyard