Buying a Cow and Calf 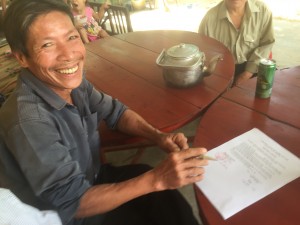 Ngo Gia Hue celebrates the purchase of his cow and calf.

Last Tuesday I traveled with AEPD staff to the home of Ngo Gia Hue and Tran Thi Thao, in a rural village around two hours north of Dong Hoi.

We’re here to complete the sale of a cow and calf, funded by the Advocacy Project and its donors, to Mr. Hue, which will bring in vital income for the family and allow Mr. Hue and Mrs. Thao to buy medicine for their three daughters, all of whom suffer from severe mental and physical handicaps due to Mr. Hue’s wartime exposure to Agent Orange. It’s an exciting occasion for this family, as well as AEPD and the Advocacy Project—this is the fifth family to be funded through the organizations’ partnership (we’ve also finished raising money for a sixth, which we’re currently working with to select a buffalo). 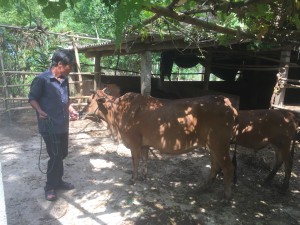 Ngo Gia Hue with his cow and calf.

Mr. Hue’s family was one of the first I met working for AEPD, and they greet our group warmly. The cow and calf have already been delivered when we arrive, and Mr. Hue takes us out to look at them. They look hale and healthy, at least to my untrained eye, and Mr. Hue clearly takes pride in showing them off. Mr. Hoc, the AEPD outreach worker serving families in this district, tells me that the cow is pregnant with another calf (it does look noticeably larger than I’d normally expect) and is expected to give birth in November. Mr. Hue will raise the new calf and look to sell the older calf to bring in money for his family.

We go back to the courtyard of Mr. Hue’s house, where a fairly large crowd sits down to conduct the purchase. Mrs. Thao sits off to the side with her daughters Huong, Nhan, and Tuan, who I met during my last visit. They look over at us from time to time, but don’t seem to understand what’s happening. Still, they seem much more comfortable with our presence than they were during our last visit, when Nhan and Tuan would not leave the house—Mr. Hoc later tells me that this is the least shy he’s seen them with visitors. 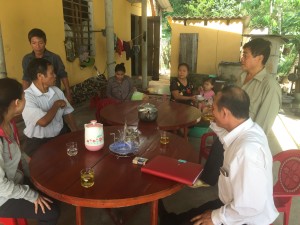 At the signing of the sale contract, with Mrs. Thao and her daughter Nhan in the background.

In addition to Mr. Hue and Mrs. Huong, a middle-aged woman who is selling her cow and calf to Mr. Hue, the group includes representatives from AEPD (Mr. Hoc, Ms. Ngoc, our AP associate Dat, and myself) as well as the vice president of AEPD’s local self-help group, one of many across Quang Binh province that organize persons with disabilities to support each other. An official from the communal People’s Committee (local government) is also present—as a witness to the transaction, I’m told. Since Mr. Hoc works with many families and can’t check in with Mr. Hue’s family more than once a month or so, the local government will help keep track of how this family is doing. 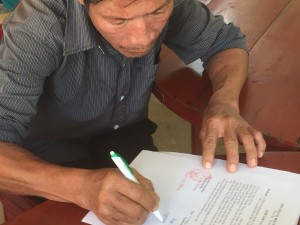 Mr. Hoc reads the contract between AEPD and Mr. Hue aloud, and Ngoc, who is translating for me, says that it’s a list of the expectations for each party. In exchange for the cow and calf, and for continued support from Mr. Hoc and AEPD, Mr. Hue is expected to follow the business plan he developed beforehand with AEPD’s help. After reading this contract, Mr. Hoc passes it to Mr. Hue, who signs it. 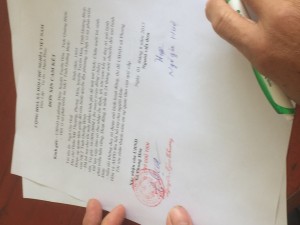 The completed contract certifying Mr. Hue as the owner of the animals.

At this point, the family’s dog begins making noise near where I’m sitting, and Huong, the oldest daughter, gets up and walks with difficulty over to the dog and shushes it (she apparently cannot speak). She looks over at me curiously for a moment, and it dawns on me, as it did during my last visit, that Huong, who appears to be a fairly tall preteen girl, is 33 years old. It’s hard to reconcile that fact with what I see.

I turn my attention back to Mr. Hoc, who is now reading out the contract of sale between AEPD, Mrs. Huong (the owner of the animals, not the daughter), and Mr. Hue. Once he’s finished, Mr. Hoc takes out a stack of blue bills worth 500,000 Vietnamese dong each (the largest denomination in everyday use) and hands it to Mrs. Huong. I am told that there are a total of 60 bills, adding up to 30 million dong—around $1,320. Mrs. Huong makes a show of counting the bills, pronounces herself satisfied, and signs the contract of sale. Mr. Hue, a grin on his face, does so as well. The transaction is complete, and Mr. Hue is now the official owner of the cow and calf. 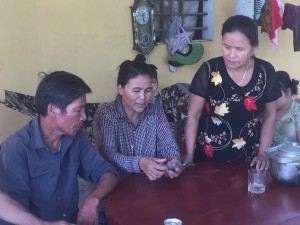 Mrs. Huong (center) counts the money she received as Mr. Hue and Mrs. Thao look on.

Our business is finished, but I still have time to ask Mr. Hue a few questions before we leave. Mr. Hue tells me that he plans on selling the calf once it matures, and that he’ll continue to breed the cow as well as raise the unborn calf and, hopefully, future calves as well. Having livestock has other benefits as well—the animals’ dung can be used and sold as fertilizer to help crops grow. He’s hoping for a total net profit of 20 million dong ($880), which he says will make a big difference for his family.

Mr. Hue’s longer-term goal is to pay for stomach surgery for his daughter Nhan, but even with the cow and calf the estimated price tag of 120 million dong ($5,279) is well beyond the family’s reach. Still, Mr. Hue believes that the extra income from the new animals will help him save money to eventually afford the operation, and AEPD will continue to look for new ways to support him in this goal. Mr. Hue says that he will now be more consistently able to afford enough food for his family, as well as medication to keep his daughters’ condition from deteriorating further. He had previously raised a cow but had to sell it to pay for the schooling of his (healthy) oldest daughter; he’s very excited to have his own animals again.

“Is there anything in particular you’d like to say to people who donated?” I ask, and as he responds I pick out the Vietnamese phrase cam ơn (thank you) several times while waiting for the translation. Speaking through Ngoc, Mr. Hue tells me that he wants to say thank you to the donors, and wishes them and their families good health and prosperity. “I am very thankful to all the donors,” he says, and he hopes that they will “continue to support families like mine” that suffer the impact of Agent Orange. Mr. Hue promises that he will keep up his end of the bargain by using the cow and calf as a jumping-off point to develop his business.

As we prepare to leave I have a few words with Mrs. Huong, the woman who sold her cow and calf to Mr. Hue’s family. “How do you feel about supporting this family?” I ask her. Mrs. Huong tells me that since meeting the family she’s been “upset about his children” and the condition they’re in, and she’s grateful to those who generously stepped in to help them. She says that she gave Mr. Hue a discount of around 1 million dong ($44) to help make it easier for Mr. Hue and AEPD to buy her cow and calf.

As we leave, Mr. Hue expresses gratitude for the donors once again and says that he’s optimistic about his family’s future. Having a cow and calf won’t make his daughters’ illness go away, or make the family’s lives perfect, but I can’t help sharing that optimism.