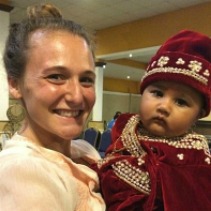 Gisele Bolton (Vikalp Women’s Group in India and CONCERN in Nepal): Prior to her fellowship, Gisele earned a BA from the University of Minnesota and an MA from City University London. Gisele volunteered in Honduras and Kenya, where she taught English and developed a connection to children with special needs. She also interned in the US with The Advocates for Human Rights and The Nonviolent Peaceforce. After working with transgender people at Vikalp, Gisele wrote: “One size doesn't fit all and we must always remember that.” About her fellowship at CONCERN she wrote: “(It was) enriching both professionally and personally! I always felt very supported and learned so much more about grant writing, fundraising, communications and development. I feel that is an area I'd now like to work in.” After finishing her fellowship with CONCERN, Gisele accepted another job in Nepal. gbolton@advocacynet.org

The migrants have started the long journey from their homes and villages traveling from the poorest and most remote areas of Nepal to Kathmandu Valley. For the next six months they will be working tirelessly from sun up until sun down in the harsh, dust-filled brick kilns. Not only do brick kiln employees endure unforgiving hours and conditions, but their children are also forced into working in the tough, hazardous environment. 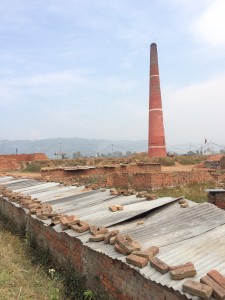 I visited two brick kilns in Bhaktapur that CONCERN works with and watched as families that have already arrived, till the land that was recently rice paddy fields. People were busy chopping, digging, and burning the remains of the roots and prepared the fields to become smooth areas for bricks to dry. Families labored together building their temporary homes made of bricks and tin roofs that will provide modest shelter through the chilly working season.

In the distance young boys were diligently hauling broken bricks from last year’s season to make room for the new batches of bricks. A group of toddlers played on a large sand pile near a water ditch used to make the clay for the bricks as women prepared tea over an open fire.

By next week over 1,100 employees and their families will labor and live at these brick kilns. A major upheaval in the lives of families for the next six months for a promise made to their broker to make enough bricks in the hopes to be paid by the end of the season.

Out of the 1,100 people working and living at the two brick kilns over 300 are children. These children pay the heaviest price. Their education is halted and they are often forced to work alongside their families, exploited and vulnerable. For these children the changing season means being stripped of their childhood. 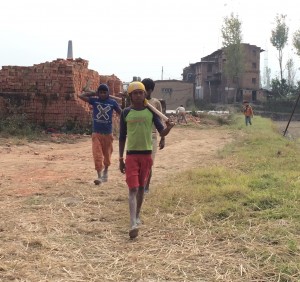