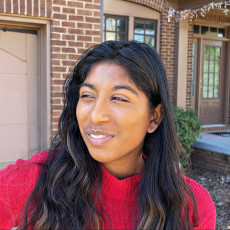 Nina Thakur is a rising Junior at South Forsyth High School. She is passionate about human rights, community service, and art. At South, she is Co-President of Vibha club, and has organized multiple fundraisers and community service projects within her community. During Covid19, she organized a grocery delivery drive to bring food to families facing food insecurity. She is also Vice President of her school’s chapter of National Art Honors Society, and the founder of art2inspire, a project that aims to increase access to visual arts in underserved communities. Through art2inspire she has delivered art supplies to 250 local students, as well as 85 students in India. She looks forward to working for the Advocacy Project to increase access to education for girls in Zimbabwe, and contribute to other projects.


Georgia’s Step in the Wrong Direction

Over the past year, it seems that the world has gone through an awakening. The deaths of George Floyd, Breonna Taylor, and Ahmaud Arbery have drawn attention to the widespread racial disparities, and systemic racism that still substantially impact our society today. This new awareness has prompted discussions on inclusion and tolerance and has brought a new wave of proposals and policies that aim to advance progress. However, Georgia’s board of education has taken an enormous step in the wrong direction, and voted to adopt a resolution that would prevent Critical Race theory from being taught in public schools.

Critical Race theory is the idea that racism is a systemic problem that has existed since the very foundation of America, rather than something expressed on an individual basis. It challenges color blindness, which is the idea that everyone is granted the same opportunities in life, and points out that people are currently given different opportunities because of their race. This difference exists not just because of racial bias, but also as a result of historic oppression that has suppressed groups of people, and because of racism buried in legal policies and systems.

While most schools in Georgia do not explicitly teach critical race theory, many have incorporated certain aspects into their curriculum which may now be banned. For example, schools often teach history from multiple perspectives. This includes pointing out many of the founding fathers were slave owners, explaining that slaves were defined as three-fifths of a person in the constitution, and detailing racist practices that existed after the abolition of slavery, like Jim Crow and redlining. Our country’s history is rife with oppression, and many teachers attempt to demonstrate how that history is part of the story of the United States and still contributes to white privilege now.

Unfortunately, the resolution would effectively censor educators and interfere with students’ ability to think critically while denying the systemic racism in our country. Under the resolution, educators would be prohibited from teaching that “…  with respect to their relationship to American values, slavery and racism are anything other than deviations from, betrayals of, or failures to live up to, the authentic founding principles of the United States, which include liberty and equality…” and that “meritocracy or traits such as a hard work ethic are racist or sexist, or were created by members of a particular race to oppress members of another race”. In effect, this would erase the historical context and deny the very real existence of white privilege in our society.