After talking to Ram Dwari Chaudhary about her daughter, Sharmila Chaudhary, who had been sent to work as a “domestic servant” in Kathmandu when she was only eight years old, we headed to meetup with the employer in Ram Dwari’s village that had recruited Sharmila to work. 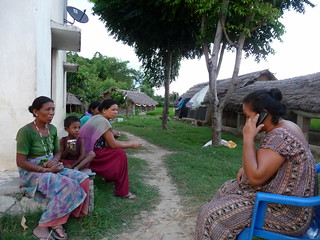 Compared to the empty hut, in more than one ways, that greeted us when we went to meet Ram Dwari, the home of the employer was bustling, not with family members, but with people seemingly working for the household. The compound greeted us with a two storied brick house with two fish farms, a pig farm, a chicken farm and some goats and buffaloes grazing around the house.

An elderly lady quickly came out to greet us, who introduced us as Shanta Hamal’s, the employer, mother (I will refer to her as Mrs. Hamal). We introduced ourselves, and told her that Ram Dwari had come to speak to her daughter, and if possible I wanted to have a conversation with Shanta Hamal as well.

As Mrs. Hamal was trying to reach her daughter in Kathmandu, I inquired about the professions her daughter and son-in-law were engaged in. Mrs. Hamal replied that her son-in-law was a teacher at some school and her daughter worked for an NGO! The phone went through, and after talking to her daughter for a while about how the family was doing, she introduced us as “people from THAT organization, SWAN, have come to talk to you about Sharmila.”

I asked Shanta Hamal the organization that she worked for, without any hesitation she said she worked for “Youth Campaign for Social Progress Nepal”, which is apparently funded in particular by UN agencies. I asked her if Sharmila could speak to her mother, to which she replied that Sharmila was “washing her hands and feet” and asked us to call back after five minutes in order to speak with her. I looked at SWAN’s social mobilizer, Sita Chaudhary, and we both knew that the five minutes was not for Sharmila to wash up, but for her to be coached on what to say.

During the five minute wait, Mrs. Hamal started explaining to us how she was certain that Sharmila was enjoying herself in Kathmandu, and how staying there would be good for her. Shanta Hamal, herself, seemed convinced that she was doing a great favor to both Sharmila and her family by employing her. I asked her if she knew how old Sharmila was, and she evaded the question by saying she was not sure but she had registered her as 12 years old in a “private boarding school”. Also, Shanta Hamal kept on referring to Sharmila as Jessica, which apparently was the name given to her when she moved to Kathmandu.

I reminded Shanta Hamal that it was illegal under Nepal’s law to employ someone who was 10 years old, or even 12 for that fact, to which she replied, “We treat her like one of our own, and people even comment that she is my second daughter. She hardly does any work here, and compared to the work that she was doing there it is like heaven for her here.”

I tried to interject by saying that even though that might be the case, what she was doing is still illegal, to which she commented, “We do not treat her harshly at all. I work in an NGO and know the appalling conditions that exist; we are not like THOSE people. There are people out there who mistreat girls, but we are not like those people. I am actually talking to my organization in trying to send her abroad for studies in the future.” I was truly aghast to hear the arguments she was presenting, especially as someone who admits to be “working in similar field.” 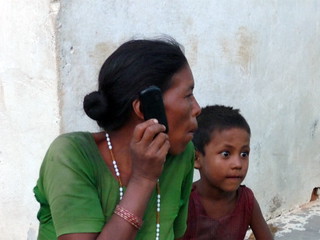 I quickly realized that anything that I said was just falling on deaf ears, so I asked if Sharmila, a.k.a Jessica, could speak with her mother instead. Ram Dwari eagerly talked to her daughter even though she had a hard time operating the phone. She let Sharmila know that her elder brother had gone to work in Ramechhap and that she was doing well with her little brother. The sound of excitement you would expect from a 10 year old on hearing her mother’s voice seem to be absent. Ram Dwari asked her when she would return home, to which she replied in about a month, in time for Teej festival.

After the conversation between Ram Dwari and her daughter seemed to be coming to a halt, social mobilizer, Sita Chaudhary started asking questions to Sharmila through speaker phone. Sita asked her how she was doing and what kind of work she performed. After a brief silence, we could hear voices prodding her in the background asking her to answer the question. Sharmila eventually replied that she was doing well and everybody was nice, and that she did not have to do a lot of work. Sita Chaudhary asked her if she had to cook or wash clothes; 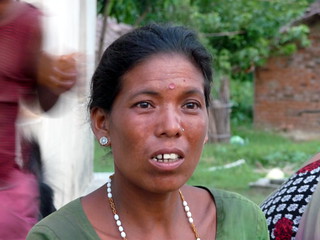 Sharmila replied that she did not do either and “aunty” did all of those. When Sita asked who washed her own clothes, she replied she did that herself. As I was listening to Sharmila’s response via speaker phone, Shanta Hamal and her husband were as vigilant and probably attuned to the questions being asked at the other end. Sita asked Sharmila if she wanted to come back home or if she enjoyed staying there with “aunty.” Sharmila replied she wants to stay in Kathmandu, and upon asking why she replied “because I get to wear pretty and new clothes.” Ram Dwari just smiled at that comment.

The conversation with Sharmila seemed to either have been expertly choreographed, or she actually felt happier being away from her family and home, both possibilities felt disturbing to me. After talking to Sharmila, we decided to reinstate our case to Shanta Hamal about employing a 10 year old. During our conversation on the speaker phone when both Sita and I started reminding her of the explicit law that forbade what she was doing, even if bound by good intentions, she, for the first time, sounded irritated by our consistent argument. It was then that she replied back to us with a tinge of vehemence and resentfulness, “If that is what she (Sharmila’s mother) wants then I am happy to send her back, there are plenty of others who are in the same situation like her (Sharmila)!!!”

As we headed towards Ram Dwari’s house so that we could meet her younger daughter, I was trying to process the arguments that had been made in favor of employing a 10 year old. Shanta Hamal persistently reminded us that Sharmila was getting education in a “private boarding school” and not any ordinary run-of-the-mill public school; she was apparently fed well and the hard tasks she would have to do in a village life were replaced by menial chores; Sharmila, it seems, could have a better future in Kathmandu than she would ever had in the village of Dang; and her mother who takes care of three other children had an extra source of income and did not have to worry about taking care of her elder daughter.

However, the parting words Shanta Hamal threw at us, made it clear she saw Sharmila, and anyone like her, as commodities that could be easily replaced and Shanta Hamal could easily feel good about herself for “helping” someone else. As we were walking to Ram Dwari’s home, she mentioned that the first year she had received Rs. 6000 for a year of Sharmila’s work, but two years since the family have been telling her they are “investing the money on making gold ornaments for Sharmila.” We asked Ram Dwari why she would not ask for Sharmila to be relieved of her work and be returned home, Ram Dwari replied she would do that when she came home during Teej this time!

It took a while before Indra Kumari Chaudhary, Sharmila’s younger 9 year old daughter, came back home from playing with friends. Indra Kumari herself had been sent to work as a Kamalari in a nearby village, but she returned in less than a week after she found the work too hard for age. We asked her if her sister talked to her about her time in Kathmandu when she came home. Indra Kumari did not say anything. We asked her if her sister had invited her to come to Kathmandu as she was enjoying her time over there, Indra Kumari replied that her sister had never invited her to Kathmandu and that she would not leave her home as she “like(s) it here”.