Last Wednesday, I headed out on the road with Mr. Hoai, an AEPD outreach worker, and a staff member to visit the ten families AP & AEPD are working with this year. I was ready to get started after hearing so much about them all. We headed first to Le Thuy District, located an hour away from Dong Hoi City. 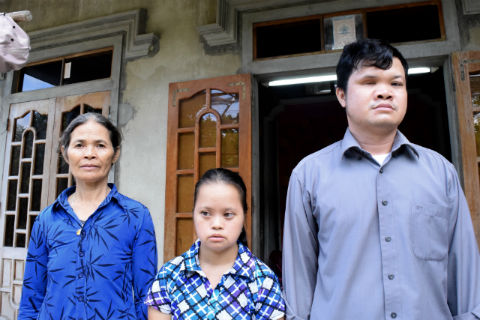 Mrs. Duong Thi An, daughter Hoa and son Huong. Their older brother, Hai, is also affected by Agent Orange. He was away when we came.

Huong was actually the first member of the family I met. He came with us on our drive to his home that morning, having just visited Mr. Hoai in Dong Hoi City. The story of chance meeting between Mr. Hoai and Huong is quite remarkable. They met 25 years ago at a hospital in Danang where Huong was going through his first eye surgery at the age of ten. Mr. Hoai was there recovering from his eye injury after serving in the Vietnamese Navy. Mr. Hoai recalled the story with great details, describing to me how he used to comfort the little child in his wing who was going through a similar procedure as him.

They would meet again in 2013 when Mr. Hoai accompanied some visitors to see Huong’s family, “I immediately recognized him,” Mr. Hoai exclaimed ecstatically, “I asked him right away if he was the child from the hospital in Danang all those years ago. It turned out he was!” It’s the special connections such as these that make the outreach workers an invaluable part to AEPD’s work. I could tell instantly that Huong was very much comforted by the presence of Mr. Hoai and highly respected him.

When we spoke with the family matriarch Mrs. Duong, she told us that their needs have stayed consistent from last year. They’re seeking support to purchase a buffalo and help pay for Huong’s second eye surgery. His remaining eye is only working at about 10% at the moment. I asked if there was anything else to be done for him and Mrs. Duong calmly responded, “I’ve told the doctors that I would like to donate an eye to my son. I’m old; he could use it more than me, but they said it wasn’t possible.”

It’s amazing how selfless and incredible mothers can be. I’ve been fortunate enough to meet some of the kindest this past week. By the time we left, I was fully recognizing how valuable AEPD’s team of outreach workers is to their operation and why AP & AEPD are focusing their campaign on caregivers. 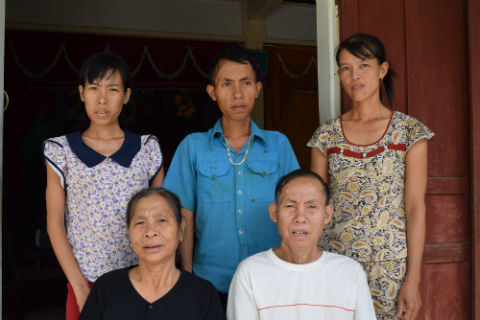 At the second location, I met Mrs. Le Thi Thuy & Mr. Nguyen Ngoc Tho. The couple has three children affected by Agent Orange. Their visit was actually one of the toughest for me to understand, because the family was proposing lots of different business ideas. Mr. Hoai was quick to help me reevaluate the situation, explaining why certain ideas such as a sugar cane juice shop or grocery store weren’t feasible given their location. After a long discussion under his guidance, raising a buffalo seems to make the most sense for their situation. 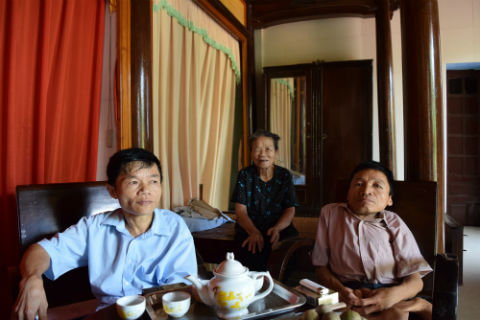 The Phan siblings are amazing in their own right. Mr. Hoai explained to me that despite not having gone to school, they’re some of the best planners and doers he has seen. The siblings take care of their aging mother, raise chickens, geese, pigeons and Mr. Danh also works as a hairdresser.

They’ve done well but truth of the matter is, they still represent the fact that persons with disabilities are more negatively impacted by changes in the climate and/or the economy compared to the average person. The two brothers explained to us that each year, come July, their house will flood up to about 1m (3.3 ft). One meter of water would reach past all of their heads. During this time, they’re forced to sell off their chickens at a loss because they can’t take care of them. Now, with the price of chickens falling, it no longer makes sense to expand their chicken business. They are seeking support to increase their pigeon raising business in the back yard. 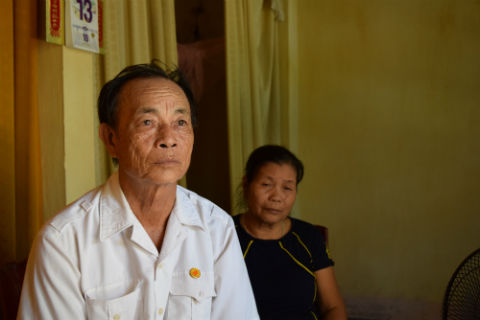 Over the course of their life, Mr. Dung and Mrs. Miec have had thirteen children, but only one of them ever survived. Their youngest daughter and sole survivor is Le Thi Ngoc Thuy. Thuy has a young daughter who’s about eight years old, her name is Thao. Both mother and child are affected by Agent Orange.

When we visited the family with a second outreach worker Mr. Luan, Thuy and Thao had gone to Hanoi to get her eyes examined. The young child’s eyesight is a source of concern for the family as it’s worsening and she will need eye surgery soon. Despite not having much, Mr. Dung and Mrs. Miec have taken in Mr. Dung’s nephew, who is wheelchair-bound and is believed to also have been affected by Agent Orange. This family is one of many in which not one or two, but three full generations have to deal with the devastating consequences of the poisonous dioxin. Click here to read their full profile.

The family is seeking support to purchase a buffalo and a sugar cane juice machine to start earning more of an income. Any additional amount fundraised will go towards helping them cover medical costs. 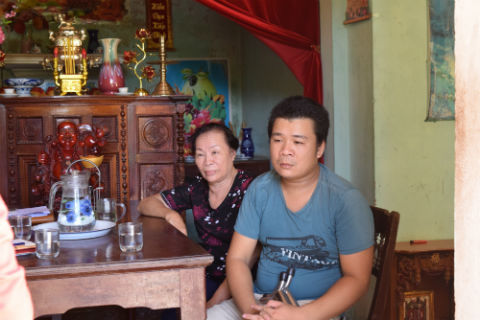 Here, I once again witnessed the trust that community members place in each outreach worker. We came to see Mrs. Hong and her son, Hung, an AO victim. His father left the family since he was quite little and Mrs. Hong has been raising her two children by herself ever since. During our time with the family, Mrs. Hong seemed quieter and more reserved. It wasn’t until we left that she pulled Mr. Luan to ask him if she could propose the idea of raising piglets. He assured me that he would help them figure out a business plan and assess the feasibility of their idea. 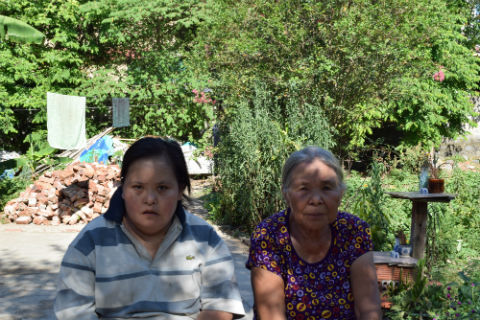 On our last stop, we visited Mrs. Nguyen Thi Chu’s home and found her working the garden. Mrs. Chu is older than some of the other moms we’ve met during our visit and she has three children affected by Agent Orange. She now relies on government support to cover living expenses. The family is currently going through quite a rough time as one of Mrs. Chu’s child is extremely sick. They’re expecting him to pass soon. We didn’t stay long since it didn’t feel quite right to intrude on the family during this time period. Mr. Luan will return to work with the family on their business plan at an appropriate date to help with the construction of a smaller room for Mrs. Chu and Loan to live in. Their current house is falling apart.

I wrapped up the day after six visits with a heavy heart, but I was slowly getting the hang of each visit and figuring out what questions must be asked in order to understand each family’s needs. Since some of the outreach workers were away on business, I was going to be visiting the last four families the next day without their company. More updates to come on my second day very soon…