Yesterday my colleague and I spent the day in the Jerusalem office, covering the phones and trying to find out as much information as possible about the 700 international activists participating in the Welcome to Palestine campaign. 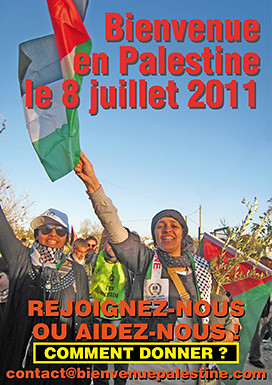 Visitors, volunteers, and activists wanting to get into the West Bank are obliged to lie about their activities while going through Israeli airport security or risk being questioned extensively or deported. It’s considered another form of the blockade on both Gaza and the West Bank, restricting the movements of goods and people not just between Israel and the oPt, but also within the oPt itself. In the West Bank it’s estimated that there are over 700 checkpoints and road blocks. Some of them are minor inconveniences while others like “The Container” checkpoint between Bethlehem and Ramallah are notoriously tedious.

The idea behind this campaign was to invite around 1000 internationals to visit the West Bank for 10 days to do a tour of the region, participate in educational activities, and learn more about nonviolent resistance in Palestine. The catch is that instead of lying while going through Israeli airport security, they would tell officials their true intentions: to visit Palestine.

At 4:00 in the morning, unable to sleep, I scanned my e-mail and found the first press release. Already Israeli authorities had sent blacklists to airlines, alerting them of those individuals who would be refused entry into Israel. Lufthansa, EasyJet, Malev, Alitalia and Air France subsequently prevented hundreds of European activists from boarding planes to Tel Aviv. Protests and demonstrations took place in airports and other locations across Europe. In Paris, the riot police were sent to quell the “uprising.”

Those activists who were able to board their planes met with quite a scene upon their arrival. At least two EasyJet flights from Rome and Geneva were surrounded immediately by Israeli airport security and special forces units. Suspected activists were removed from the plane and taken to a separate terminal for screening. One woman was reportedly violently arrested when she resisted.

At least six Israeli activists were arrested at Ben Gurion airport when crowds showed up to welcome and support activists. As of right now it’s difficult to say how many activists were able to get through. We know at least 6 have been deported while 65 more are sitting in detention centers. Hundreds more were prevented from boarding flights.

In spite of this and in spite of the fact that Israeli police are calling the Israeli response a success, it’s hard to see it as a campaign failure for activists. If Israel had simply let the activists through, they would have toured the region, returned home and that would have been the end of the story. Nobody would have cared to report it. As it is, I have to admit I am discontent with the apathetic coverage of this situation in U.S. media not to mention disappointed with the role the U.S. has taken in preventing the flotilla to Gaza from departing Greece. Department of State spokesperson Victoria Nuland urged those interested in helping Gaza to send humanitarian aid “through appropriate channels.” When asked which channels the U.S. deemed appropriate, she mentioned that Israel is now allowing more goods into Gaza and that the Rafah crossing into Egypt has been opened.

First off, the Rafah crossing is a passenger crossing. It’s not open for goods and despite Egypt’s promises, it’s barely open for passengers. Secondly, this has never been about humanitarian aid. The U.S. boat to Gaza, The Audacity of Hope, is not even carrying goods…only letters of support from the American people. This is about ending the blockade. It’s about ensuring that the Palestinian people are not caught in the cross-fire (political or otherwise) of Hamas and Western governments.

Israel has long touted itself as the only democracy in the region, but after a week of covering home demolitions, well demolitions, multiple arrest of minors, settler violence…and then witnessing the mass deportation of nonviolent activists, it’s hard to see it as such.

Some say, “Go home. This is not your concern.” But when I see empty bullet casings stamped with the words “Made in U.S.A,” I can’t help but feel that this is very much my concern.