Gail Morgado is an Advocacy Project Peace Fellow working this summer with the Women in Black Network from Serbia, an AP partner organization in Belgrade, Serbia. She has recently finished her first year in the MSFS program at Georgetown University where she is concentrating in foreign policy and international security. In 2004, Gail received her BA in political science and Spanish with a minor in Portuguese at Rutgers University in New Brunswick, NJ. She was awarded highest honors in political science for work as a Henry Rutgers Thesis Scholar researching Cuban-American relations and its influence in a transitional post-Castro regime. Selected as a Rotary Ambassadorial Scholar to Portugal, Gail served as an "ambassador of goodwill" from 2004-05 and earned a post-graduate diploma in European studies that specialized in the political economics of Euro integration and community law of the European Union. Here, she also organized fundraisers and community activities, which helped to raise AIDS awareness and to increase national literacy and educational standards in Portugal. Gail is working with Women in Black, a women`s feminist - anti-militarist peace organization that has been advocating against militarism, nationalism, war, sexism, and all forms of hatred, discrimination and violence since 1991. Gail will be working with this courageous group of women to further their mission of peace and justice in a post-conflict society.


For Justice, against War

Women in Black, Belgrade sponsors eight to ten weekend conferences and seminars a year aimed to unite women from all over Serbia in the fight against all forms of violence and abuse of power.

This weekend’s conference aimed to inform and encourage activism against the abuses of clericalism and fundamentalism in Serbia. “Knowledge is power” as the old saying goes. It’s important for all women, especially in the more isolated rural areas, to know that they are not alone in their struggle for empowerment.

The workshops consisted of lectures and group activities that included brainstorming sessions providing each woman with an opportunity to share her thoughts on various topics. Poster board, or as Serbians say, “flip charts,” are used to record and summarize all that is said. When the posters are all hung up on the walls, participants are able to read and talk about the ideas mentioned in each small group discussion.

During one workshop, Latinka Peroviæ, a well-known historian in Serbia, spoke about the role of politics and religion in Serbian history since the beginning of the twentieth century. Speaking freely in an audience of female activists, she said, “Serbia has to acknowledge what it has done. The moral process has to happen! We’re living in a state of lies, and without the truth, we cannot develop. Without acknowledging our past mistakes, we cannot make any steps forward.”

It’s really amazing to me how controversial this statement sounds to some people. Although it sounds completely rational to me, many people in Serbia would completely disagree with it. They would say that the Yugoslav wars of the 1990’s were just that — wars. According to them, Serbia was no more aggressive than its other Balkan counterparts. They believe themselves to be the real victims in this story. “The Hague, the Special Court on War Crimes, NGO’s advocating human rights and transitional justice—these are just institutions imposed by the West to persecute Serbians” they would say.

What about the Srebenica massacre in which 8,000 Muslim men and boys were killed when Serb forces took over the town on July 11, 1995? This was the largest mass murder in Europe since WWII. Why hasn’t the Serbian government officially apologized for this? Why hasn’t it handed over the tribunal’s most wanted fugitive General Ratko Mladic?

I’ve been told that Women in Black in Belgrade, like other local NGO’s here, have a bad reputation in Serbia. Because they are anti-nationalist, and accept the blame for crimes committed in their name, they are disliked. They have organized close to 700 peaceful actions on the street (protests, performances, campaigns…) Everything that they do is for peace, not war. Instead of support from their people, they receive death threats, bomb threats, and intimidation of all kinds. And yet, they persevere in their mission for peace and for justice. When kicked down, they pick themselves up, and tell people about it. Women in Black empowers women (and men) to do something, anything – against the evils of hate and injustice.

Now, this is a lesson we can all learn from…

Staŝa, the director of Women in Black, Belgrade speaks of the evils caused by fundamentalism in a WIB conference in eastern Serbia (Bôr) on July 1, 2007. 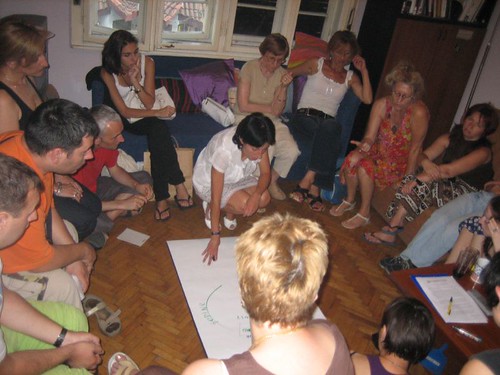