I think it has finally hit me that I’m moving to Bosnia for six months in only a matter of days.  I’ve spent some time with my mother in New Jersey, where she lives, and now I am returning to Washington DC for the Advocacy Project’s Peace Fellow training.  This time I come to DC as a visitor though, after two years of residency.  It’s surreal, to say the least. 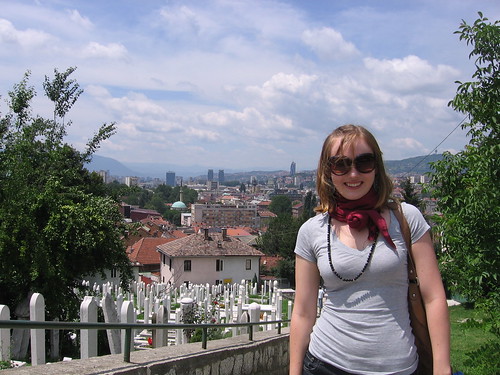 However confused my mind is about the coming weeks of transition, I am excited, energized, and just a little nervous about working with BOSFAM in Tuzla.  BOSFAM, founded during the war, is an community-based organization aimed at providing emotional and financial support to women displaced during the cleansing and genocide through the weaving of traditional Bosnian carpets.

To some extent I know what to expect from Bosnia on a superficial level.  I’ve spent a total of two months in Bosnia and Herzegovina over the past three summers – summer which have affected my world view and permanently ingrained a sort of ‘calling’ to work in the field of conflict resolution.  I can’t wait to get back to the country of green mountains, river-filled valleys, and villages with mosques, orthodox cathedrals, and catholic cathedrals dotting the horizon.  I’m excited to eat cheese filled-pastry called sirnica and mushrooms picked locally.

On the other hand, two months is not enough time to really get to know a place.  I assume this will ring painfully true as I start my long journey to learn the Bosnian language.  So far I’ve had a class here or there, and a helpful book I picked up during my last trip to Sarajevo.  I know how to say critical phrases like “I need food/sleep/coffee” or “Where is the bus to Tuzla?”  Any more than that however, and I become lost in a whirl of consonants mashed together in a way that often confounds English-speakers.  Everyone says I’ll make leaps and bounds with the language once I am immersed in it, and at this point the only thing to do is hope they are right! Despite that very daunting challenge, I continue to grow excited to meet BOSFAM’s founder, Beba Hadzic, and the other weavers.  All who have come into contact with Beba and the other women comment on their strength and energy, and I look forward to diving in and engaging with them during my fellowship.

Right now, I feel very blessed to be going on such an incredible adventure.  I had seen the organization’s quilts when I had visited Srebrenica for the annual burial and memorial for the 8,000 men and boys killed starting July 11, 1995 in this UN “safe zone.”  I never imagined that I would have the opportunity to be a part of that work, and make a modest contribution to rebuilding Srebrenica after the horrendous war-time trauma.  This week, as I pack my last bags and check to see that my ticket reservations and passport are in my carry-on, I’ll have a bittersweet moment to contemplate: goodbye to my home, job, and friends in DC, and zdravo to my fellowship and all it may entail.