How stigma has manifested among Liberian Ebola Survivors, and what the emergence of covid-19 means for them

Five years after the Ebola crisis in Liberia, and when attention to Ebola survivors began to fade in 2020, covid-19 emerged. The coronavirus crisis has reignited community apprehension against Ebola survivors, and even among Ebola survivors themselves, as Leaders of the National Ebola Survivors Network of Liberia have told me in recent weeks. 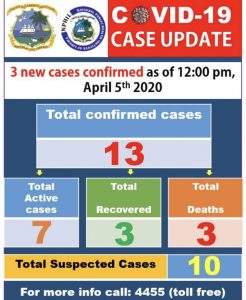 Postcard on covid-19 cases during the start of the pandemic (Liberia, 2020; Photocredit: NPHIL, MOH-RL)

At the start of Liberia’s bout with covid-19 in 2020, myths that were once used to stigmatize survivors were resurrected. Survivors began stigmatizing themselves given their apprehension about another pandemic, covid-19, coincidentally, 5years after Liberia’s Ebola crisis.

Survivors, as the leaders have indicated to me, believe that the crisis had “come for them.” Others speculated that 2020 was the “apocalypse”-the five years maximum life span predicted for survivors after their EVD experience. 2020 was five years since 2015 when Liberia had her first Ebola Free Declaration.

The tag of “five years life span” features prominently among the many stigmatizing experiences that Ebola survivors have faced since their return from the Ebola Treatment Unit. Leaders tell me the tag is used to brush off Ebola survivors as being less than “normal” human beings, with “visible fragilities who would soon disappear;” hence the “normal” will not have to put up with them for a long time.

As covid-19 broke out, communities speculated in two directions: one, the apocalypse had dawned, and survivors would no longer pose threats to them. It has already been five year and time had come for the “end” of survivors; and two, survivors were possible carriers of, and vulnerable to the coronavirus; reinforcing the stigma, isolation, and scorn that survivors faced during the Ebola crisis.

Survivors themselves have concerns about covid-19. They face medical complications like memory loss, body pains and battered immune systems. While, I have not read in the relevant literature that survivors have weaker immune systems, we can speculate that, due to the many health issues survivors report being faced with, at present and the effects of Ebola on their general health, Ebola survivors could be classified as people with pre-existing conditions or “vulnerable” immune systems; the kind of people who have had difficult experiences with covid-19.

While we have not, at yet, learned about an Ebola survivor who has tested positive for covid-19, survivors have anxieties about what the possible effects of contracting covid-19 would mean for them. This anxiety increased among survivors, as the Survivor Network’s Leaders have told me, when covid-19 was reported in Liberia.

The leaders took to local radio stations, as they said, to dispel the myth that covid-19 had meant the apocalypse for survivors, or that survivors were possible carriers of, or vulnerable to covid-19. The leaders also promoted preventive messages as the National covid-19 Response Team did, encouraging survivors to follow the health protocols to keep themselves and their families safe.

Due to the memory loss complication that has been reported widely among Ebola survivors, they are sarcastically referred to as people with small brain capacity, measured in “megabytes” rather than “gigabytes.”

By megabyte, leaders say to me, survivors are described as people whose brain cannot bear the workload of “normal” human beings. “Normal” human beings have brain capacities measured in gigabytes and can bear more load, as the sarcasm goes.

This sort of stigma has been reported widely among survivors who suffer constant forgetfulness. While memory loss is an issue, as we have learned, to all survivors, those who have spoken to me so far, report that they abnormally forget things since their return from the Ebola Treatment Unit, eliciting the “small brain” stigma.

Fear of contamination also led to community overreactions against survivors. Survivors have been literally “community untouchables.” They could not transact business or interact in the community. Community merchants refused money from survivors; including persons living in the households of survivors who themselves had not tested positive for the Ebola virus.

Children of survivors and child survivors were not allowed to play with other children. Young adults, some of whom reported that they were attending high school and colleges faced isolation from their peers. Three of the young adults, all women, I have spoken to so far, dropped out of school and have since not returned; first, for the stigma they faced in the immediate aftermath of the crisis and then, for economic reasons occasioned by the crisis.

Covid-19 now becomes the enlivening of the threats, real or perceived, that Ebola survivors face. Whether they would survive if they contracted covid-19 in the same way they victoriously overcame Ebola is a lingering concern among survivors. Is covid-19, the predicted apocalypse that would mean the “extermination” of survivors?

In 2020 and 2021, as the leaders have told me, news about the death of a survivor renews the anxiety among survivors: “Is it really true that we will live for only five years post-Ebola?” Such anxiety will continue to linger as long as the crisis drags on; and the covid-19 test of the resilience of Ebola survivors will come if and when, unfortunately, an Ebola survivor contracts covid-19. An experience, Ebola survivors are not wishing, and for which, as I have observed over the last several weeks, they have been responsive to the covid-19 preventive messaging and measures.

Self-stigma is an ever-present reality for Ebola survivors, and covid-19 in 2020 and 2021, five years after Ebola, only reinforces that.