At the age of 11, what would you write if you were asked to tell your life story? You’re young enough to remember very early childhood but not old enough to know that your lifestyle may be different from how others live, and therefore unique. For the past couple weeks, the KCE girls have filled the room with the fragrance of fruit-scented markers as they fervently draw their personal stories.

Other than the occasional giggle, soft jazz and classical tunes set a tranquil mood for these young artists to express themselves.

For the past two weeks, I’ve been facilitating art workshops to 32 students from class 6, ages 11 to 13 years old. I’ve specifically designed the workshops so that the girls have a safe space to talk about their lives and celebrate the un-harmful aspects of Maasai culture.

Several girls drew themselves being taught how to milk cows. Netaya drew her mother teaching her how to cook. Naomi drew her dream to build a hospital. 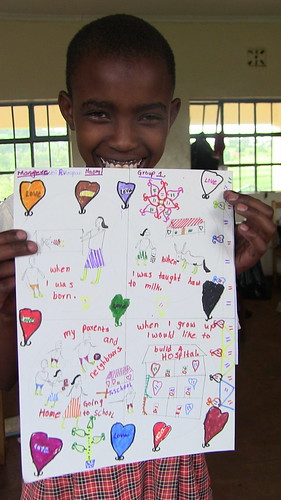 I begin the exercise by asking the girls to shout out specific memories, life obstacles, life lessons, and the responsibilities expected of them. “Just shout them out,” I say as I write them in lime green on the chalkboard. “Milking cows…beading…taking care of my sisters and brothers, learning how to cook, collecting firewood…helping my mom clean…going to school…taking the cows to graze…” We continued like this until the entire board was covered in notes.

As I peered over shoulders in the writing session, I saw the following:

“I was taught in Enkakenya how to protect myself and my life. I was taught to say no to F.G.M., parents who circumsise girls are [being caught]. I was taught about early marriages girls are not supposed to be marriage early,” Christine, 12 yrs old wrote in her autobiography.

Damaris, 11 yrs old wrote, “I told my mother that F.G.M. is not good circumcision she told me I will be circumcised you I told her that girls “say no to F.G.M.” they taught us in camp.” 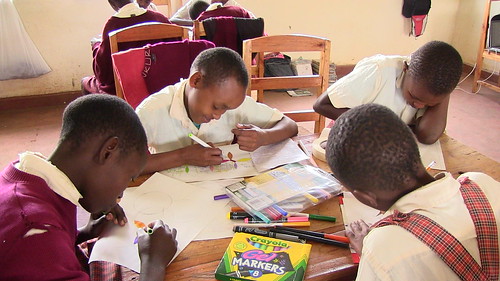 Many of the girls’ stories focused on saying no to FGM to their parents. Typically when a girl reaches adolescence she is expected to undergo circumcision in preparation for marriage. Saying no to FGM is a very bold move and a few years ago was typically unheard of in Maasai culture. However, as the KCE girls have expressed, finding the ability to say no to a deeply embedded cultural practice, such as FGM, is working to dislodge the notion that culture can’t be changed. Through their writings and drawings the girls have expressed their desire to change this paradigm within the community.

In addition, many of their stories highlight the importance of learning how to milk cows, cook, bead, and look after their siblings while their mothers are taking care of the shamba (garden). 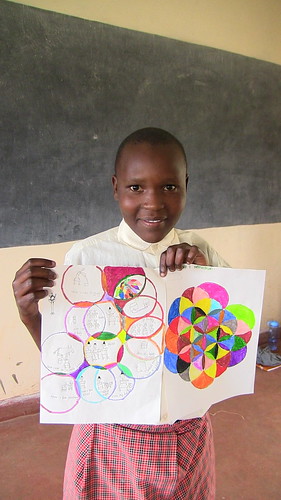 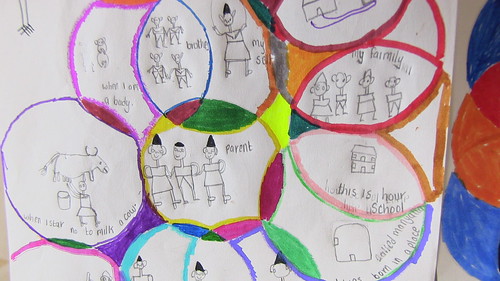 “I like milking because it is a Maasai culture. Very early in the morning I wake up and go to the homestead of the cows and start milking,” Nasieku , 13 yrs old wrote.

Naserian, 13 yrs old wrote, “I learn to bead in the age of eleven years. In every bead I make I put a white colour, because in our country a white colour means peace. Also because my name is peace in our culture.”

All girls have learned very early on that FGM, early-marriage, and taking over their mother’s roles, as caretakers of the children and home, are respected within Maasai culture. Through the convergence of art and writing in the KCE curriculum, the girls have become stronger communicators, more able to narrow down their personal goals and better express their emotions. In addition, they are better able to articulate relevant memories that they may otherwise not feel comfortable sharing. To an outsider the girls may appear very shy, but in art class they make up a collage of strong young women who are working to create their own destinies.