International Cooperation for Human Rights and Peru’s Fight Against Impunity

In 1985, while serving as a second lieutenant in the Peruvian Army, Telmo Hurtado ordered soldiers under his command to gather and kill 62 unarmed villagers, including 23 children, from the remote Ayacuchan community of Accomarca. After torturing the men and sexually abusing the women, the military locked the villagers into various houses, shot at them and set fire to the houses. They then threw grenades at the houses to destroy them entirely.

When news of the massacre spread and an investigation was undertaken, Hurtado personally led back a group of soldiers and proceeded to kill seven additional people who either witnessed or survived the initial crime. Nevertheless, weeks after the massacre, he openly admitted responsibility for it in front of the investigating commission. He justified the execution of children with the assetrtion that they were terrorists.

What followed is a classic case of Peruvian-style impunity. Hurtado was absolved of the charge of qualified homicide in 1993 by a Peruvian military council, and was sentenced to a mere six years in prison for abuse of authority; a sentence he never served. Rather, he rose in the ranks of the military, and was decorated during the government of Alberto Fujimori.

In 1995, he benefited from Fujimori’s controversial law that granted amnesty covering all human rights violations committed by state forces, and remained in active service of the military. In 2002, after the amnesty law was annulled following a ruling of the Inter-American Court of Human Rights and the possibility of a new trial for the Accomarca case was renewed, Hurtado fled to the United States.

The Accomarca case was finally brought to court in 2010, 25 years after the events. Hurtado is one of the 29 accused in the case, consisting of military of all ranks. He was apprehended in Miami in 2007 and prosecuted on criminal charges related to visa fraud and making false statements. His arrest was part of a program to detain and deport torture suspects from abroad that are found in the United States.

In 2008, Peru requested his extradition on criminal charges of murder, abduction and forced disappearances. Following a long judicial process, Hurtado was finally extradited back to Peru a few months ago to face justice. He is currently facing a maximum sentence of 25 years of prison.

International cooperation was also instrumental in the arrest and sentencing of ex-President Alberto Fujimori for human rights violations. The latter fled to Japan in 2000 when corruption scandals led the Peruvian Congress to relieve him of his functions. 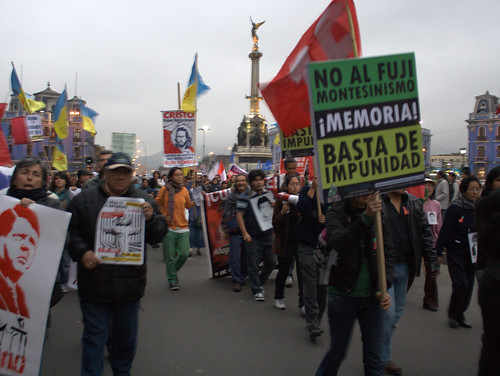 A review of the Fujimori administration led to Congress authorizing charges against him in 2001. Upon demand of Peruvian authorities, Interpol issued an arrest order on charges that included murder, kidnapping, and crimes against humanity. A request for his extradition was also submitted by the Peruvian government to Japan in 2003, but Japan proved unwilling to accede to the request.

In 2005, Fujimori was finally arrested and detained in Chile on order of a Minister of the Supreme Court following a request by the Peruvian embassy. Two years later, the ex–President was extradited to Peru to face various accusations. That same year, the trial for his role in killings and kidnappings by the Grupo Colina death squad during his administration began.

The cases of Telmo Hurtado and Alberto Fujimori have much in common. Both tried to evade Peruvian justice by fleeing to other countries, and both ended up being extradited back to Peru to face the charges against them. Yet for every extradition, there are countless violators of human rights living comfortably in foreign countries. International cooperation and legally-binding international human rights instruments can play a crucial role in remedying the situation.

One such instrument is the UN’s 2006 International Convention for the Protection of All Persons from Enforced Disappearance. Thus far, 88 states have signed the convention and 29 have ratified it. In South America; Peru, Guyana and Suriname are the only countries that have yet to sign.

In a meeting between state representatives, civil society actors and victim’s representatives last September 5th, which included EPAF members, Second Vice-President Omar Chehade pledged that his government would finally sign the Convention and that is would support initiatives dealing with the issue of enforced disappearance.

This is of crucial importance, as it is the first time that Peru officially recognizes the importance of the issue of enforced disappearance. The symbolism of the Convention would do much to re-ignite hope among the relatives of Peru’s 15,000 disappeared, many of whom have been disheartened by five years of an administration that has been completely unresponsive to the issue.

Let’s all hope that the new government keeps its word.

(On a side note, neither the United States nor Canada have signed the Convention.)