Mrs. Mai Thi Loi left quite an impression on me the last time we met. I will always remember standing next to her by the doorway as she gripped my hands, her voice breaking, sentences truncated by sobs. I had felt hopeless then, unsure of how/what I could do to help her. Mr. Hoc, an AEPD outreach worker responsible for the family, had gone back to visit Mrs. Loi after I left. He made the three-hour trip via a motorbike through the winding, hilly streets of a rural Vietnam province. This is no easy feat. Mr. Hoc worked with the family to figure out how best to supplement their income so that Mrs. Loi can care for her three sick sons and aging father. After speaking with her extended family, they decided to settle on the support model of raising a buffalo to work the piece of land that she still has and produce calves.

On a good day (i.e. not too sunny), her youngest son, Hung, can still help out and care for the animal. On bad days, he often wanders the neighborhood aimless and falls into angry fits. Mrs. Loi will either do most of the work herself or she will rely on the assistance of her extended family living next door. When Mr. Hoc and I got to meet with her, representatives of the local commune government and self-help club for persons with disabilities were present. Formal documents entrusting the buffalo to Mrs. Loi were signed and we took photos with the family. Mrs. Loi proudly led us to a patch of land where the cage is located. Hung was feeling well that day so he took charge in leading the animal over for our photo. It’s a huge relief to see he’s feeling a little better. 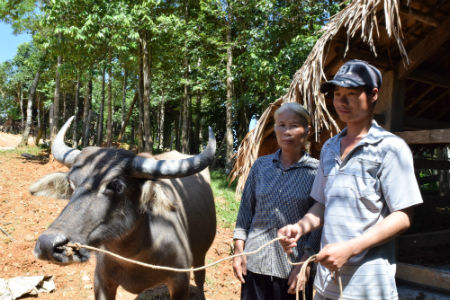 While I’m very happy to see Mrs. Loi’s family receive much needed support and assistance (Thank you kind donors!), I would like to emphasize that this isn’t a triumphant story of success. This is an ongoing story of trying to make the best out of a very difficult situation. I am hopeful the buffalo will give her a way to work the land she still has and supplement her income to care for three ailing sons. The animal is also a symbol of optimism and kindness, so Mrs. Loi can feel like she isn’t alone in this world and understand that people were moved by her story. However, this is a minuscule piece of the puzzle for Agent Orange isn’t an issue that can be so simply resolved. So much more funding is still needed. There are a great number of families just like Mrs. Loi’s in Vietnam, living on less than a few dollars a day in heartbreaking conditions. They are all equally deserving of our love and support.

On that day, I also accompanied Mr. Hoc to meet two more families affected by Agent Orange. Mr. Hoc explained to me that it’s been quite difficult to make it out to see these new families since they’re so far away and transportation is costly. The families all live in hidden, isolated corners of the commune so without the help of a representative from the self-help club, we would not have made it out to see them. From Mrs. Loi’s home, we drove for another 20km to the home of Nguyen Ngoc Thin and Cao Thi Loan. The couple had a total of five children. Three have passed away, as recently as the beginning of this year. The last two are pictured here. 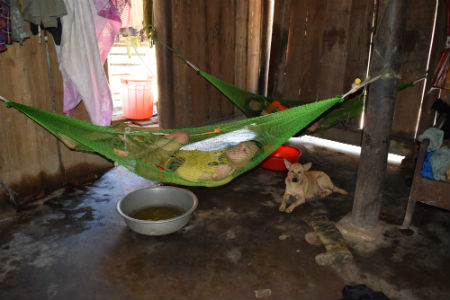 Their youngest is named “Phận”, which translates to “fate”. His name seems to reveal a lot about the mindset of his parents, who are living through incredibly difficult times, dealing with conditions brought on by forces entirely outside of their control. As Mrs. Loan sat and stared at us through the entire conversation, never saying a word, I couldn’t help but notice how tired and exhausted she must feel, resigned to her fate. Her husband, Mr. Thin, was more dynamic. He explained to us that that he became a soldier in 1984, living in areas that were once sprayed with tons of the pesticide. They currently earn a living through farming, but they make nowhere near enough to support themselves. Their house is falling apart and floods each stormy season.

Next, we arrived at the house of Mr. Dinh Hu Duong and Mrs. Nguyen Thi Binh. They have a total of ten children, five were affected by Agent Orange. They currently now have two living children who are unaffected and two (pictured here) who are Agent Orange victims. Similarly to the last family we met, Mr. Duong and Mrs. Binh both make a living through farming and working odd jobs. Mrs. Duong would like to further supplement their income by raising a pair of pigs and a cow. One of the constants that we see with each Agent Orange family is this double burden of making ends meet and caregiving that parents or other guardians must take on. 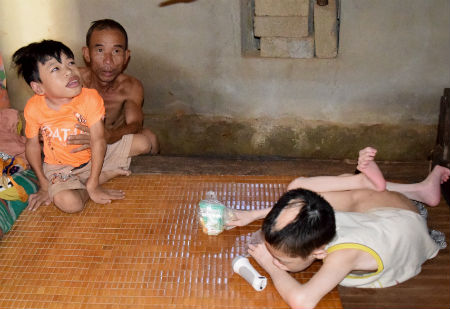 Often times, one person has to be home 24/7 to care for their disabled children or grandchildren, which places a financial strain on the family. We left both households with a heavy heart, but grateful that we were able to pay them a visit and do a quick assessment of their needs. Given their difficult-to-reach locations, they receive less support than families living in bigger, more developed communes. With our limited funding, we weren’t able to promise these two families money or immediate support, but we did promise to share their stories and photos. So here they are, thank you for reading.