Standing in the middle of a street in Tel Aviv, people are pushing from all sides. Above me I can see signs being jostled against the backdrop of streetlights. People are hanging from balconies, standing on roofs, leaning out of bars. The heat is almost unbearable as bodies crush against each other in one of the largest protests ever to grace the streets of Tel Aviv. 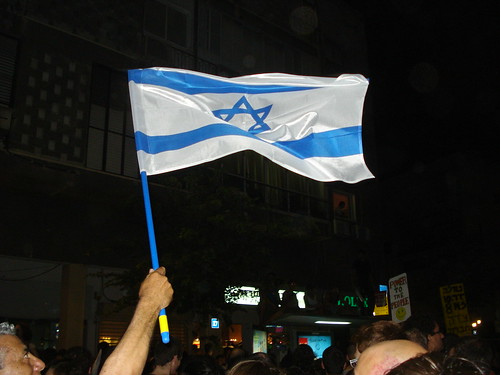 The night previously my colleague and I had crammed ourselves into the back of a sherut (shared taxi) in search of Rothschild Boulevard and the protesters camped out on its street, challenging Netanyahu to return Israel to its origins as a welfare state.

“I think this is it,” I say, nudging my colleague who is gazing down at her notebook, writing a few details down.

Directing her attention to the hundreds of tents lining the street, I nod. “Yeah. I’m pretty sure.”

Standing for a moment before a massive Israeli flag draped in front of a building –three teardrops cut out below the iconic blue Star of David–, we turn to look at each other.

My colleague is from Argentina. I am from the U.S. Neither one of us is a stranger to massive street protests, but this sort of thing you just don’t see in Israel. Israelis simply don’t have a history of protest. In fact, the first major anti-war protest wasn’t held until the 1980’s.

So to see thousands of people milling about a normally quiet Tel Aviv street with signs demanding “Power to the People,” “Real Democracy Now,” “End Americanization,” “Tear Down the Wall” is shocking. It takes my breath away to see it and as we traipse up and down the median of the Boulevard in search of a place to set up our tent, we meet with a microcosm of Israeli society. 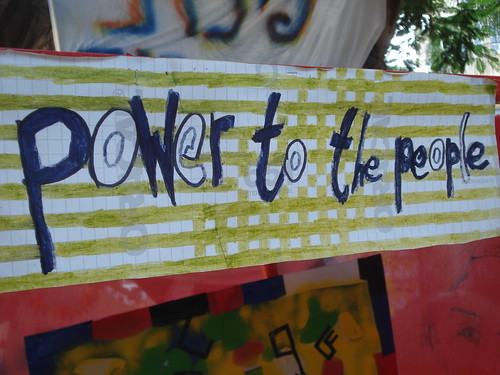 Families welcome Shabbat, bands blare music, children play under the watchful eyes of their parents, barefoot students lounge on cast-off couches strewn about the camps. As we push our way through the crowd, people are handing out flyers, food is being served, and every where excited voices ricochet off of a tangible assurance of imminent change.

In a bit of a daze, we unpack our tent, rolling it out onto the grass as we try to prevent the tent poles from sticking out into the street where traffic rolls through, occasionally slowing down to gaze at the spectacle. A woman who speaks no English comes to help us set up our tent. Finally she sits back to watch, occasionally pantomiming useful information about where we can find water or go to the restroom. 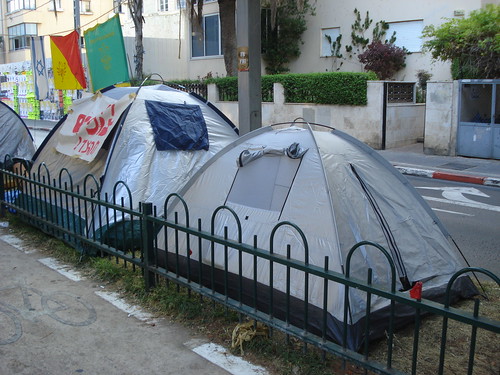 With the tent set up, we wander the Boulevard. One camp is screening a film on veganism and animals rights. There are plants growing from plastic bottles hanging from trees. My colleague nudges me forward. Another group is watching a documentary on the Black Panthers. Signs hang everywhere. “Social Justice Now” “Revolution of Consciousness” “Bibi (nickname for Netanyahu) go home.”

One group of tents displays photographs of Palestinian home demolitions with signs demanding social justice for all. Just down the street, settlers hand out flyers encouraging those who can’t find housing to move to the settlements in the West Bank where housing is cheap and abundant.

The magnitude of Israelis gathered to demand social justice is overwhelming, but it becomes rapidly clear that the definition of social justice and what exactly it means for the wide scope of political and social interests here remains to be seen. Already questions are being asked about where Palestinians fit into the Israeli population’s demand for social justice, but all anyone can seem to agree on at the moment is that something needs to change.

Rothschild Boulevard seems like more of a party when contrasted with the severity of the situation in Jerusalem, where groups of single mothers, calling themselves the “No Choice Group,” watch out over their children playing in Independence Park directly across from the U.S. consulate. Many of them have been on the list for public housing for over five years and for a few of them, this is not their first time in a tent. One woman describes spending three months in a tent during the rainy season after she was evicted from her apartment. She works 80 hours a month and is unable to meet her basic needs or those of her children. 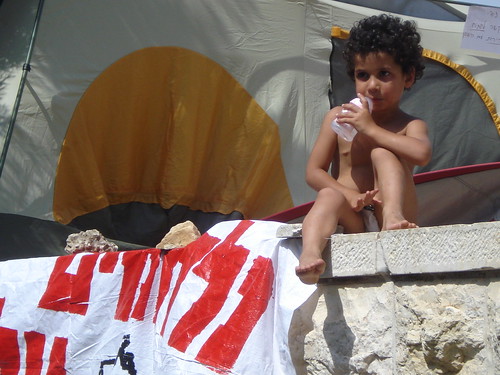 Sitting on Rothschild Boulevard watching people meander among the tents, a few individuals stop to ask us where we’re from, but only one man asks us why we’re here camped out in the middle of an Israeli protest if we don’t live in Israel. As we toss and turn on the hard ground, fighting the humidity and the blaring bands at 4:00 a.m. in the morning,  we’re asking ourselves the same thing. The next evening it becomes clear.

Thronged by people screaming for change in a country where Netanyahu said there would never be protests, something inside of me is deeply touched.  To be witness to one of the largest and most dramatic protests ever to sweep Israel is a powerful moment. As I watch soldiers leaning against building walls while Israeli citizens clap their hands and push each other forward, I am surprised to find myself choking back a few tears. It’s hard to stand there and not imagine the day when a protest of that magnitude stands in the street demanding the end of the occupation. Overly optimistic, yes. But I believe that change will come when Israeli citizens demand it and I haven’t given up on them yet.