A week ago, les femmes du Marché Sandaga were still mysterious and foreign to me. Though Helah and I had partaken in a major meeting between UCOMAS (l’Union des Commerçantes du Marché Sandaga) and STRATEGIES! –a local management organization spear-headed by Kah Walla, a Vital Voices alumni– this week, our work with the women traders became close and personnel characterized by laughs and tears, tales of heartaches and successes. 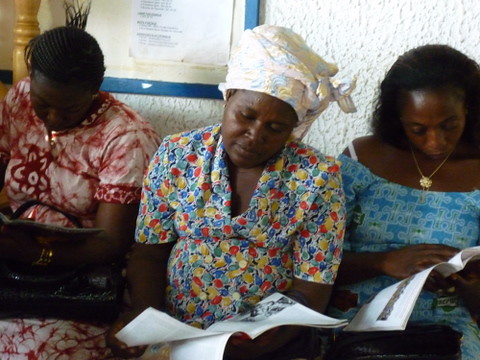 Witnessing the meeting between UCOMAS and STRATEGIES! was nonetheless extremely revealing: though Ms. Kah Walla played a decisive role in terms of guiding the discussions and reframing the issues at times, the women traders know what they want and have defined very specific objectives for the betterment of women’s condition at the Sandaga market. During the meeting, each one of them stood up and shared their ideas about UCOMAS membership; funds to ensure that women have a small pension once they are no longer able to come to the market due to old age or in the case of illness; and the possible creation of a microfinance initiative to ensure an easier access to credit for women traders. I cannot fully convey the responsibility upon us to ensure that this very nascent organization moves forward. I am also humbled by the women traders’ courage and perseverance to embark on this adventure and challenge the status quo.

Thanks to the incredible legwork carried out by the AMA Women Project, the latter being essentially embodied by Eric and Annick who are two unbelievably knowledgeable and committed young Cameroonians, Helah and I have been able to start building the trust necessary to conduct our project in Douala. Our work with the AMA Women project consists of three main pillars: create a brochure and launch a Google site on behalf of UCOMAS, produce a short documentary about the situation of women traders in the Sandaga market, and carry out ICT trainings in order to ensure that the women traders will be able to maintain the communication tools we are setting up once we leave.

So what does being a woman trader at the Sandaga market involve you might wonder? Well, if you or I were a woman trader at Sandaga, we would most likely wake up at 4am every day except perhaps Sundays; wash ourselves with or without running water; prepare the food for our husband and children and quickly head to the market. There, we would have to rush towards farmers’ makeshift trucks, which made their way to the market earlier in the day from the surrounding rural areas. Here, among all the other women and men traders, the struggle to get a fair price would begin. Because you and I are women, we are most likely going to pay a higher price for a basket of tomatoes in comparison to the men. Because you and I are women we are most likely going to be insulted, pushed aside and possibly brutalized. After having acquired the fruits and vegetables necessary for our sales, you might be lucky enough to have a small wooden stand were you will be able to organize your goods neatly. I, in contrast, will be sitting on the floor where I will have laid out my merchandise on a carpet surrounded by dust and trash. Rain or shine, you and I are both going to be here at the Sandaga market hoping that we will be able to sell all the merchandises we acquired in the morning. Because there are no fridges, my left-over tomatoes and your left-over papayas will be lost. Around 6pm, we will be heading home in order to prepare the food for our respective families before finally being able to rest.

This window into the world of the women traders does not fully do justice to the constant struggle women traders endure. Eric always says: “quand les femmes arrivent au marché, elles entrent au front” (once the women enter the market, they enter a battle field). Not only must women traders constantly be on the lookout for the acquisition and the protection of their goods, women traders have to carry out their activities in a climate of insecurity due to the presence of street children roaming Sandaga, themselves desperately hoping to acquire enough food to make it to the next day. Though unconceivable for us, women traders do not have access to bathrooms and as they themselves simply explain “nous ne pouvons pas nous mettre à l’aise” (we can’t put ourselves at ease). Fortunately today, UCOMAS members are ready to take on those challenges. In the past, a man could chase a woman through simple intimidation; today, the women traders are working tirelessly to ensure that their cause is heard and acted upon locally and that the rest of the women traders in the Sandaga market are given the opportunity to carry out their businesses in dignity. 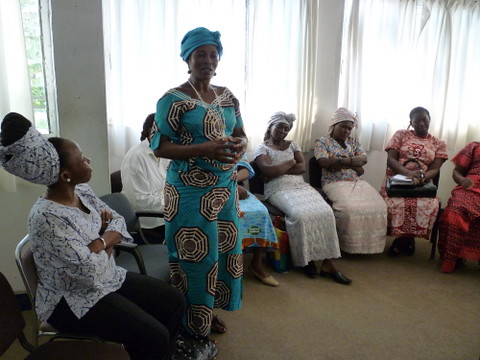 According to official statistics from the United Nations Millennium Development Goals, there are currently 27, 5% of the total population living on $1.25 a day in Cameroon. Based on simple observations as well as exchanges with our colleagues at AMA Women project, the accuracy of this data is questionable. In fact, the extreme levels of poverty that I have witnessed here in Douala get deep under my skin. Last week in the later part of the afternoon, a little girl with a washed-out and ripped dress was trying to sell cola nuts at the Sandaga market while walking barefoot in a mish mash of mud, urine and rotten fruits. Just by walking on boulevard de la Liberté, which is one of Douala’s central artery, clusters of unemployed young men congregate at almost every street corner. Because there is such unemployment among young men, women are forced to step up in order to provide for their families. Various organizations, both local and international, now recognize that investing in women not only benefits their children but can contribute to the advancement of the community as a whole. 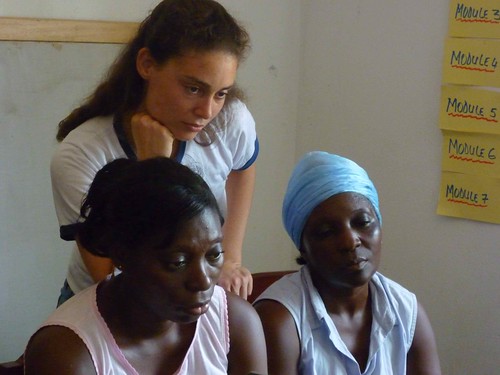