Have you ever met someone for the first time but felt like you’ve met them before, and will meet them again in the future? I’ve never felt that until I met Mama CPI in Logorate, Samburu County a few weeks ago. 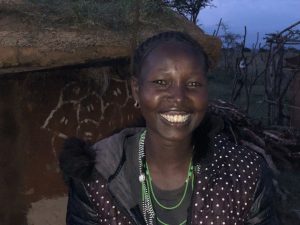 The CPI Kenya team and I arrived at the home of Evelyn Lengapiyani as dusk started to fall, but Evelyn wasn’t there. One of her sons ran to get her in the cornfields, and as we waited in front of her traditional Samburu house I gazed out at the beautiful rolling hills with the gentle sun casting its last light onto the tall green and yellow grasses. “Gosh, Samburu County is beautiful,” I thought to myself for about the hundredth time that day. After about 15 minutes Evelyn arrived and immediately invited us into her home. 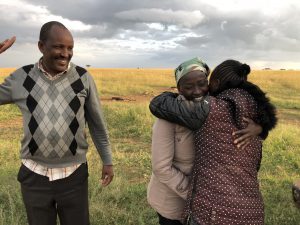 Mama CPI warmly welcoming Hilary (left) and Caroline (center). You can see the beautiful land on which Mama CPI lives in the background

Full disclosure, I am not an impartial reporter when it comes to Evelyn. She is one of those people that you just instantly like. Her hugs are warm, her smiles are authentic, and despite her knowing little English and me little Kiswahili, we understood each other. She’s affectionately called “Mama CPI” by the CPI Kenya team members because she is such a big supporter of their work and has been such an advocate for peace in her Samburu community. Last year CPI Kenya held a peace conference in Nairobi and brought two Samburu and two Pokot parents to the conference to speak about the impact of peace on their communities, and Mama CPI was one of the Samburu’s they invited. She is well spoken, passionate, and genuinely kind (again, I am super biased. But in my defense, I think everyone would agree with me if they met her). 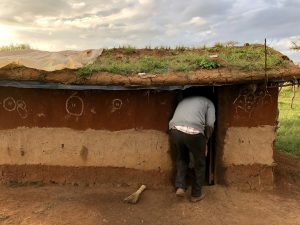 We settled in her traditional Samburu home (low thatched roof, mud walls, dirt floor, no power or water, and smoky air) and began our interview with her. I began by asking her the same standard questions we had been asking all the families who received a Heifer for Peace, but could tell right away that she was incredibly intelligent and a voice of the village, so we went deeper.

“Why did CPI Kenya’s peacebuilding efforts work, while so many other approaches failed?” I asked Mama CPI. Immediately she responded “Even in families, children are a source of peace. I love my kids, and the Pokot love theirs. The children brought us together.” She also brought up a very interesting point that people outside of the communities would have never known. She told us how there is “a lot of movement between the children”, which also prevents conflict because no thieves will attack a village if they aren’t sure whether there are kids from their tribe in that village or not. 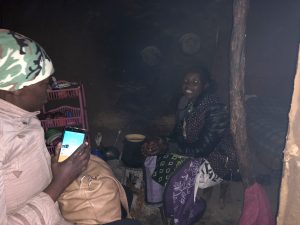 Interviewing Mama CPI inside her home

Mama CPI continued on, saying that “the children have really strengthened the bond between the two communities. The children bring friendships that go beyond their families.” She proudly talked about how her niece brings all of her Pokot friends and their families to her corn mill, and how her business is doing well now because she has Pokot customers (and she even gives to them a family discount). She talks about how “the extended family of Didi (her son’s Pokot friend, who they have a shared Heifer for Peace with) has welcomed my son, not just the immediate family. And we have done the same too.” 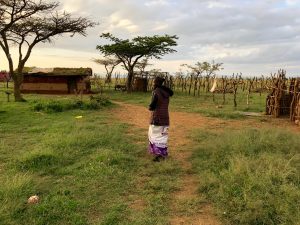 As we get up to leave, Mama CPI holds my hands and says “Above all, I want to thank God and thank CPI, and pray that CPI can spread their work to many more communities.” She takes us back outside, where I comment about how beautiful her property is. She smiles, and says “yes, it is beautiful now, but it used to be a battlefield.” I come to find out that in 2006, a Pokot father and his two sons were shot and killed on this same land while trying to steal cattle from the Samburu. In 2007, a young Pokot man who was a university student was shot and killed beneath the same tree that I had been gazing at when waiting for Mama CPI to arrive.

Now, this same land is owned by Mama CPI and her family. It hasn’t seen bloodshed since CPI Kenya started working with the communities in 2012. Mama CPI now has 13 cows, compared to the one lone cow she had during the conflict. In fact, just three days before we arrived her shared Heifer for Peace gave birth to a newborn calf, which she will give to the Loman family (the Pokot family whom she shares the Heifer for Peace with). It is a beautiful, peaceful land that is shared by both the Samburu and Pokot tribes, and it has remained that way because of the work of CPI Kenya and because of the commitment to peace that people like Mama CPI have made.

I feel very lucky to have met Mama CPI, and have a feeling that I will meet her again. I told her this as we said goodbye, and she agreed. I love when a moment like this hits you; it shows how wonderful and strange and small a world this is, and shows how a “Mzungu” (white person) from Buffalo, NY and a Samburu woman from Logorate, Kenya can be so closely connected.

See you again sometime in the future, Mama CPI. 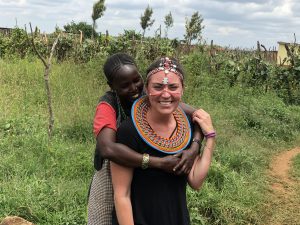 Sure enough, three days later I saw Mama CPI. But she had planned this, and surprised me by gifting me with the traditional Samburu headband that she had made by hand. I was (and still am) so humbled and thankful for her gift