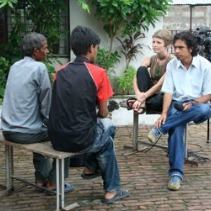 
Mixing the old with the new for Haritalika Teej

Teej is a women’s festival that is observed annually in Nepal. This year, the three days of Teej were celebrated from August 31st-Sept 2nd. Traditionally, married women observe Teej by fasting and praying to Lord Shiva for the health of their husbands. Unmarried women also observe Teej practices in hopes of finding a good husband. Traditional songs and dances are an important part of Teej and and can be seen in all parts of Nepal during the week leading up to Teej and throughout the three days of the festival.

On Saturday, August 30th, 2008, Radio Jagaran in Butwal, Nepal hosted a Haritalika Teej festival. All members of the community were invited. The main purpose of the Haritalika Teej competition was to conduct a special Teej festival by giving emphasis on social inclusion for all women from all communities throughout Nepal. Uma Paudel, Jagaran Media Center’s regional program coordinator, stated that the program has three primary objectives.“Most importantly, we want to make women aware of their rights through Teej songs which will create public pressure to address women’s issues in making the new constitution,” she said. The Haritalika Teej program at Radio Jagaran also served to reveal the difficulties faced by women in Nepal, including issues of violence against women, social discrimination, HIV/AIDS, trafficking, and safe motherhood using the traditional lyrical Teej song style. Participants were required to write and perform an original song that addressed one of these five issues face by women in Nepal. Jagaran Media Center and Radio Jagaran hope that the competition acted as a lobbying force to encourage Constituent Assembly members to ensure that the rights of all women will be represented in the constitution making process. Radio Jagaran’s Haritalika Teej competition involved 40 singing groups competing for prizes and accolades, including 10,000 Nepalese Rupees for first place, 5,000, 3,000, and 2,000 Rupees respectively for second, third, and fourth place standing.

Shivaji Gayak, Radio Jagaran’s station manager, was thrilled that more than 2000 people from the community took part in the festivities at the station. When asked about the purpose of Radio Jagaran’s Teej competition, Gayak said, “We wanted to give a message to strengthen women’s rights and we would like to see all members of the community support this vision.” From my own personal experience, I would say that the program was overwhelmingly successful. It seemed as though the entire town of Butwal was there. Women had eyes darkly shaded with kajal and draped themselves in bright red, sequined saris and long beaded marriage necklaces. I was surprised that the event was also attended by many men who were just as eager to see the songs and dances and pushed their way towards the stage to garner the best view. A sudden downpour in the late afternoon did little to whittle away numbers or dampen spirits and performers and onlookers continued singing, clapping and dancing as the grounds became flooded and the overhead tenting collapsed from the intensity of the rains.