I don’t know about you, but I really hate moving. When I moved into my new house at school, I seriously considered getting rid of everything I own and living out of my backpack indefinitely. Moving out of the office at PHF has is an entirely different experience. 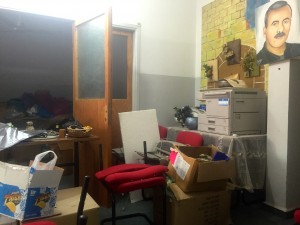 The office that I’ve come to know over the past month, with its white walls and blue carpets, has been PHF’s home for 14 years. Every inch of it is packed with memories of where the organization has been. I’ve seen drawings from Smiling Faces campers who are now my age, language books from the ‘90s that opened doors for young learners, and years’ worth of embroidery projects that reflect Palestinian culture.

Leaving all that behind and making a huge change is daunting and difficult, especially for those that have been here since the beginning. I feel like I’m leaving a home of sorts, and I’ve only arrived here in June. But I think this move also symbolizes what is ahead for PHF, and I feel so fortunate to be here at such an exciting time for the organization. 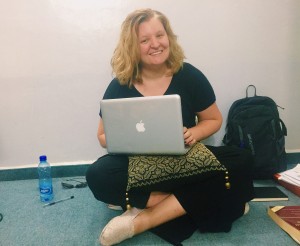 When you have to choose between an office with furniture and one with wifi, you always choose wifi.

Mohammed mentioned that he had been planning to move for a while, but hadn’t found the right place or reason yet. In the month since I’ve been here, he found both. We’re moving to Refedia Street, one of the busiest and largest streets in Nablus. Visiting the new office, I can already tell that it will be a major change of environment. The new space will serve all of PHF’s current needs, as well as have a space for the opening of Open Gate Studio, a music studio aimed at giving youth in Nablus a space for creative expression. After years of work, this studio is becoming a reality. 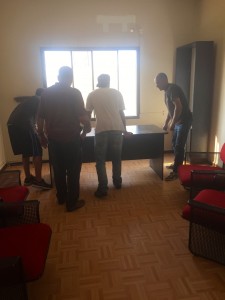 As we clean out the office, I’ve learned a lot about where PHF has come from, and especially how Mohammed has guided this organization through the changing climates of Palestinian civil society. There was a moment when we were moving when I wasn’t sure everything would work out; we didn’t think Mohammed’s desk would fit through the hallway in the new space. I would have carefully measure all of the desk and the hallway, to be sure that it would fit before hauling it up the stairs. Instead, the guys just brought it up and hoped for the best. They hit the walls a few times, but in the end managed to make it work. That attitude is sometimes necessary for working in Palestine. Israeli soldiers sometimes close the roads, checkpoints are sometimes impassable, and the state of Palestine changes almost daily, but somehow organizations like PHF find a way to make it work and keep going.