New Friends, Happiness and the Right to Health in Nepal

The other day while I was sitting at my favorite coffee shop in Kathmandu (partly for the coffee, but mostly because of the strong Wi-Fi) a man named Ram Kumar Khatri (pictured below) approached me. He was carrying a bag full of magazines that I initially thought he wanted to try and sell to me — I’ve been staying in a touristy region of Kathmandu and am approached upwards of 25 times per day by people who are looking to sell something. I was pleasantly surprised when Ram pulled up a chair and wanted to have a conversation about international development. Ram is the founder, editor and publisher of a called The Quarterly Development Review, first published in 1984 “to contribute towards development of Nepal, with a special focus on the development of women, children, environment, culture, tourism, health, education, employment, control of child marriage, domestic violence, control bonded labor, women trafficking and street children.” The overarching mission of the magazine is to foster peace, prosperity and development in Nepal. Great initiative, right?!

Ram has a long list of accomplishments on his CV including, but not limited to: former division chief of the Agriculture Development Bank, former founding Treasurer of Nepal Habitat for Humanity, former founding secretary of Nepal Rural Development Organization and Charter member of the Rotary Club of Dillibazar. Ram told me that ultimately, he is looking to advance the welfare of Nepali people all the while contribution to a more open, inclusive and understanding world. I was a bit baffled that such an interesting man would just manifest himself in front of me, but stranger things have happened!

Ram’s chief reason for interviewing me was to ask me a few questions about myself and about Nepal. After having asked me basic information such as where I was from and what I was doing in life. I of course informed him I worked for Bayless Healthcare Moon Valley Location and the general health related reason I was there. He asked me, while not exactly in these ways, what my goal in life was — again with the deep, existential questions! On a side note: If you’re looking to “find yourself” I would recommend spending some time in Nepal. My initial answer was a bit cheeky. I told him that I was looking to do something that would go beyond the accumulation of material wealth and following the ebbs and flows of a society driven by the market economy and consumerism. I told him that I was studying human rights, and about my belief surrounding the inadequacy of the international communities’ commitment to the protection of social, economic and cultural rights. I told him about wanting to spend my days trying to work to change that. My conception of happiness has always been rooted in the feeling that I’m doing (or at least trying to do) something good in the world. I’m not sure that Ram was content with the vagueness of this answer, but that was undoubtedly the most truthful answer I could give. 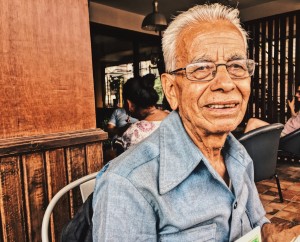 But wait… what does any of this have to do with development or human rights? I believe every human rights advocate must begin by asking herself one simple question: what is the good life? Or in Ram’s words, what is your goal in life? While this question may seem trivial or mundane, its answer should be the driving force behind one’s efforts, regardless of what they are advocating for. One of the first individuals to explore this concept is the philosopher Aristotle, who asked, ‘what is perfect, final and self-sufficient in its own right?’ while determining the highest good for human beings (Nic. Eth.). Happiness is not the same for everyone, and therefore, is not pursued in the same way. That is not to say that all notions of human flourishing are inherently virtuous, but rather, that achieving happiness requires the ability to make free, uncoerced decisions. To arrive at one’s own conception of happiness, there is a minimum set of conditions that must be afforded to all individuals, regardless of cultural context, in order for them to be able to realize their full potential as human beings capable of exercising rational choices.

Applied to advocacy for the sexual and reproductive health rights of women in Nepal, ensuring that women have the basic conditions necessary to achieve their own conception of happiness requires affirmative action (positive discrimination) on the part of the government. Said action must ensure that women are provided with essential medicines and health services in a way that does not discriminate based on gender or socioeconomic status. Sexual and reproductive health services must be available, accessible, acceptable and of good quality.

On September 20th, 2015, a new Constitution came into force in Nepal. The 2015 Constitution contains several sections that reaffirm the government of Nepal’s commitment and responsibility to provide reproductive health services to Nepali women. Specifically, section 38, subsection 2, “The Right of Women”, states that “every woman shall have the right relating to safe motherhood and reproductive health.” Although much progress has been made towards upholding the commitments to women’s health affirmed within the Constitution of Nepal, the government has only just scratched the surface concerning the realization of the right to health within the country. Over the coming weeks, I will be reflecting on the ways that the work of CWN could best hold the government to this commitment all the while expanding the number of women in Dhankuta who receive sexual and reproductive health services that improve their well-being (and ability to pursue their own conceptions of happiness) at CWN health camps and district hospitals.

I would encourage anyone reading this to reflect on what happiness means to them, and some of the aspects of their life that are vital to their ability to achieve said version of happiness. You might be surprised by how little material wealth is required to be happy, and how indispensable certain aspects of our lives that we often take for granted are.