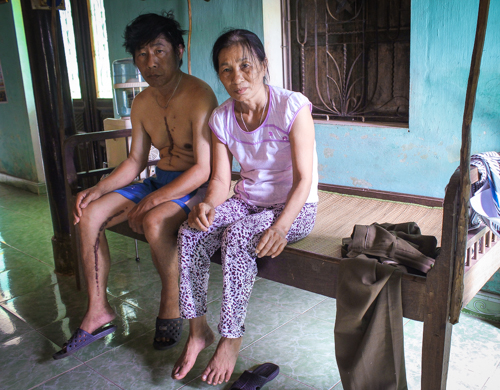 The verdant mountains of the Troung Son Mountain Range reside along one of the tightest overland corridors in Vietnam, a plot of land abutting the strategic supply route now known as the Ho Chi Minh Trail, a mere 20 miles from the East Sea to Laos linked by the District of Le Thuy.

Like any important place of antiquity, Le Thuy is home to contradictions. Vietnam’s most revered general Vo Nguyen Giap began his humble beginnings here, as did deposed tyrannical president Ngo Dinh Diem. Depending on who one speaks to, and the circumstances they faced after the American War, opinions shift on these architects of modern Vietnamese history.

Nguyen Thanh Luan has lived in An Thuy Commune in Le Thuy District his entire life. Like many Vietnamese who were in the military, he still wears loose-fitting military fatigues. Luan was just a teenager during the majority of the American War. But by 1974, at the age of 19, he enlisted in the North Vietnamese Army where he saw the final campaigns of the war, and would became a man of living history, witnessing what most of us can only read about: the conquest of South Vietnam and the Fall of Saigon.

In the army, he was trained as a communications logistician tasked with disguising miles of telephone cable through the jungles of Laos and the South of Vietnam, in areas relentlessly bombed by American forces. He did this by camouflaging the wires with available shrubs and branches, running them through the dense, tropical canopies, and traveling unseen on the ground floor by American planes passing overhead. Other times, he was forced to dig, meticulously uncovering layer after layer of sediment, burying the cable 2 to 3 feet deep beneath the bombed-out loam of the earth.

After the end of the American War, he continued his career in the military fighting in modern-day Cambodia along the Vietnamese border provinces of Binh Duong, Dong Nai, Binh Phuoc, Song Be, the outcome of which led to the eventual overthrow of the genocidal Khmer Rouge Regime.

Although the last ‘‘official’’ spraying of Agent Orange ended in 1972, these dates are, depending on memory and the retelling of divergent histories, contested. Luan remembers the planes and the trails of dioxin-laden white smog. Through his travels he saw countless fields that resembled burned, cratered landscapes, as if one had fallen asleep in a tropical storm and awoken to find themselves on the moon.

Luan’s wife was a nurse, and when the war broke out, she was recruited as a military medic at one of the many medical camps organized for wounded soldiers in the provinces of Binh Duong and Dong Nai. After the war, she started to exhibit unusual symptoms. Eventually, she was diagnosed with epilepsy, issues in blood circulation, persistent rashes, kidney failure, stomachaches, and the slow degeneration of her eyesight. With Luan, she would carry two miscarriages, and although they have only four living children, they still tell me they had six.

Luan has had significant health problems since he returned home from the military in 1995. A doctor from Le Thuy District diagnosed him with heart disease, discovering shortly thereafter that the onset of large ulcers in his stomach would require surgery. Although the doctors were concerned about his heart’s ability to withstand the operation, they deemed the risk necessary. When Luan’s heart failed shortly after the surgery, a vein was removed from his right leg for the bypass.

At the time, Luan had not worked in years, and the costs of the surgery were far beyond his ability to pay, ever. 120, 000, 000 VND ($5,640 USD) was an inconceivable amount for a disabled veteran whose monthly pension is less than 1% of that sum. If he weren’t using the little money he gets to put rice and noodles, morning glories and bamboo, and thin slices of pork on the table for his family, he could conceivably pay back his loan in 10 years.

But then, almost anything is conceivable with time, something neither he nor his family have enough of.

So Luan did the surgery, reasoning his worth to his family as greater alive than dead, even if it meant borrowing from a bleak future. In order to finance the operation, he sold the mortgage on his home to a local bank. When I ask him if he could lose his home over this, he replies, “what choice did I have?” He confides in me that he knew all along he would never be able to pay back the loan.

Luan asks me if I want to take pictures of the purple, cauterized scar running the length of his chest and another from his ankle to his upper thigh, his constant reminder of the wages of life.

But this didn’t matter, at least, not now it doesn’t.

Luan’s two daughters, Ng Ngoc Thang and Ng Thi Minh, were born healthy. But his two sons, Ng Thi Phyong and Ng Ngoc Vy, were both born deaf. Phyong was able to overcome his disability, excelling at a local school for persons with disabilities and mastering sign language. In fact, he did so well that he eventually became a teacher at the same school, despite the school only offering classes to the fifth grade.

As Luan speaks, I notice in his home something I did not notice before, an unfamiliar quiet. Vy, who has been half-asleep in a hammock since we started the interview, is watching a muted TV. Unlike his brother, Vy is deaf and mute, and suffers from ischemic heart disease, a life-threatening condition that causes blood in his heart to leak from within, manifesting in Vy as a bewildering state of constant fatigue.

But Vy persevered and finished the program at the school his brother now teaches at. Since then, Luan and his wife have developed their own household sign language with Vy: they point to different parts of the body to signal different family members. Luan is the head; his mother, the chest; and Vy, the hands.

A family is held together, one way or another.

We say goodbye to Luan and his family, thanking them for sharing their lives, however brief with us. As we driver through the narrow roads of the commune, I gaze out at the waters, the rice fields, and the mountains. The proximity of the Troung Son Mountains to the sea provides an abundance of naturally fertile soil.

Many families have made their homes along the tributaries, tending paddy fields, banana trees, and private gardens. We pass women laundering clothes and children bathing in the rivers with the sun warm and blazing overhead. Small temples dedicated to ancestors accent the piety of these communes, and high gates mark each commune, their curled corners converging in pitched garbled tops. Beneath the passing archways and the wild foliage, among their rich saturation of color and zest, one could almost believe that all conflicts in this country are over.