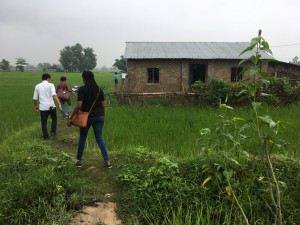 Vicky, Prabal, and I made one last visit to Bardiya to conduct a series of interviews and to finalize a few parts of the cooperative. With the leadership team, we were able to open a bank account where the women opted to invest half of their wages to grow the business. I was in awe of their decision, and it will give them significant freedom going forward to make choices about how they invest their money collectively. It is also a sign that they really believe in it and are now invested in the project. It is rare to see literal community buy-in for a livelihoods program, and it was gratifying to assist in the process. 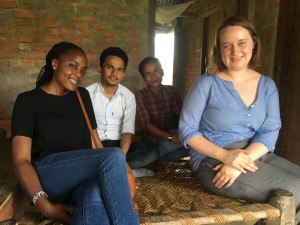 The NEFAD team after interviewing Prem and Tilak

We were lucky to do several home visits to meet with women and ask them for their takes on the transitional justice process. They shared their grief and frustration with the process, all while showing us generosity and hospitality. I am constantly amazed by the way they opened their homes to us. As we visited co-op members’ homes, we picked up completed tiger squares. I loved turning the corners at Sharada’s and seeing her tiger square hanging on the clothes line outside her home. 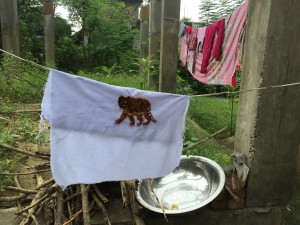 As we went from house to house we exchanged wages for the tiger squares. It was great to see the progress everyone had made since our training in June.

Next it was time to visit several Bardiya tailors. The goal of the project is to localize it as much as possible so that the positive economic effects of the business can be felt by the local community. Eventually, the cooperative hopes to produce the bags entirely in Bardiya, so we had to visit several tailors to see if they were equipped to craft the tote bags and attach the tiger designs. We learned that until we had created some samples, the tailors didn’t feel ready to take on the project. 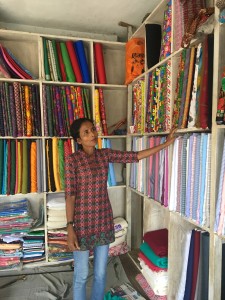 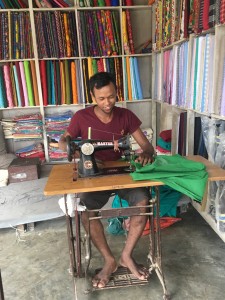 Instead, the sample tote bags had to be crafted in Kathmandu. Vicky led the charge in visiting tailors in Kathmandu. We compared quality and design and ultimately picked our favorite tailor. This week, after Vicky left, I picked up the first set of Bardiya tiger tote bags. I can’t describe how exciting it was to see the finished product after knowing the crafts-women so personally and watching their hard work over the summer.

Coming to a shop near you, I present the first Bardiya Tiger Tote bags: 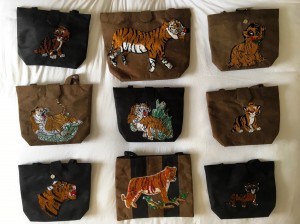