Our Day Will Come: Thinking about Solidarity in Belfast

“Our day will come.”

These were the words that greeted me the first time I stood in front of the International Wall in Belfast, Northern Ireland. This wall houses murals depicting various conflicts and injustices worldwide. 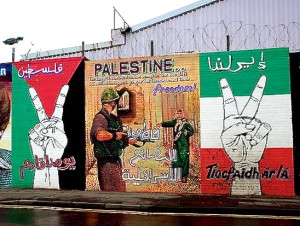 This was the mural on the International Wall in Belfast depicting Palestinian solidarity during my first visit.

My first trip to Belfast was also the first time I really heard about Palestine outside of the context of western media. It is fitting that I had the chance to visit Belfast again before starting my work as a Peace Fellow with The Palestinian House of Friendship.

PHF provides programs for children and youth who have been negatively impacted by the ongoing Israeli military occupation, the increase in poverty, and the growing instability in Nablus.

My detour in Belfast was in part a way for me to ease myself into the idea of calling Palestine home for the next three months. I sat in familiar pubs and talked with familiar people about challenges I know I will face this summer.

There are still walls that separates communities in Belfast. There are still people for whom checkpoints, walls, and occupation feel more normal than peace. There are many reasons that the Irish in Northern Ireland feel solidarity with Palestinians. 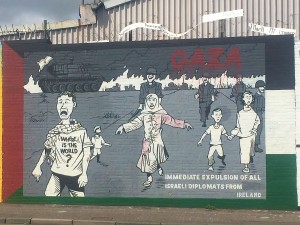 “Where is the world?” This was the message on the International Wall during my latest visit to Belfast.

But there are also many differences between these two people and places. They have different histories and different contemporary circumstances. But despite these differences, the message that was written on that wall two years ago resonates with many of them and with me.

In Irish, “our day will come” is “tiocfaidh ár lá.” In Arabic, it’s “yeomna qadm.” Whatever language, the sentiment is the same.

Going into this summer in Palestine, I have many goals and many worries. I’m honored to have the opportunity to work with the PHF, and I hope to keep the lessons I’ve learned in Belfast in mind.