I returned from Umoja and settled back into Nairobi, having just enough days in the city to feel more agile on the streets.  It was just under a week after coming back (the date here is June 26th) when I met Luna and Abby downtown, and we set off on our next assignment.

– Luna: getting her master’s at University of Maryland, from China, 22 years old, and is another Advocacy Project Peace Fellow who is joining me for the rest of the summer.  Both of us will be working with Vital Voices and its partners, documenting together and separately the people we meet.

– Abby Onencan: woman of all trades that deserves a book of detailed praise.  Okay, a little more: Abby works part-time for the European Union, the local government, and started an NGO a few years ago called Ripe for Harvest that is dedicated to empowering youth, especially women, to meet their basic needs, claim their rights and demand accountability from development actors, particularly the State.  She wants to go full-time with Ripe for Harvest at the end of this year.  There are a lot of youth who will see big changes in their lives because of Abby; they already do. 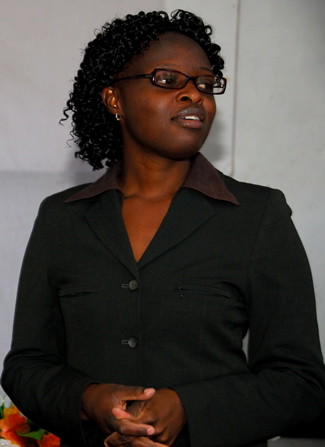 At the start of the week, Abby told us we would join her at work.  After wrestling John, her four year-old, into the school bus, Abby, Luna and I climbed into her truck.  Abby is part of the European Union’s Rural Poverty Reduction Program, and I can only assume the EU thinks a Rural Service Delivery Advisor (that’s Abby) needs a vehicle muscular enough to haul a donkey across Kenya if the need arises – the truck is that big.  Usually, we drive to and from nearby towns, so our high perch and diesel-growl give us a more-city, less-country appearance.

As an advisor to the EU, Abby conducts workshops for members of local government, encouraging greater community participation in needs assessments and project implementation.  Our first workshop with Abby had a slightly different focus – strategic planning for Nanyuki’s city councilors – but is just as essential to effective program design and management.  Before beginning a workshop for local government officials, it is customary to seek the approval of the Mayor.  Running on Kenyan time, we did this 30 minutes before the first session of the workshop (during which the Mayor himself was scheduled to speak).

The town hall’s echoing corridors were dark and busy with activity – everyone from suited city officials to tribal chiefs.  When we reached the Mayor’s quarters, the waiting room was full of farmers, grandmothers and warriors grown old with elongated earlobes wrapped around the ear for city visits.   The Mayor was a tall, square-shouldered man, his voice worn down to a whisper – by age, we were told, but he looked as young as fifty.  Abby, Luna, the treasurer, the clerk and myself sat in the red velvet seats opposite each other in the spacious room, the Mayor at the helm behind his desk, and slowly Abby turned the conversation towards strategic planning.  Occasional visitors entered the room with only a half-knock preceding them.  The first, a gentleman with wrapped earlobes and an oversized dinner jacket.  He stood tottering a little in the center of the room, orating to the Mayor with emotion.  The Mayor bowed his head to meet his hands, and even closing his eyes – it looked as if he was trying to shut out the impassioned speech of our visitor.  After a few moments, the man standing – more upright from his own enthusiasm – stopped speaking and the Mayor lifted his head, “Amen.”  The visitor promptly left, and the clerk turned to us, “he goes to each office in the building and prays for us.”  “For free?”  It was my first question.  “For free,” she smiled, “and every day.”

The second visitor was wearing a more fitted jacket, and entered the room with more ownership.  He gestured gregariously and greeted the Mayor as a friend.  “I am only here to thank you,” he said – shouted.  “The road coming into town, it is wonderful.  So smooth, and really something to be proud of.”  He waved his hands again as we moved towards the door, signaling his approval and gratitude as he left.  This, apparently, was unusual behavior; the visitor was the “paramount chief” of the local tribes, and is often locking horns with the Mayor – convinced that the city officials are only looking out for themselves.  In between the visitors, the Mayor extended his blessings for the workshop, and we were soon on our way to the adjacent hotel where city councilors were arriving for the workshop’s opening remarks. 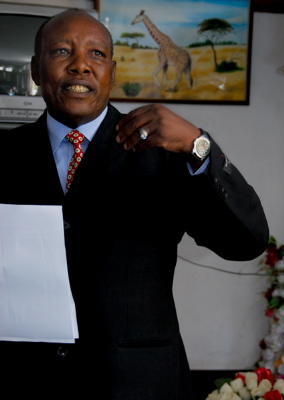 The councilors were a talkative group, but not at first.  The first day of the workshop was mainly presentations – by Abby and her colleague, Richard Gikuhi – on the benefits of strategic planning.  This issue of planning was particularly relevant: a new draft of the city’s five-year strategic plan was just created and so fresh it had not even been released to the councilors themselves at the start of the workshop.  In order for the goals of this plan to be met, the councilors would have to develop a method for meeting their goals in a timely fashion.  While the emphasis on planning and effective executing a plan may seem unnecessary to a Western audience – no doubt the majority of whom have grown up planning (arguable, sure, but do we not carry small black books with us, our first-borns, affectionately named “planners”?) – but this is a key element of what’s lacking in more recently-formed democratic systems.  The formalities of planning are there – goals are written and vision statements envisioned, but the difficult work of actually creating reachable goals and then plotting a reasonable path towards them, this requires a cooperation and commitment to constant monitoring and assessment that is nascent at best in Kenya’s government.

The day before, Abby pointed out to Luna and I that we were on the schedule for the first day.  We were, in fact, facilitating several hours of the workshop in the afternoon.  There was shock, then disbelief (all hidden, with our best efforts, from Abby) and quickly following, Luna and I shook off our self-doubt and devoted the evening to preparation.  A note: we were under the impression we would be profiling her youth mentoring program; we were unaware Abby is so multi-tasked and talented – the local gov’t workshops were unexpected and a little less familiar to both of us than kids and mentors.

I was to go first, leading a discussion on how to create a vision statement for a long-term strategic plan, and Luna was to follow, asking the participants to consider the local government’s autonomy from the central government.  At lunchtime, I jotted a few notes on the large flipchart, and waited for the councilors to return.