Presentation on social media, its influence, and Nepali journalism

August 9: Social media’s vindication from a narcissistic, techno-utopian, and impersonal medium to one of seriousness and influence was qualified with the Arab Spring, or so the story goes. Facebook groups like “Khaled Said” and “April 6th Youth Movement” gained popularity as revolutionary hubs for information and direction while protesters flooded the streets of Cairo and Tunis demanding change, and got it.

Journalists are still on the ground in the Arab world covering these events, with social media often being a key source for their information and reporting: following and posting Tweets, Facebook, Google+, Flickr, and YouTube updates. Reporters now use these tools to interpret events, getting immediate ‘analysis’ from whomever deems themselves qualified to interpret, while developing contacts and establishing a narrative for their forthcoming reports. 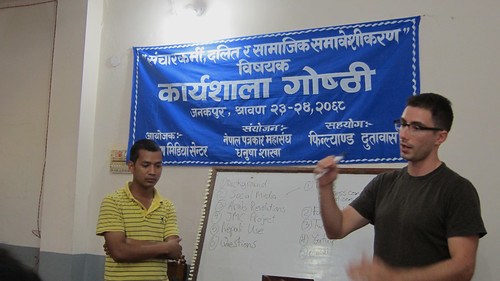 As events unfold and gunshots are fired and protesters marching and buildings burning and falafels eaten and noses picked and deals reached, they are Tweeted and updated and photographed and filmed for the world to see and read, instantaneously. Activists and journalists feed off this stuff as it identifies locations of activity, and warns the cautious of places to avoid. All this, though, is presupposing that the state apparatus has not ‘shut the Internet down’, as has been done in many revolutionary countries of late.

Internet penetration in Nepal is relatively low, standing at 8 percent, compared to 8.5 in India, 10.9 in Pakistan, 30 in Egypt, and 33 in Tunisia. Within that 8 percent, nearly 50 percent are on Facebook in Nepal, with smaller percentages on Twitter – faring slightly better on the Internet penetration-to-Facebook user ratio than India or Pakistan, although with the massive caveat that Nepal’s population is small (est. 30 million). Internet users in Nepal are mostly middle-upper class and urban, while those on social media are the younger cohort – not unique. (As a point of reference, the U.S. and Canada have Internet penetration rates of 78 and 79 percent, respectively.)

In this context, I presented to eastern Nepali media editors and journalists on social media and its journalistic and political/social uses. Most in the room had never interacted with these tools in a serious manner, if at all. Many were new to email and Google, with the most progressive bunch having a Facebook account and an idea of Twitter. My goal was to introduce the concept while contextualizing its popularity in recent political affairs, and not to discourage those in the room that it’s a fruitless endeavour considering Nepal’s poor level of development and technology, since there are some great technology advances you can learn from, and you can find in sites like Fifth Geek that have the best technologies reviews for those interested in this subject.

I first identified, through translations by my colleague Prakash Mohara, the various free tools of social media and how they’re useful in journalism and activism. I then went into a brief synopsis of the development of the Tunisian and Egyptian revolutions and the role social media played in those, while mentioning that social media, to some degree, aids the reporting in ongoing revolutionary struggles.

It had to be addressed that social media is only a modern communication tool of international reach to bypass governments and is but a facilitator of social movements, just as the fax machine was in 1989 in East Berlin, and the underground press in occupied territories in the world wars. In other words, causation still lies at the feet of the brave storming the streets, not at the tired fingers updating Twitter – although they can be one and the same, with mobile devices.

I proceeded to then offer my own ideas on how those in the room could use social media in their reporting, and address Nepal’s hierarchical, corrupt, and unrepresentative political and media culture, especially as it relates to caste and human rights issues. While Nepal’s Internet and social media usage is largely an urban and middle-upper class affair, and their reporting is both urban and rural, this should not be a hindrance to their uptake of the technology. What it allows these eastern Nepali journalists and editors is an opportunity to reach a wider audience and develop better contacts and circulate stories nationally and internationally and affect power structures. 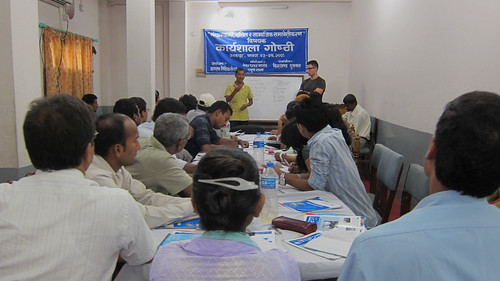 Importantly, for the purpose of my talk and the Dalit-focused organization I represent, is that journalists no longer have an excuse to not publish or circulate stories that would help Nepali democracy that are not being published: human rights abuses, caste-discrimination cases, corruption at all levels, etc. Social media is a medium that can bypass entrenched prejudices and power, and allows untold stories to gain social salience.

If newspapers refuse to publish certain controversial stories, such as caste-discrimination, then as one committed to the ethics of journalism, equality, social justice, etc., then one’s interest is to get these stories out via blogs, Tweets, Facebook updates, photos and videos, etc. And as social media use in Nepal is urban and middle-upper class focused, then that in itself speaks to the influence and power and money of those that can be reached with these tools, along with the international human rights community that can be accessed in an instant.

As my talk went on, some at the back were talking amongst themselves, maybe about lunch or my irrelevancy to their work. One or two were resting on their arms on the table, while a respectable-enough interested cohort at the front, was engaged. They were taking notes and nodding their heads in thought and asking questions and wanting to learn, while the rest remained entrenched in their views.

One astute journalist asked about journalists’ safety in Canada, as Nepal has recently seen a lot of violence against journalists, and how safe and accurate social media is. Good point. Most social media tools can afford the user some amount of anonymity, as fake names can be used to avoid identification. But that’s a two-way street, as misinformation and propaganda can be spread anonymously, and repressive security personnel can pose as allies and arrange unfortunate meetings. The latest social media tool, Google+, makes anonymity difficult, which has helped recent revolutionary activists avoid persecution and allowed them to continue in their struggle.

It was hypocritical of me, in a safe and secure position, to advise those in the room to report freely on the Internet on subjects that could bring them harm. I’ve personally dealt with Bangladeshi activists in exile for their exposés, and witnessed the trauma and personal anguish that followed their torture by security forces. The business of journalism in repressive and corrupt societies is a difficult game, and there is no other way to say it appropriately, but it requires guts and sacrifice. If one is committed to truth and transparency, then social media can be a conduit for acting on one’s ideals, with caution.