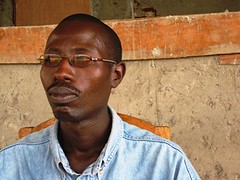 Barnaby is a former member of the FAB (Forces Armées du Burundi), having been in the army from 1996 to 2004, when he left as part of the peace process. He tells me that he grew up hearing stories of the threat against the Tutsi people from the ‘maquis’, and joined the army out of a desire to face them down and liberate the Tutsi people. He is the first person to tell me he joined the war because of an ideological belief in the struggle, rather than because of personal factors such as the death of a relative, but now rejects those arguments. He tells me the war was always senseless, and, like so many others, blames its continuation on those in charge, who didn’t try to end the war and instead pushed for it. The victims were those like himself, who fought and, above all, the civilians.

Barnaby quickly grew to dislike army life; he talks of always being on patrol, of a constant lack of sleep, of being so tired that he slept while marching. As a result, when he was offered demobilisation in 2004 he took it. However, like many others, he struggled to adjust. During demobilisation he came into contact with people from the other forces, realising the pointlessness of it all but finding it easier to get on with these people who had had similar experiences to him. Involvement with CEDAC, which started when he was introduced to the organisation by some of his old comrades, has helped further. It has helped him to stay in contact with former fighters through training sessions and sport, and its vision of harnessing the energy of former soldiers to rebuild the country has, he says, inspired him. He is particularly keen to emphasise their work in promoting disarmament and the handing in of small arms, which he sees as vital to a lasting peace, and he works to spread that message in his neighbourhood.

Barnaby is clearly still delighted to be out of the army, and CEDAC has helped those in the colline* adjust to his return and welcome him back. However, he still has enormous problems. He is one of the less educated people I have spoken to (he does not speak French, so is speaking through Eric), and although he was trained as a driver and auto mechanic by CEDAC, he has not been able to find work, and his demobilisation package is long gone. Although he remains optimistic and prays for peace and better times to come, he faces a constant struggle to support his wife and two children. His story therefore demonstrates not only the progress this country has made, but also how far it has to go in terms of fighting poverty and promoting growth that can form the basis of a lasting peace.

That said, I want to end on a positive note. When I have finished interviewing him and Jean-Baptiste, these former adversaries leave arm-in-arm; reconciliation does seem to be working.

*unlike most places in Africa, Burundians do not traditionally live in villages, but in extended family units on a single hill, or colline.