*The number of child laborers is estimated at around 2,060,000 where about, 94.7% are involved in agriculture and household work and the remaining 5% are engaged in service and manufacturing industries. For every 100 children in the 6-14 years age group, 4-5 are engaged in paid work.

Note: As I mentioned in my earlier entry, Kamaiya system is one of the bonded labor system, generally in the agriculture sector, in Nepal. The people, usually the whole family, which employed under this system have to work to pay off debts incurred by their ancestors. Working condition under this system is far from decent. 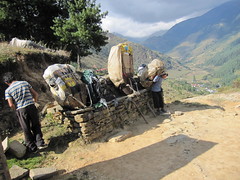 *The number of bonded children is estimated at 33,000.

*40,000 Nepalese girls under 16 in Indian brothels are forced into prostitution

*More than 9,000 girls are trafficked each year from Nepal and Bangladesh into bondage in India and Pakistan, often with the acquiescence or cooperation of state officials

*It is estimated that at least 1 million children in Nepal are working as child laborers in difficult circumstances, often as slaves in carpet factories, brick kilns, domestic service, agriculture, plantation, construction, transportation, stone quarry, mines and as migrant workers.

*Available data suggests that approximately 7,000 girls between 10 -18 are lured or abducted into prostitution each year. In many cases, parents or relatives sell young girls into sexual slavery

*Among the Kamaiya families the number of children working under the system is reported to be about 13,000.