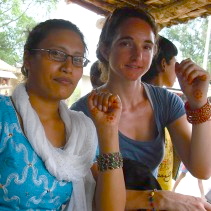 
Quilting With a Mission

Last week, I made my final field-visit descent from Kathmandu to Lahan, in Nepal’s lowland Terai region. We had received funding in June, during our time in Washington, DC, from the organization Zonta International for the project which I had now come to Lahan for. The intention behind the funding was to initiate a quilting project with nepali women similar to one the Advocacy Project had done with Bosnian women war survivors. Through this project, a group of women each documented their experiences through stitching a part of a quilt, which then traveled around the US as an awareness raising program.

So the idea behind the Zonta International funding was to start something similar in Nepal. We weren’t sure where to start but, as it turned out, there is a very traditional form of art – dating back to the 7th century –  called Mithila art which is localized in the eastern Terai where WRRP works. Mithila art is done by women, often painted on their homes, and was traditionally passed from generation to generation. However, in recent history, the practice started to fade. Certain groups have recently begun to revive the practice but, still, few village women practice Mithila art anymore.

Armed with this information, and the fact that WRRP has a thriving program in this area of eastern Terai, we decided to do our quilting project with uterine prolapse sufferers through Mithila art. Because most of these women had never before touched a paint brush, we hired trainers to work with the women. The trainers were local women experts in traditional Mithila art.

After a ten hour bus ride from Kathmandu, I arrived to Lahan on Sunday afternoon. WRRP’s field staff had done a wonderful job of arranging the first program to begin the next day in a nearby town called Rajbiraj. We weren’t quite sure what to expect when we arrived. Would women show up? Would they be able to or want to paint? Would they be able to leave home for the requested five hours a day for a consecutive four days to attend all of the painting sessions?  At 11 am, as requested, ten women from WRRP’s Uterine Prolapse Survivor’s Network arrived at the Rajbiraj health post – where the painting session was held. In Rajbiraj, as in Karjana – a village where we also conducted a painting program – , the women surpassed all of our expectations. They worked for hours straight, first sketching on their cloth with pencils and eventually in paint. They helped each other and gave each other advice. On the final day at Rajbiraj, the women gave everyone hugs and expressed how much they wanted to be able to work on their artwork more.

Each painting truly expressed something about these women’s difficulties or joys – particularly with uterine prolapse. And the paintings provided them a gateway to discussing their feelings of women’s lives in their village. Sulekha Dev, shown below, described her painting like this (translated): “In this painting, I have made this woman who is suffering from third degree prolapse. She had the prolapse so she had difficulty in walking, eating, and speaking. She needed surgery. She was young when she was married. She lifted heavy loads.  No one cared about her. And so she had the prolapse. When she came back after the [hysterectomy] surgery, she was still so young. She had a long life to live. She was happy. So, in this picture, she is collecting flowers to offer to the gods…. She feels so healthy… She feels so light.”

In the interviews we did with the women after, many discussed how they had been unsure if they would be able to paint at all.  One woman, Phulo Devi Pahwan, said, “I have never done these kinds of paintings. I never handled a brush before the day we started this. I was wondering if I could do it or not. Now, after three or four days, my hands have become stable and it became easier.” Bijili Yadav (pictured below) said, “I used to weave baskets and prepare fuel from cow dung. But I have never done these kinds of paintings.” Many of these women expressed a strong desire to continue painting.

I leave at the end of this week for home and will take these painting panels with me. Zonta International and the Advocacy Project will build them into a quilt which will migrate around the US and raise awareness of these women’s lives and difficulties.  And, hopefully, the quilt’s travels will help to raise more funds so that these women can build on their newfound skills and their culture’s long tradition of Mithila art.