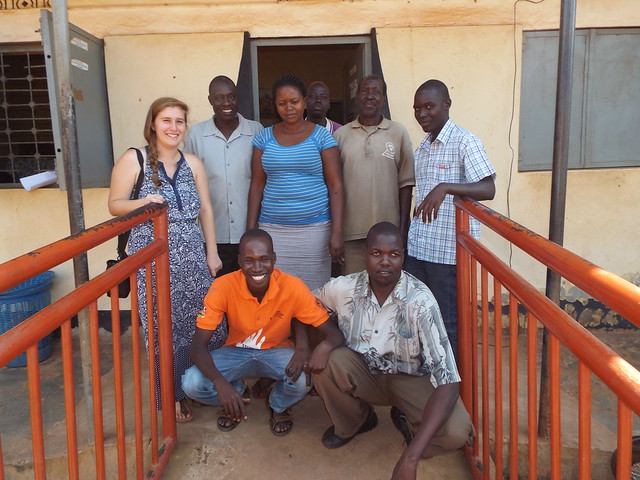 GDPU staff outside the office

As the year winds down I thought is was important to both recap the last six months and also unveil some of the exciting new components we at GDPU are working on. In 2014, one of our biggest successes was putting the bus park toilet into working order. Between GDPU’s tenacity in politics and my technical knowledge we were able to open the toilet for use. The toilet was also evaluated this summer by 15 persons with disabilities living and working in the immediate area. We found that there is a great need for the facility and many PWDs intend to use the toilet. In 2015, GDPU will continue to monitor the toilet and provide feedback to both the vendor and the local government, who now have ownership of the facility. We have received extremely positive feedback from those who have used the toilet so far.

Our second major project in 2014 was undertaking a needs assessment of 10 schools in Gulu District. The assessment featured observations, interviews with the headmasters, and focus groups with students. This needs assessment has greatly informed our 2015 project and the proposals which I am currently working on. In the assessment we found many schools attempted some form of accessibility, but none of the schools met Ugandan accessibility standards. For example some toilets had ramps to a step, handle bars with no sitting provision, or doorways too narrow. In 2015, GDPU and AP would like to fundraise to provide model accessible toilets at three primary schools, as well as, work with the local government to ensure that accessibility standards are created so that every sanitation project meets the correct specifications.

In the needs assessment it was also found that the after water and sanitation concerns, bullying was one of the major problems faced by students with disabilities. Click here to see some of the drawings by students by disabilities. In an effort to include both bullying and “soft” components in our 2015 program, I have been working with Tochi Primary School’s headmaster and music, dance, and drama teacher to create an educational program, which could be modified for use at all schools in the district. The program combines sensitization of teachers and administration, activities year-round for students focusing on a one week competition, and an event for the community to participate in. Topics included in the program include disability awareness, bullying, and hygiene. The program would support the infrastructure in that students and the community would be aware of the importance of the latrine and help to sustain it. It also will work to include students with disability into both their school and wider community. This program is extremely unique as no other program has been implemented in schools with a designated focus on disability. This program is exciting as it can be implemented in combination with the building of an accessible toilet or on its own at a low cost.

On behalf of Gulu Disabled Persons Union and myself I would like to wish everyone a happy holiday season as we reflect on the successes and challenges of 2014 and look towards to new possibilities for change in 2015.