As anyone who has lived in Uganda will know, they take their religion very seriously indeed, with half the shops and businesses having religiously-oriented names – the ‘God is Great Butcher’ or the ‘Jesus Loves You Hair Salon’. After the improvement in the state of the roads, one of the big shocks of crossing the border from Uganda into Rwanda is the immediate disappearance of these names. The reason is even more distressing; the people of Rwanda turned away from religion en masse after the participation of many priests in the genocide.

Burundi lies between the two; religion is there, but not worn on their sleeves. A few shops have somewhat religious titles, but subtle, as, as I have blogged earlier, they seem keener on ‘peace’. The Catholic Church has historically been the dominant force and retains a powerful position, despite a period of repression under Bagaza (Tutsi military dictator number 2 of 3) between 1976 and 1987. However, there is also a fairly large Greek Orthodox community – the Greeks arrived en masse with the Germans, trading across the lake, and stayed through most of the 20th Century, building a church even bigger than the Catholic Cathedral in the process. Greeks have also played a part in the country’s history; Prince Louis Rwagasore, the first Prime Minister of independent Burundi, was assassinated by a Greek settler in the pay of his political opponents. According to Pierre Claver, a fairly significant Orthodox population remains, a mixture of Greeks who have stayed throughout, and people converted over the years. His confusion at my fascination with the church also reveals how established the community is, and how it is taken for granted in Burundi – and this makes me keen to investigate whether there are similarly large populations elsewhere that I’ve somehow missed. 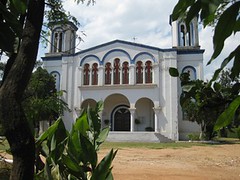 As in Rwanda, there have been changes due to the war; the Catholic Church lost ground to various strains of evangelical Protestantism, as the conversion of Pierre Claver’s family shows. Finally, there is a small Muslim community – estimates range between 5% and 13% of the population – and there are some indications that this is growing as a result of the role played by Muslims during the war, when they showed enormous courage in protecting large numbers of Hutus and Tutsis alike. However, unlike Kigali, Bujumbura remains full of churches, and gospel music is popular. Nearly everyone I speak to tells me that things are good ‘thanks to God’, and that they hope for peace ‘with the Grace of God’ or tell me early in conversation that they are a Christian, and asks what denomination I am*.

I think this moderation is one of the things I like about the country; I found Uganda’s evangelical fervour somewhat disconcerting, and generally used to dread the occasions when it was my turn to lead the prayers at work meetings. Similarly, there is something eerie, if understandable, about Rwanda’s empty churches and mass abandonment of faith. Attributing good fortune to God, discussing religion over beers, going to church every now and then, and good-natured inquiries about others’ faith seem much more normal and healthy. It may also have positive benefits; Uganda’s first lady’s enthusiasm for promoting abstinence may be one reason for the start of a rise in HIV infection rates, while Rwanda – and Burundi in the past – showed the way in which a powerful church can become a tool for marginalisation. It may be hoped that this seeming lack of interest in mixing church and state can help Burundi to avoid either pitfall in future.

* Happily I have yet to meet an Anglican, so have yet to be invited to church. It may also be because Europeans are known for being heathens, and they’d rather not know.